Arm has published a news release which previews the performance of its next two generations of CPUs. In brief, next year we will see the Matterhorn Generation CPUs arrive, followed by Makalu CPUs in 2022. Together these will push the performance bar 30 per cent higher than we see it today with the Cortex-A78 based CPUs. 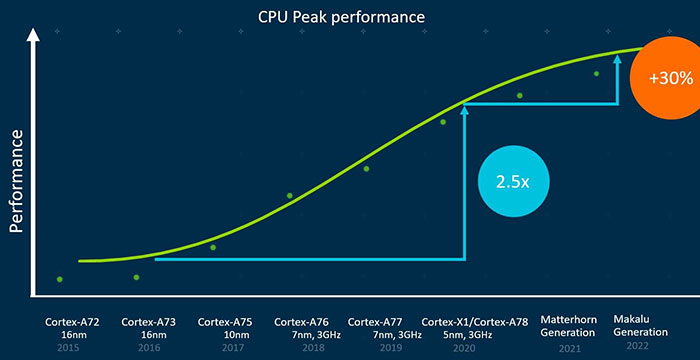 Taken in isolation the above performance preview statement isn't going to rock your world. The graph shows that the rate of intergenerational performance increases is actually slowing with Matterhorn and Makalu.

Arm asks us to look past this unexciting baseline performance increase as it asserts other architectural tweaks and components in the SoC are increasingly important to the performance you experience on your Arm-powered device. The newest energy efficient SoCs sport specialised components for AI and ML workloads for a more rounded modern processing offer. It has previously stated that Matterhorn effectively doubles ML performance over previous generations, for example. Furthermore, Arm wishes to implement its Total Compute strategy starting with Matterhorn. Total Compute is based upon the advancing of compute performance, developer access to the SoC with new software and tools, and enhanced security throughout the ecosystem.

We've already heard Arm predicts its CPU performance will be 30 per cent improved over the next two generations, and it has AI and ML accelerators too, but it expects further benefits to be felt by end users with the move to 64-bit code. The 64-bit code transition will make a particular difference in compute-intensive workloads like AI, XR (AR and VR) and high-fidelity mobile gaming experiences, says Arm. Importantly it has seems to commit to the timeline of 64-bit exclusive support by the 'big' cores from 2022 (Makalu).

The last of Arm's three pillars, alongside performance and software development, concerns security. This is a key pillar to advance mobile computing and build trust in future applications, services, and devices. With the introduction of Matterhorn you will see a new security feature called Memory Tagging Extension (MTE) to harden the memory subsystem from security vulnerabilities.

The above news came as Arm wraps up its three day ArmDevSummit 2020 event, which featured a fireside chat with Nvidia's CEO Jensen Huang during day one (see a snippet of that below).