On Sunday it was the 35th anniversary of the powering up of the first ARM processor. From its unlikely origins the popular RISC processor design has grown to dominate smartphone / tablet computing, and is making bold moves into servers, portable PCs, Mac computers, and Google computers. Figures show that Arm's 1000+ silicon partners have shipped over 160 billion ARM-based chips since the early 90s, with the current rate of shipments exceeding 6 billion per quarter.

Principal designer behind the BBC Micro and the ARM microprocessor, Prof Steve Furber recalled the arrival of the first ARM processor in a Centre for Computing History blog post.

"At 1pm on April 26th 1985, the first ARM microprocessors arrived back from the manufacturer - VTI. They were put straight into the development system which was fired up with a tweak or two and, at 3pm, the screen displayed: 'Hello World, I am ARM'."

The original ARM1 was fabricated on VLSI's 3μm lithography process and contained just 24,800 transistors. WikiChip notes that it had a few major bottlenecks such as lack of hardware multiplication support, made worse by not supporting coprocessors. It is worth mentioning that Steve Furber's most recent / current project is the "world's largest supercomputer brain," dubbed SpiNNaker. 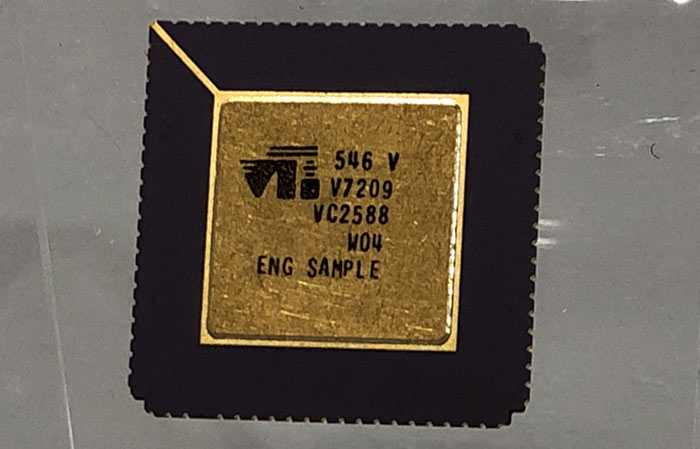 You might be irked by the use of both ARM and Arm above but I've attempted to use both terms correctly; the capitalised version is the original processor and architecture, the mixed case one refers to the company - in its post-Softbank era. Furthermore, ARM changed its meaning twice; originally it was an abbreviation of Acorn RISC Machine, but the name was later changed to Advanced RISC Machine.

While we are down memory lane, other major important computing events of 1985, as noted by the Computing History organisation, were: the Commodore Amiga launch, Microsoft's Windows launched, the Intel 386 iCPU was introduced, NeXT Computers was founded, and the Cray X-MP Supercomputer began operation.

Posted by Rad77 - Tue 28 Apr 2020 11:26
Yep, my second “home computer” after the BBC Micro was an Acorn Archimedes 310 with 8MHz ARM CPU. It was a very early model with a stop-gap version of the OS on EPROMs, which you had to send back to Acorn once you received your RISC OS upgrade ROMs.

It was a total revelation, so fast for the time. It was more powerful than the £20,000 ICL Perq workstation (https://en.wikipedia.org/wiki/PERQ) that I had been using at work just a couple of years before.

But the legacy lives on - there are a lot more ARM CPUs dotted around my house today!
Posted by DanceswithUnix - Tue 28 Apr 2020 11:33
Given the current lockdown, after reading this is it wrong that I now want to go play Virus? (Yeah I know it was called Zarch on ARM, but I think I only ever had a copy on the Atari ST where they renamed it).
Posted by Rad77 - Tue 28 Apr 2020 12:04
That game was so bloody hard! I don't know about the ST version but all I remember is that you could only see a few tiles around and the controls were really twitchy.

Rad77
That game was so bloody hard! I don't know about the ST version but all I remember is that you could only see a few tiles around and the controls were really twitchy.

Yep, I remember lots of crashing.

There should be a VR reboot.
Posted by persimmon - Wed 29 Apr 2020 08:04
All hail to Steve Furber for still being in the game after all these years. Maybe the trick is to make every new project bigger than the last. Or is Spinaker a cluster of 2 million Arm chips?