As it teased back in Feb, Noctua has launched the first member of its new 'redux' CPU cooler line. This is Noctua's approach to taking its highly-regarded PC cooling products and reducing them to the 'core essentials' to produce a streamlined range that delivers the goods while being highly compatible, easy to install, and accessibly priced. It pioneered the redux line by introducing a number of redux branded fans to sell to budget constrained PC builders. 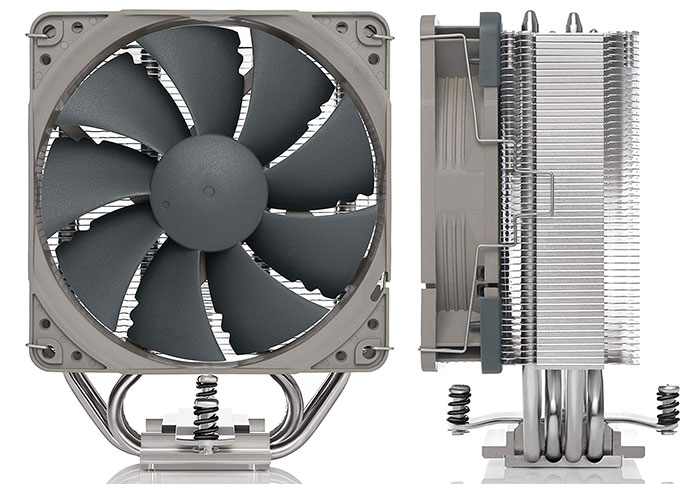 The first PC CPU cooler getting the redux treatment is the award-winning NH-U12S. This CPU cooler was first introduced back in 2013, but Noctua updated its range with a black version in 2019. One of the first things you will notice about the redux model is that it introduces another colour choice – plastics in a neutral two-tone grey alongside white metal parts.

So, in what ways has Noctua wielded the knife in the NH-U12S redux design? As per the above instant visual summary, the redux model uses a NF-P12 redux fan as the active component. This fan is actually capable of pushing 30 per cent greater airflow than the NH-F12 but to do so it uses a higher RPM and makes slightly more noise. Noctua doesn't include a second set of fan clips and adapters with the redux fan, which is another budget conscious change.

Moving along to the metal parts of the CPU cooler, a BOM cost reduction is achieved here by reducing the number of copper heatpipes from five to four. Other than that I am happy to report that the build and materials carry though the same spec as the premium model, all the way down to the nickel plated copper base.

Once at the base you will see another saving, NT-H1 thermal paste has been pre-applied, so you don't get a tube of this gunk in the packaging. Thankfully the Noctua SecuFirm mounting system hasn't been altered. Another nicety is Noctua's assurance that, just like with its premium coolers, "future mounting upgrade kits for the NH-U12S redux will be provided free of charge if technically possible, making it a safe long-term investment".

How much is the price reduxion?

Posted by excalibur1814 - Wed 17 Mar 2021 14:33
“produce a streamlined range that delivers the goods while being highly compatible, easy to install, and accessibly priced”

- To ensure that they can raise the price of their award winning products, as they now have a cheaper option. Top, middle and bottom pricing. Standard marketing to fleece consumers.
Posted by Hoonigan - Wed 17 Mar 2021 16:15
£44 for that is an excellent price. Will be very difficult to recommend a CM Hyper 212 at £30-£35 when that's only a tenner more.

Need to see it reviewed though.
Posted by cptwhite_uk - Wed 17 Mar 2021 16:39
It's their free adapter kits for future sockets which is also a major plus. For my own PCs I will always buy Noctua as they offer superb build quality and performance, and amazing customer service. Still can't believe they shipped a free adapter kit for my NH-D14, 7 years after I bought the cooler …that's commendable.
Posted by cheesemp - Wed 17 Mar 2021 16:40
Seems like some sensible decisions to cut price but for the small price drop I'm not sure its worth the cuts (Although I do prefer the look - I know the whole RGB thing is not popular here but it matters to me).
Posted by philehidiot - Wed 17 Mar 2021 17:11
Depending on how it performs, this might be my next cooler. I'm on an ageing AIO which can't have long left in it and I'm oscillating between a high end AIO (with standard, custom loop parts which are replaceable and interchangeable) and a high end air cooler. If this delivers the goods for £45 and performs as well as the AIOs, it's almost a no brainer.