Few graphics cards have elicited as much interest as the one born from the fruits of Asus and Noctua labours.

Asus provides the GeForce RTX 3070 hardware and Noctua brings considerable heatsink and fan expertise to the table. The culmination of such endeavour is the appropriately named Asus GeForce RTX 3070 Noctua Edition. 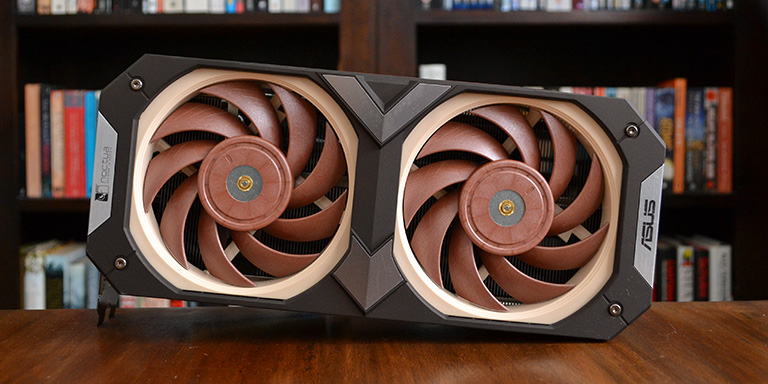 The primary aim of this card is to offer a near-silent gaming experience by, foremost, improving the cooler. To this end, Asus uses the RTX 3070 TUF PCB and cooperates with cooling specialists Noctua in bringing a behemoth of a card to market.

Volume and efficiency are everything in driving noise down. Vital stats border on the alarming. This is a 4.3-slot beast measuring 310mm long, 147mm high and, crucially, 87.5mm thick. Weight is considerable, too, as the sample tips the scales at 1,570g.

Replacing the standard TUF's trio of 92mm fans is the first step for enhanced cooling performance. Noctua uses a custom shroud to house a couple of NF-A12x25 (120mm) PWM fans in traditional beige and cream livery. Build quality of the shroud is excellent, though some may lament the colour choices and distinct lack of RGB. Perhaps Noctua can be persuaded to build future cards with the chromax.black colour scheme. 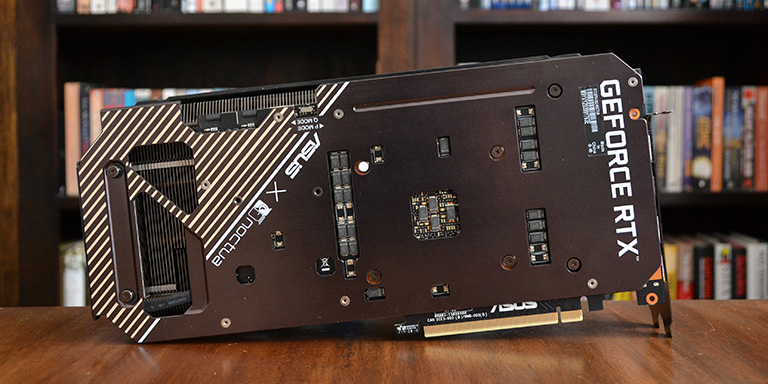 As expected, the two large spinners switch off at loads below 50°C and then ramp up gently through a well-thought-out fan curve. Said 50°C may not sound like a lot, but as you will see later on, such a cut-off actually keeps the card in passive mode for light gaming. Useful.

The rear, meanwhile, is mostly standard TUF. A couple of departures are apparent: it's much larger than the normal backplate and the left-hand side is home to an extra section used as an overhanging brace.

Like TUF, this model is armed with dual BIOSes that flit between Quiet (1,815MHz boost) and Performance (1,845MHz boost). As such, it's considered a mildly-overclocked variant of RTX 3070, though Asus also sells a non-OC model that's ostensibly the same in all other respects. Memory for both is 8GB operating at a standard 14Gbps. 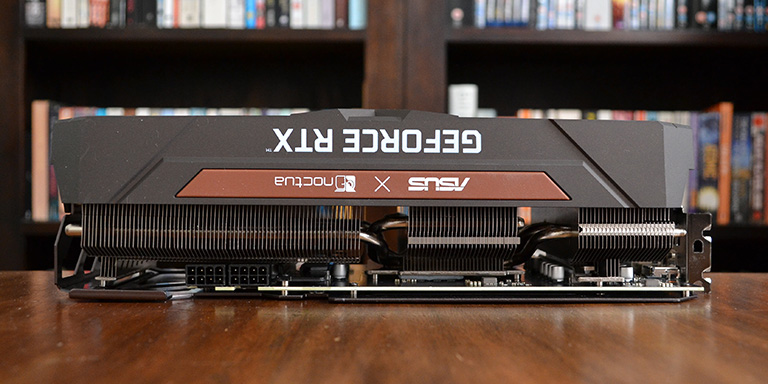 This is the first real indication of the card's size. We don't have a problem with the 4.3-slot profile as the RTX 3070 cannot be run in SLI mode, precluding the use of two cards for gaming purposes. It's debatable whether it needs to be quite as large as this, however, as a well-tuned rival such as the MSI RTX 3070 Suprim X isn't as physically overt yet remains very quiet.

Asus/Noctua takes the normal TUF heatsink, which is certainly no performance slouch, and increases volume and surface area in every meaningful respect. This brute is over 30 per cent taller and 11 per cent wider, for starters. 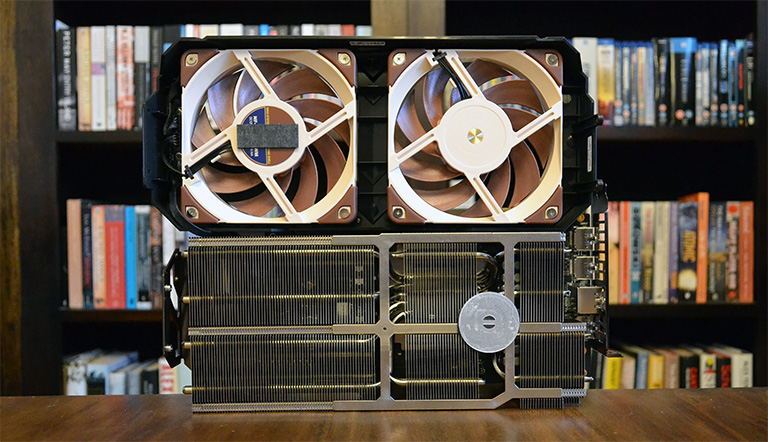 Height emanates from both the heatsink and shroud alone being taller than two slots. Noctua's noise-optimised fans literally sit on top of the full-width heatsink. From a theory point of view one concern we have is with the larger deadspots created by using two 120mm fans instead of, say, three 92mm.

Noctua covers all of the hot-running components by using a single heatsink which splits into three areas, all connected via four heatpipes. Thick thermal tape binds part of the heatsink with the VRMs and memory modules, and while Asus doesn't provide hard-and-fast numbers, this solution ought to make light work of cooling around 240W TGP. 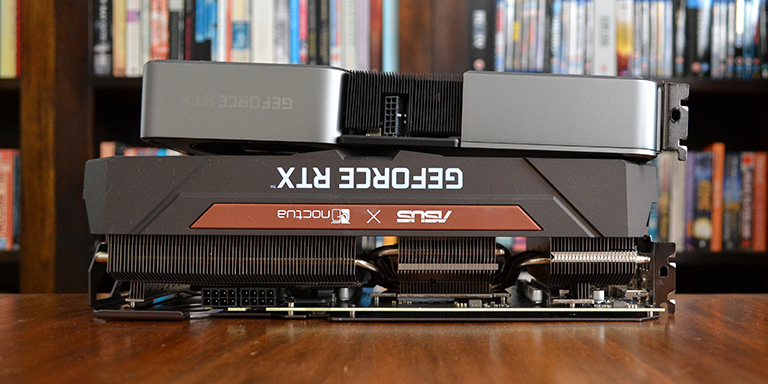 Having an exposed heatsink design does cause a couple of minor issues. Most of the heat removed by the card will be recirculated in the chassis, and subjectively, it doesn't look as clean as a Founders Edition model from either side.

And just to illustrate the hulking nature once more, an RTX 3070 Ti FE is almost comically small when placed directly on top. 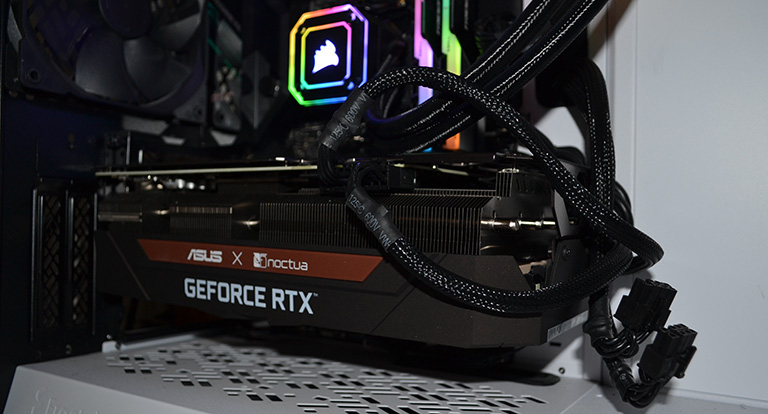 Situated inside a roomy Fractal Design Define 7 Clear Tempered Glass chassis there is little problem with installation. The card's rigidity keeps everything level, whilst on our test system's Asus ROG Crosshair VIII Formula motherboard there's enough room to pull in adequate air from the bottom.

Asus could easily have launched another liquid-cooled RTX card but the decision to go with a massive Noctua actually seems sensible as most enthusiasts run a single GPU and perhaps don't want to use valuable chassis space to mount another radiator on top of, most likely, an existing AIO. 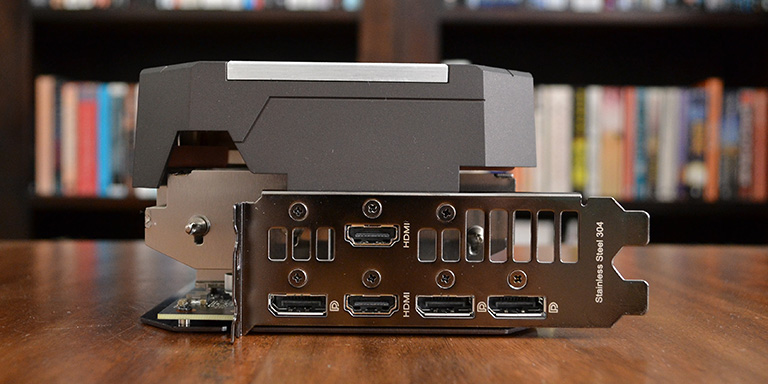 The standard-sized TUF I/O bracket is tiny and appears off-centre. Nevertheless, it's good to see a second HDMI port.

Bear in mind this card is designated LHR, meaning Lite Hash Rate, and a quick benchmark reveals an Ethereum rate of just 25MH/s. There's little reason to buy this for mining.

Asus has set an MSRP of £750. Ongoing stock shortages in general, and the unique nature of this solution in particular, are sure to combine to inflate in-stock retail cost.