Gigabyte has released its new Aorus WaterForce X AiO CPU coolers .These are the successors to the Aorus AiO liquid coolers launched back in September 2019. The new WaterForce series have a lot in common with the previous models. Both are available with your choice of 360mm, 280mm, and 240mm radiators and are resplendent with RGB Fusion 2.0 LEDs on the radiator and a 60mm diameter LCD on the pump block. However, Gigabyte heralds some changes affecting both the core functionality on offer and the ability of the pump display to provide eye-catching animations.

One of the more important changes to the design is probably the upgrade to 7.8mm tubing. Gigabyte says this change "improves the flow by 37 per cent and it is engineered with ceramic axis pump to optimize durability and heat dissipation". Ceramic elements in the water flow system should provide longer life and greater durability than the previous metal components.

Another functional change is provided by the new fans. Gigabyte says its new graphene nano lubricant ball bearing fans are quieter, can move more air, and have a longer expected life span. These 120mm aRGB fans spin at speeds from 700 to 2500rpm.

Last but not least, if you are into RGB and PC customisation, the pump block display on the new WaterForce AiO range has had some upgrades, The size and circular form appear to be the same but there is a more flexible display rotator, and exclusive Chibi Time mode, multilingual custom text, and the ability to display MP4/ GIF/ JPG. Most significantly Gigabyte has now placed a microSD card in the block to "free the creativity of users," which might have been limited by the previous model's built-in storage. 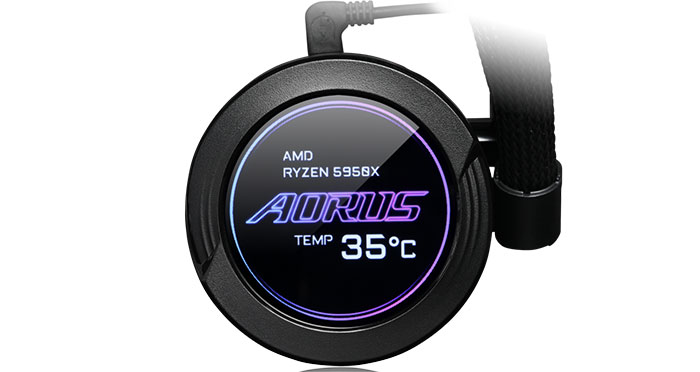 As well as controlling the lighting and LCD the latest RGB Fusion 2.0 software allows users to control CPU model name/clock rates/water, CPU, VRM temps, while Aorus Engine provides a robust control on the heat dissipation of cooler and CPU by instant control on fan RPM/pump RPM.

Gigabyte says it has released these AiO CPU coolers, but I don't have pricing at the time of writing and the product pages are sparsely populated.

Posted by philehidiot - Fri 26 Feb 2021 10:28
SD storage removed from flagship smartphones, given to watercoolers instead.

Seems fine.
Posted by mers - Fri 26 Feb 2021 17:39
Yeah great , can scan your address book on the pump. lol.
Posted by LSG501 - Sat 27 Feb 2021 16:59
eh, what… sd storage… why… isn't there a connection to the pc somewhere like ‘normal’ stuff, hell it looks like it has a micro usb cable in the side in one picture. Why can't it just load straight from the control program on the pc. I could understand it if it was all done on the pump but seems like it needs the control software to read the sd card…