You are here:
Cooling Press-Releases

Hamburg – 30.03.2021 – ENERMAX, a leading designer and manufacturer of high-performance PC hardware, announces the new ETS-F40-FS ARGB and ETS-F40-FS Solid Black tower coolers in Europe. The new models come completely in black and complement the ETS-F40-FS base version already released in 2020. The ARGB version also features addressable RGB LEDs on the fan and top cover. Both models continue to rely on a large 140 mm fan with low speeds to ensure good airflow in silent operation. A suitable mounting system for current AMD and Intel sockets including AM4 and LGA 1200 is of course included in the scope of delivery. 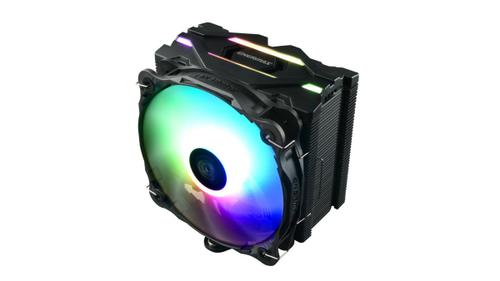 The ENERMAX ETS-F40-FS ARGB and ETS-F40-FS Solid Black offer outstanding cooling performance of up to 200W TDP. Paired with a 140mm silent fan with a maximum noise level of 23dB(A) (optionally with ARGB LEDs), this makes the CPU air coolers the best choice for silent, media and gaming PCs. In particular, the optimised PWM control of the ETS-F40-FS with low starting speed (300 - 1200 rpm) makes no compromise between noise and excellent performance. The four asymmetrical 6 mm heat pipes with Heat Pipe Direct Touch ensure the best RAM compatibility and fast heat transfer. The ARGB fan and top cover deliver stunning rainbow effects in combination with a supported motherboard. The cooler is a must-have for fans of RGB lighting.