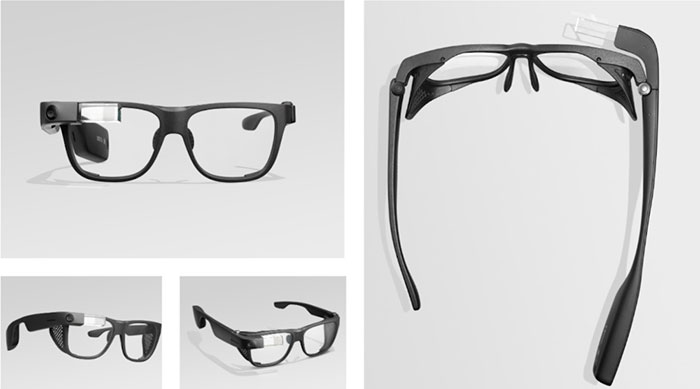 To refine its Glass offering, Google has worked extensively with its big hitter industrial users including the likes of AGCO, Deutsche Post DHL Group, Sutter Health, and H.B. Fuller. People working in these industries can do their jobs more efficiently thanks to the provision of hands-free access to the information and tools they need to complete their work. For example, Glass wearers can "access checklists, view instructions or send inspection photos or videos," which results in faster production times, improved quality and other benefits.

Starting from the outside, Google has partnered with Smith Optics to make Glass-compatible safety frames for different types of demanding work environments, like manufacturing floors and maintenance facilities. You can see the significant design changes in the comparison image above. Glass weighs in at a mere 46g and is water and dust resistant. 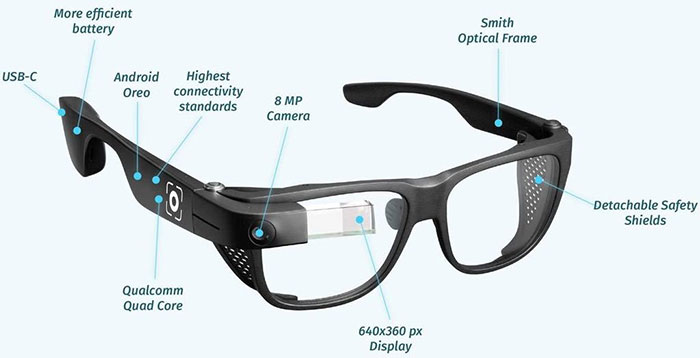 Other important improvements come to the camera. The new camera is an 8MP unit (up from 5MP) with an activity light on the front so people know you are streaming/recording. Three beamforming microphones are installed for clear voice and environment recording. Audio out is via the mono speaker, USB or Bluetooth. Users optionally control Glass features with the touch surface on the right side of the frame. The optical display module has a resolution of 640 x 360 pixels.

Google has installed a USB 2.0 Type-C port for data transfer and fast charging. The installed 820mAh battery can last for eight hours, helped along by the new 7nm SoC. Glass will auto shutdown when it senses you are not wearing it, to save more power.

Last but not least Google Glass Enterprise Edition 2 is said to be easier to develop for and deploy as it is built on Android, so it is easy for customers to integrate services and APIs they might already be familiar with.

An obvious competitor to Google Glass Enterprise Edition 2 in the enterprise space is the significantly bulkier Microsoft HoloLens 2. It costs a lot more but the possibilities it opens up with its mixed reality capabilities makes it rather different, as well as much more expensive at around $3500.

Posted by neonplanet40 - Tue 21 May 2019 11:38
It looks awful…. Will wait to read more. The Hololens would be hard to beat. I think if you are going down the ‘holo’ route, you're best not cheaping out and paying the extra for quality and holo resolution.

neonplanet40
It looks awful…. Will wait to read more. The Hololens would be hard to beat. I think if you are going down the ‘holo’ route, you're best not cheaping out and paying the extra for quality and holo resolution.

A niche for now. But maybe the start of something better to come later.

Could you actually walk around the streets with hololens? I thought that was a tethered devices?
Posted by neonplanet40 - Tue 21 May 2019 12:17
No you couldn't. But likewise, would you WANT to walk around the street with this? That's why I said it is niche. Until it is slim-lined etc. The Hololens is clunky etc but it is meant for a purpose -e.g lectures, teaching, business, design etc etc. It isn't made for walking to your local.
Posted by LSG501 - Tue 21 May 2019 13:37
As someone who wears glasses that looks incredibly uncomfortable to wear for long periods of time…
Posted by [GSV]Trig - Tue 21 May 2019 13:41
As proof of concept and for those geeks with deeper pockets this is pretty impressive kit, but until its a lot smaller and cheaper its not going to be anywhere near mainstream, give it 10-15 years..