Valve and five other PC game publishers have been fined by the European Commission for partitioning the EEA market in violation of EU antitrust rules. The group of companies was accused of entering into agreements to geo-block prices of about 100 games over the last decade or so, denying European consumers the benefits of the EU's Digital Single Market – and the ability to shop around in member states.

"More than 50 per cent of all Europeans play video games. The videogame industry in Europe is thriving and it is now worth over €17 billion," said Executive Vice-President Margrethe Vestager, in charge of competition policy. "Today's sanctions against the 'geo-blocking' practices of Valve and five PC video game publishers serve as a reminder that under EU competition law, companies are prohibited from contractually restricting cross-border sales. Such practices deprive European consumers of the benefits of the EU Digital Single Market and of the opportunity to shop around for the most suitable offer in the EU". 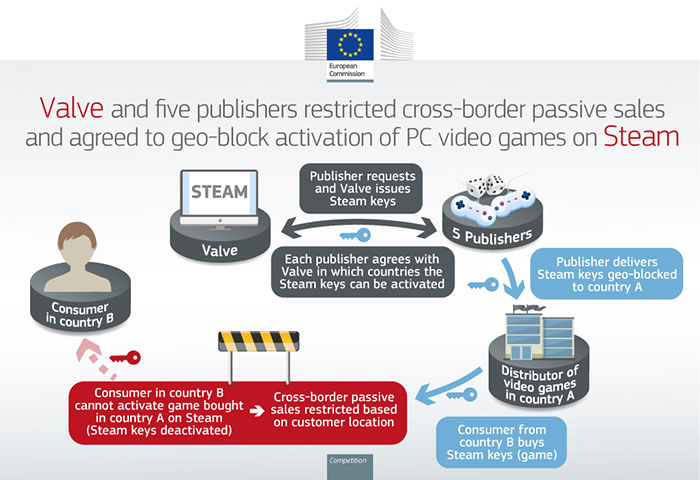 The Commission makes note of the specific action of the five PC video game publishers working with Valve to geo-blocked Steam activation keys bought from the eastern and central EEA market countries. It said some keys were restricted to Czechia, Poland, Hungary, Romania, Slovakia, Estonia, Latvia and Lithuania – obviously as they were cheaper than those available in Western Europe.

In case you are wondering what the EC/EU will do with the fines, it says that "Any person or company affected by anti-competitive behaviour as described in this case may bring the matter before the courts of the Member States and seek damages". A guide has been made available too.

Gentle Viking;4281468
I think EU are fins in its original purpose ( a organization for trade )
What it have evolved into a am firmly against.

and i think that's been the issue with Brexit too. Once you strip away the ignorant “hate foreigners over here” element the key issue has been sovereignty of parliament and the political control. I haven't met a sane person who was against free trade and harmonised standards etc nor ability to work in other countries. The EU made it pretty clear though trade=free movement and the whole EU political harmonisation/centralisation package. It's a shame, but the blame lies on successive governments for not holding the referenda at the times the various treaties were signed. At that point there was possibly time and influence to help shape things in better directions. Equally the original concept always had political integration and harmonisation at its core IIRC so maybe it was just an inevitable clash. Anyway we are where we are and we can watch on the side lines how things go in the EU and how we fare outside of it, (not great is my prediction).

Lols at the moaners in the news grumbling about things taking longer to arrive from Europe and with loads of duties and unpaid taxes they have to front up. HAHAHA what did you think was going to happen? It doesn't say which way they voted, but anyone who says they didn't see that coming is naive.
Posted by Ttaskmaster - Thu 21 Jan 2021 14:38
I'm sure it's not as bad as what Epic are doing, though…..!!
Posted by ilh - Thu 21 Jan 2021 15:58

ik9000
and i think that's been the issue with Brexit too. Once you strip away the ignorant “hate foreigners over here” element the key issue has been sovereignty of parliament and the political control.

The silly thing is that a lot of those people thought that the EU was the cause of ANY foreigners over here and I bet that in the future when we have more immigration from outside the EU as a result of the reduced immigration from inside the EU they will complain all the more and wish instead they had people from the EU who are a lot more similar to us in ideals, history…and of course skin colour.
Equally silly was the whole thing of returning sovereignty but every time anybody tried to get it all done through a vote in parliament (which is actually what sovereignty in this country looks like) they complained that brexiteers were trying to derail it.