Sony launched God of War as a PlayStation 4 exclusive way back in 2018 and has gone on to sell nearly 20 million copies. Now the firm has announced that this popular game is coming to PC, available from 14th January 2022. This is a growing trend we are seeing from Sony, as noted in May when Uncharted 4 and was listed in an investor presentation as joining Horizon Zero Dawn and Days Gone releases 'off console'.

In God of War, you will play as Kratos, via an over the shoulder camera view. You must fight to survive in a world of Norse gods and monsters, and complete a perilous journey with your son. On your way, you will engage in visceral, physical combat. Check out the PC announce trailer, embedded below, for a better understanding of the story.

At release, God of War was heralded by critics as not just a great game, but a "technical and artistic showcase." Now, on PC, it will benefit from enhanced high-fidelity graphics and control customisation options.

The PC version of this game supports true 4K visuals, and ultra-wide 21:9 screens, with unlocked frame rates, higher resolution shadows, improved screen space reflections, enhancements to the ambient occlusion pipeline with GTAO and SSDO on all PC systems (as long as they have sufficient graphical prowess). Additionally, for Nvidia Turing or newer GPU owners, it is possible to take advantage of DLSS and Nvidia Reflex low latency technology.

PC gamers often prefer the keyboard and mouse combination, and these peripherals will be fully customisable with regard to bindings. Meanwhile, for those that wish to kick back with a controller, lots of gamepads will be supported, including the DualShock 4 and DualSense wireless controllers from Sony. 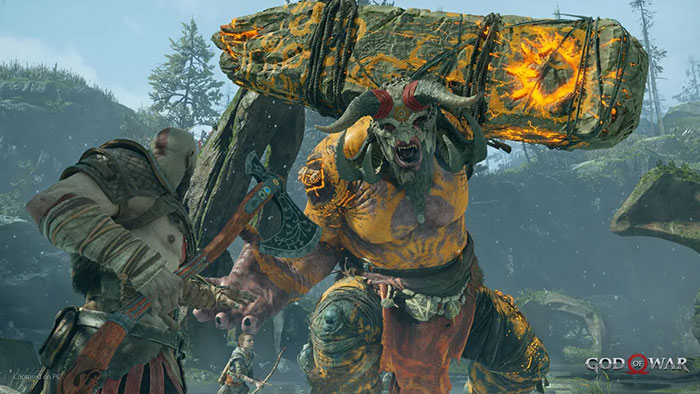 With the purchase of the PC version of God of War, the following content will be bundled: Death’s Vow Armor Sets for Kratos and Atreus, Exile’s Guardian Shield Skin, Buckler of the Forge Shield Skin, Shining Elven Soul Shield Skin, and Dökkenshieldr Shield Skin.

God of War for PC is already up for pre-order on the Epic Games Store and Steam. The pre-order price is £39.99 in the UK. Minimum and recommended PC systems specs aren't available as yet, but it seems that the game will use up 80GB of storage space.

That's what I'm hoping for too.

I've never played any of them, but with how much of a positive reception they seemed to get, I'd be interested in checking them out if the series came to PC.