You are here:
Industry PS4 News

The HEXUS article outlining the early launch successes of Cyberpunk 2077 ended with a footnote about PlayStation 4 and Xbox One users being disappointed by the release. Despite CDPR delays and worker crunch on optimising the title for the multitude of platforms upon which it launched, not enough attention was given to these older consoles. 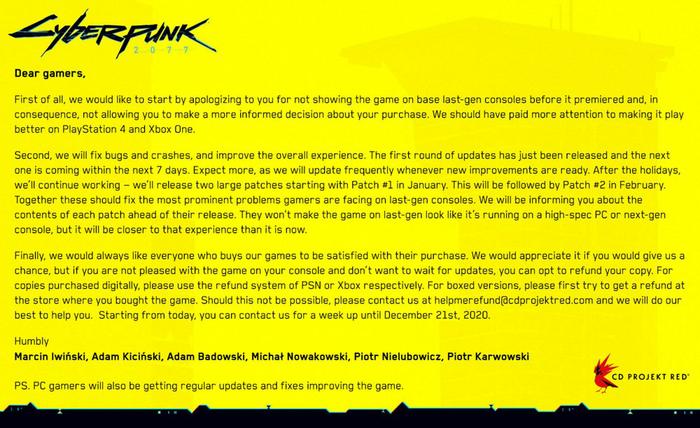 As noted last week some of the videos and stills shared by disgruntled PS4/XBO users were tragic, or laughable, depending whether you intended to play on one of these older machines or not. At the start of the week CDPR openly admitted that "we should have spent more attention making it play better on PlayStation 4 and Xbox One". It went on to promise two large patches to fix things up in the coming months (see statement screenshot above).

A few hours ago Sony went official with a pleasingly clear policy regarding refunds. "SIE strives to ensure a high level of customer satisfaction, therefore we will begin to offer a full refund for all gamers who have purchased Cyberpunk 2077 via PlayStation Store," says a statement on the Sony PlayStation site. "SIE will also be removing Cyberpunk 2077 from PlayStation Store until further notice." Of course there are T&Cs with regard to the refund, so if this issue affects you, and you don't want to wait for CDPR to fix things up, it is best to visit the refunds page and jump through the hoops.

Sony doesn't appear to have any stipulation about which PlayStation you have purchased Cyberpunk 2077 for. As far as I know it isn't such a terrible experience on the likes of the PS4 Pro or new generation PS5 consoles. However, it looks like gamers on these platforms will be free to get refunds if they wish.

Now, many are looking towards Microsoft to see if it will reveal a similar offer for its dissatisfied Xbox gamers. Gamers on PC apparently are the lucky ones with less serious bugs and performance issues in general. If you are on PC and are not happy though, there are still routes to a refund - depending upon how/where you bought the game. If all else fails you can contact CDPR on a dedicated email: helpmerefund@cdprojektred.com before 21st December.

CDPR founders lose over US$1 billion

The above detailed mess isn't without consequence to CDPR of course. GamesIndustry.biz notes that the founders have lost over US$1 billion due to share price impacts from this launch issues / refunds news. Assuming the ship can be steered successfully through the troubled waters it might be a good recovery investment – no advice intended.

CDPR would have had to send builds of the game to Sony for approval and almost certainly Sony would not have allowed them to release it as a PS4 Pro only title.

So its bullcrap that Sony didn't know the game did not run well and are now throwing CDPR under the buss to save themselves.

Also plenty of other PS4 games ran terrible at launch far worse the Cyberpunk,like Ark Survival and even GTA5 ran badly at the start.

The one mistake CDPR made is they didn't show that it doesn't look good or run well on old consoles, if they had done this beforehand it would have defused it and all those looking to crap on the game.
Posted by ik9000 - Fri 18 Dec 2020 13:11
Well I think it's about time game devs were made to release properly finished games and not the beta bugware that too often gets trotted out. Some kind of law requiring beta to be declared as such and limiting the cost accordingly or mandatory refunds where they fail to do so would likely make them sit up.
Posted by LSG501 - Fri 18 Dec 2020 13:31

ik9000
Well I think it's about time game devs were made to release properly finished games and not the beta bugware that too often gets trotted out. Some kind of law requiring beta to be declared as such and limiting the cost accordingly or mandatory refunds where they fail to do so would likely make them sit up.

True but as said above you consoles have ‘validation’ processes to go through before release and so it can't all be blamed on CDPR, having said that the PR from CDPR was saying the delay was for final polish etc and well they failed pretty bad if that's the case too.

It honestly feels like they rushed it out to get the ‘Christmas sales’ based on what I've seen, which is understandable from a financial standpoint but it should have been better finished than it is considering all the delays they've had (can't blame it all on covid imo).. imo they can do their work quite easily from home if they have the right infrastructures in place, if I can do 3D work etc at home, so can the staff at CDPR, even if it meant taking their work pc home.
Posted by philehidiot - Fri 18 Dec 2020 13:41

ik9000
Well I think it's about time game devs were made to release properly finished games and not the beta bugware that too often gets trotted out. Some kind of law requiring beta to be declared as such and limiting the cost accordingly or mandatory refunds where they fail to do so would likely make them sit up.

There is a law in the UK consumer rights act which means if it isn't fit for purpose then a refund is mandated. Blizzard definitely don't obey this law and try and give you “all sales are final” and won't do anything to accommodate you. I can certainly understand “if you've had more than x% of the single player experience, we can not refund unless it's a game killing bug” but with all the DRM and so on, they know exactly how long you have spent playing a game and I'm sure they get telemetry saying what maps, missions, etc you're on. As a result, it would be obvious if a game has been started 20 times but only 3 minutes of actual play time achieved.

My advice is to pay using Paypal or a credit card. Paypal will help you retrieve a refund for a product like this, especially when you can quote the law and multiple emails to customer support. A credit card company in the UK also may be able to help but I've not tested this.

I will not be buying a Blizzard game with DRM in the near future as a result of their stupidity. The rising cost of games means I won't be handing over my money and risking losing it when the game just does not work. You can't release a broken product and fix it with updates. If it's too complex to roll out to all platforms at once, narrow it down and do it right.