Valve is adjusting Steam game download behaviours due to the current Covid-19 pandemic. In a blog post yesterday evening the Steam team announced that it would be making changes to game auto-updating, while reminding users to actively manage their games libraries and update schedules.

Firstly, from Valve's side of the equation, Steam has already been scheduling updates for the next off-peak local time period - for games that haven't been played recently. From this week onwards these downloads will be spread out more thinly. "Only games played within the last 3 days will be updated immediately," says Valve. However, as always, a game will begin updating immediately if you request to play it. Users can still pause and initiate downloads via the Download Manager if they wish.

Secondly, there are various downloading options in the hands of Steam users which Valve would like to remind you about. The main tools at your disposal are the scheduling and bandwidth throttling options in the Download Manager. Considerate users in families or shared homes might already have tuned these settings - avoiding the peak streaming viewing periods in your home, for example.

Some extra options are; to choose to no longer download automatic updates for games in your installed library that you seldom play, or to take advantage of the Library Folders settings to shovel infrequently played games onto colder storage - so if you ever want to play them again they won't incur such large downloads.

A couple of weeks ago, as more and more countries entered Covid-19 lockdowns, HEXUS reported upon Steam breaking its 20 million concurrent player record. Since that time the popular PC gaming portal has gone on to pass 21m, 22m, and 23m. The latest figures show that concurrent users are pushing towards breaking 24m (record is now 23.56m). 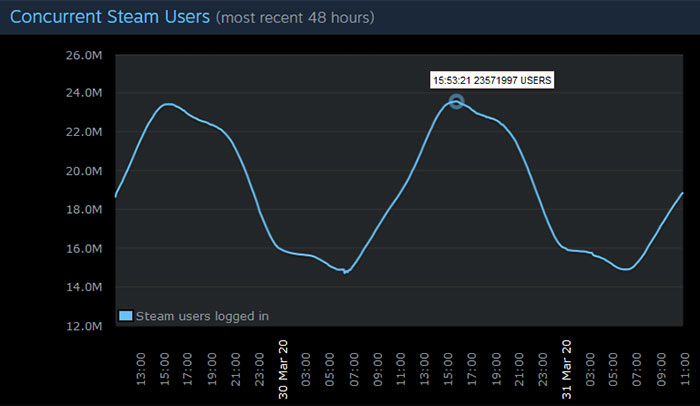 HEXUS also has reported upon streaming services making content bit rate / resolution defaults lower, and gaming services adjusting download speeds. Last week Sony announced it was slowing downloads to conserve bandwidth in Europe, and that blog post announcement has just been amended to include notice that Sony will "take similar measures in the United States".

Posted by AGTDenton - Tue 31 Mar 2020 17:18
Hopefully they can reduce their Steam Client update frequency as well.