Epic Games plans to continue its weekly games giveaways strategy throughout 2020. In what is great news for thrifty PC gamers, it pledged that you can visit the store "every single week, come back to claim your game," and reminded us that claimed games are for keeps. If a strategy is successful, then it is very reasonable to continue it, and free games are just one of the ways that Epic is growing its store and building its reputation.

A snapshot of how the Epic Games Store is performing was provided in a blog post infographic shared by Epic on Tuesday. On the client size of things, yes weekly freebies will continue to be a major attraction. This giveaway activity is probably a major contributor to the "108 million Epic Games Store PC customers" who have registered. 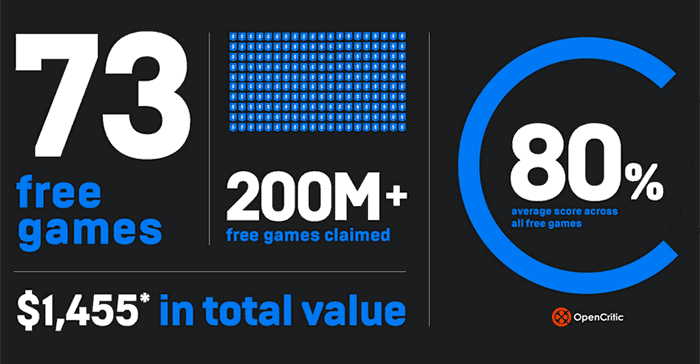 Epic's giveaways have been rather good over 2019 with 73 free games dished out (over 200m claimed) a bundle which would have cost individuals US$1,455, according to Epic. Furthermore, the giveaways have some quality, not just quantity, as the average score across all the free games in 2019 has been 80/100 (OpenCritic data). I admit I have claimed quite a number of them but haven't yet installed the client - I am saving the content for a rainy day with no tech news. 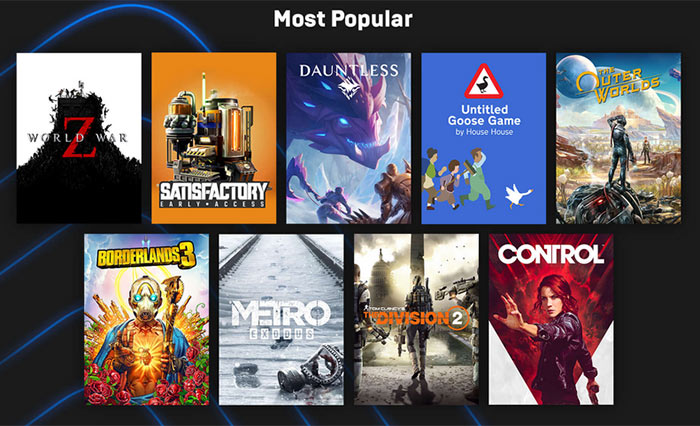 Moving onto actual income from selling games and DLCs, Epic says that 2019 saw $608m spent on its store on games, $251m on DLC and add-ons. Additionally $23m in Epic coupons was spent by gamers. You can see the most popular titles in the graphic above.

Epic will continue using its financial clout to have EGS exclusives and five such games are shown in the graphic above. The exclusives payments are sometimes welcomed by developers as they provide a comfort blanket of a significant payment for a game, ahead of release.

On the developer side of the business, Epic will press ahead with its generous 88 per cent revenue sharing split for developers, it will support developer / publisher payment systems, and it has keyless purchasing integration with Humble (with more PC stores coming soon).

Really looking forward to playing Detroit: Become Human, though… Had a quick play on the demo and immediately had to replay three or four times!!
Posted by Percy1983 - Wed 15 Jan 2020 17:00

Ttaskmaster
I've installed all the free ones I accepted.
Played about half so far, but dilligently not started a new one until I've completed the one I was on.

Really looking forward to playing Detroit: Become Human, though… Had a quick play on the demo and immediately had to replay three or four times!!

I too am happy to support this evil company, some great free games so far and some great purchases I really liked heavy rain which I got on their evil pre order discounts.

I also got beyond 2 souls I am yet to play and have avoided the detroit demo as I am not in a position to play it yet.

Epic is now my most opened launcher out of the 5 installed, keep up the good work and you will break the current monopoly in no time.
Posted by KultiVator - Wed 15 Jan 2020 19:40

Ttaskmaster
But then, I'm morally fine supporting a nasty, evil company that gives away free games, limits the time on their exclusives and gives more money to Devs, so it's all good.

Totally agree… I don't get the bad reaction a lot of gamers have had to Epic, when they're offering a better deal all round than the big sleezy corps that have a long track-record of anti-consumer tendencies (EA, Activision, Ubisoft, <insert more examples here>).