It is doubtful that Nintendo will ever release a Super Mario game with a Battle Royale mode, though one can never really predict the games industry. Meanwhile, YouTuber and modder InfernoPlus has released his own take on what such a chalk-and-cheese mashup might be like. The game is coded in HTML5, runs in your modern browser, and as well as the expected keyboard control you can play it with a joypad type controller.

InfernoPlus introduces his creation with an apology for taking "one of the most beloved classic video games of all time and turned it into a Battle Royale… a true sin". Moving along, and providing some technical background, the YouTuber informs us that "the game is a fully featured recreation of the original NES classic written from the ground up in HTML, and using a Java server backend." The browser game project took three weeks to ready for launch and the author is rather pleased with himself for implementing game controller support, as well as the keyboard (arrow keys direction and space to jump).

If you watch the video you can see that your character will start the game in a pile with 74 others at the start of the 'world', then you and your fellow gamers will head off at full pelt to complete the course first - speed, while not dying or being killed by a racing rival or the environment - survival.

At the time of writing the game is available to play on the http://www.infernoplus.com website. It ran flawlessly in my Firefox installation. However, my attempt at the game was far from flawless, entirely down to my ineptness and inexperience in playing this Mario platformer. As you can see below, the first three to complete the game can sit atop of their particular thrones, if you come in any later you might as well hari-kari in the lava lake provided. 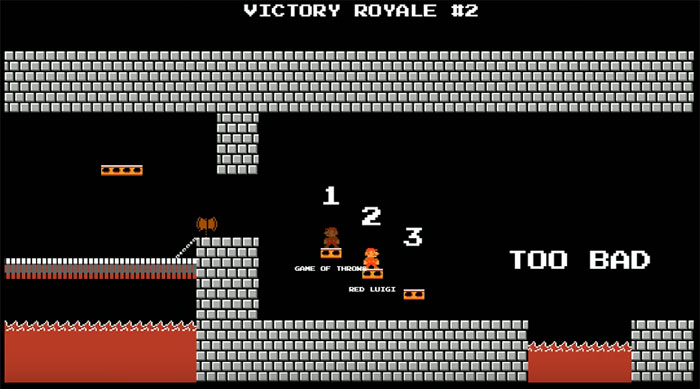 As the game uses (and credits) Nintendo for "all sprites, sfx, and music" it is possible that the game will be pulled due to copyright infringements and/or similar in the not too distant future.

AGTDenton
Ah good something to do at work tomorrow

The guy missed a trick and shouldn't have called it ‘Mario’ anything. Something like Pipe Royale or something would have been better to avoid as much misfortune as possible. Enjoy it while you can