You are here:
Apple Hardware News

There are some very interesting rumours doing the rounds about Apple developing a hybrid games console. According to the grapevine, and stemming initially from Hong Kong-based  sources, Apple is developing a Nintendo Switch-alike console. If such a prospect isn't tantalising enough, the whispers indicate that the console will be based upon a completely new SoC family (not the A- or M- Apple Silicon series) with a high performance GPU which features ray tracing support.

Apple developed a games console way back in the 90s, a famous flop dubbed the Apple Pippin, made with the collaboration of Bandai. After that confrontation with the reality of the games hardware market, Apple seems to have steered clear, and stayed firmly in its lane of content creation for Macs, and consumption / light duty creation for its iDevices. Now perhaps the games market is such a sparkling jewel that Apple cannot help to covet it. Does it need something more than Apple Arcade to do so? If the headlining rumours are correct, then yes. 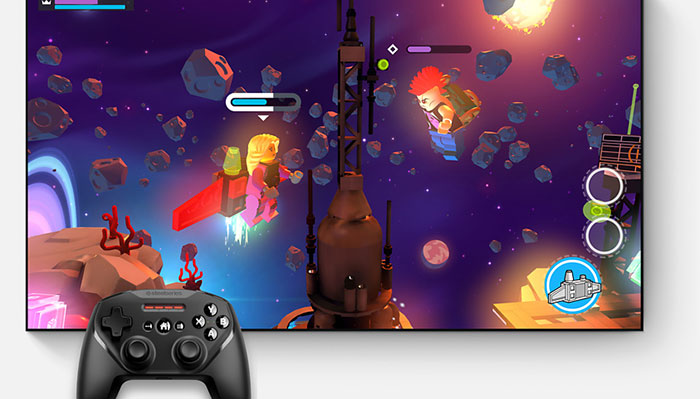 Much more recently there were rumours of an Apple TV on the way that would boast a powerful contemporary SoC, but such a beast hasn't moved from dev testing to mainstream distribution. Another touted project that failed to materialise was the gaming Mac design set for 2020.

The latest rumours suggest that Apple wants to offer something above and beyond the scope of its Arcade offering to break out from the casual gaming mould. One of the key partnerships that will help toward this ambition is claimed to be Ubisoft, a publisher behind many popular AAA PC and console games. The rumours say that Ubisoft is just one of the famous gaming names being courted by Apple.

It is well known that Apple is currently fighting in court with games industry stalwart Epic Games – the company behind the Unreal Engine, Fortnite, and of course the Epic Games Store – a venture it seems to be using to boost game developer revenue share against the interests of the likes of Apple, Google, Valve etc.

Remember to take the above with a pinch of salt. Even if Apple is toying with plans to enter the hybrid console market, and making prototypes, the products might never make it to market.

Posted by LSG501 - Mon 10 May 2021 14:33
Rumours they may be but it would explain why they're so ‘reluctant’ to allow things like xCloud streaming etc onto iOS…

They wouldn't want an established gaming company with lots of games going up against this new ‘console’ (it's likely going to be an m1 based apple tv with controllers) when most of their games will likely be the same iOS games found in arcade.
Posted by tapmybuttons - Mon 10 May 2021 16:23
It has been rumoured for a long time now that Apple has been working on its own cloud gaming service and the latest rumour of a games console seems to be pointing in the right direction

After the disappointing Google Stadia that failed to fulfil all the features mentioned at its initial event, lets hope Apple can do better
Posted by Tabbykatze - Mon 10 May 2021 16:46
And for every element of the console, you'll have to buy adapters and addons for all the things!
Posted by kompukare - Mon 10 May 2021 17:14

Tabbykatze
And for every element of the console, you'll have to buy adapters and addons for all the things!

Maybe Apple going for the ultimate retro arcade console which you have to keep feeding with coins?

It will be released as soon as Apple figure out how to physically siphon coins to their Scrooge McDuck safes (not in Cupertino as they don't want to repatriate their coins to the USA where they'd be forced to pay tax on them).

Seriously, the M1 already has the best GPU performance of any SOC by a large margin, so it will be interesting to see what they manage.
Posted by 3dcandy - Mon 10 May 2021 18:50
No thanks - Raspberry Pi4, recallbox and retropie etc. here cos we only playz themz 80z gamez