As expected, Google has unveiled the new Pixel 4a (5G) and Pixel 5 smartphones and a revamped Chromecast HDMI dongle at its 'Launch Night in' event. Google previously launched the Pixel 4a smartphone (at £/$349) at the start of August and that device is widely available now, and said to be a faster seller than the successful Pixel 3a.

Both the Pixel 4a (5G) and Pixel 5 are 5G phones, with the former including the bracketed 5G in its name only to distinguish it from the previously launched Pixel 4a. Thus one of the big selling points pushed by Google during the Late Night In event was the speedy new connectivity on offer.

It hopes users will benefit from 5G speeds using its data-heavy online services such as YouTube Music, Google Podcasts, or streaming/playing games on Stadia. The lure of 5G is reinforced by the affordability of the new smartphones, reckons Google. 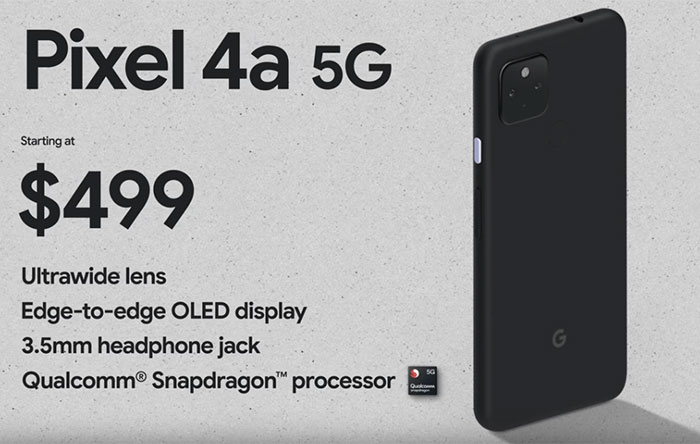 At $/£499 and $699/£599 respectively, the new Pixel 4a (5G) and Pixel 5 are definitely not cheap but this is the new 'affordable' since flagship smartphone prices started to push past $/£1,000 in recent times. The cheaper 4a 5G has a polycarbonate construction to keep costs down but both these smartphones have the same SoC at their heart, the Qualcomm Snapdragon 765G. Of course the SD700 series is a tier down from flagship level but modern smartphones like this won't likely feel slow in use. Moreover this is a 'G' suffixed processor with an overclocked GPU for better gaming.

A differentiator between the Pixel 4a and Pixel 5 is the RAM. The pricier aluminium chassis housed device has 8GB of RAM, compared to the 6GB present in the Pixel 4 and 4a. Both new handsets have pretty strong battery life thanks to the circa 4,000mAh cells they come packing.

A big attraction of the Pixel smartphones is traditionally their camera performance. Many reviewers hold the Pixel line in high esteem and both the Pixel 4a (5G) and Pixel 5 have the same front and rear camera configuration. Both devices feature a dual rear 16MP ultrawide/12MP dual-pixel camera array with an 8MP wide-angle punch-hole camera. Accompanying software introduces users to new Pixel photo features such as HDR+ with bracketing, night sight in portrait and cinematic pan. On the topic of software another heralded feature of these new devices is the 'Hold for Me' AI powered service which can wait in line for you (US only for now). 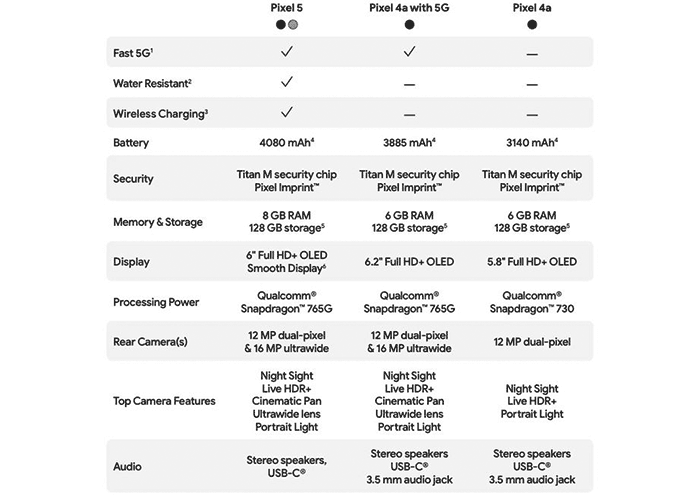 You will be able to buy the new Pixel smartphones from 15th Oct in Australia, Canada, France, Germany, Ireland, Japan, Taiwan, United Kingdom, and the United States. Buyers will get three months of Google One for free.

As well as the phones Google took the wraps off the new Chromecast and a new smart speaker called Nest Audio.

The updated Chromecast comes with a remote, and the hardware is capable of streaming Dolby Vision video in up to 4K HDR at up to 60 frames per second. Instead of being a pretty dumb HDMI streamer the new Chromecast offers users and all-new Google TV entertainment experience, with apps. Last but not least you will get a voice remote with dedicated Google Assistant button, with integration to control Next smart Home devices and check Nest Camera recordings and so on.

Google's new Chromecast is available immediately in the US, priced at $49.99. It will come to Australia, Canada, France, Germany, Ireland, Italy, Spain and the U.K. (£59.99) on 15th Oct but is pre-orderable right away. Here in the UK you can buy the new Chromecast with 6 months (2 screen standard) Netflix for £89.99. 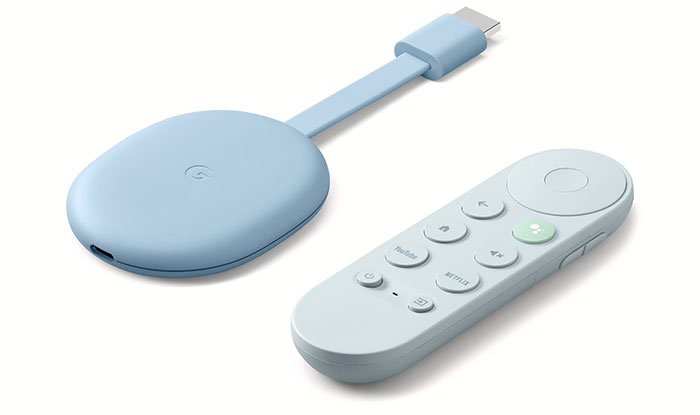 Nest Audio is 75 per cent louder and offers 50 percent stronger bass than the original Google Home. This smart speaker features a 75mm mid-woofer and 19mm tweeter for wide frequency coverage. Google says the Nest team has spent hundreds of hours tuning the EQ of this speaker and it smartly adapts to the material you are listening to via Media EQ.

Nest Audio is available for $99.99 online at the Google Store and other retailers in the U.S., Canada and India starting 5th October. Expect to find it in 21 further countries including the UK (£89.99) from 15th October.

LSG501
If I'm being totally honest, the 5 actually feels overpriced and I see no reason for the 4a 5g (stupid name), I'm not the only thinking the 5 is overpriced from what I've seen either.

Personally I would have liked to have seen the 5 be at the 4a 5g price and there be no 4a 5g….

The 4A 5G is what I've been waiting for. I could never understand why Google allowed its video to be so poor when the stills are so famously good. Now it's got 60fps@4k (hooray, they've caught up with the standards of my 5 year old phone!) and a genuinely new camera (i.e. new hardware and not just artificial software restrictions), so I'm in. Better chip and battery than the recent 4A seals the deal.

I can't decide if I really need to pay 200 above that for a metal back and wireless charging, so I probably won't. But the 4A 5G is definitely 150's-worth above the standard 4A in my opinion.
Posted by Spud1 - Thu 01 Oct 2020 12:47
Words like “flagship” and “cheap” and “value” should not be used for either of these phones, unless you also put the word “not” in front of them…

It just seem crazy they are asking for flagship money (in android terms for “normal” phone sizes) for a phone with such middling specs. Really doesn't make sense. Both are overpriced and under specified. I guess that's largely due to the price of 5G support at the moment, but you'd expect an 865 or 865+ in their “flagship” device, surely.

Google seem to have given up on the Pixel line :(