Microsoft's upcoming Surface Duo has been spotted in the hands of a user riding on public transport. Twitterer Israel Rodriguez shared the photo earlier today in a conversation with Daniel Rubino from Windows Central.

The foldable spotted on Vancouver's SkyTrain looked very much like the Microsoft Surface Duo, as unveiled back in October last year. As a reminder, the Surface Duo is the smaller of the two devices showcased by Microsoft at the special Surface event. As well as the Android-powered pocketable Surface Duo, Microsoft also showcased the larger Surface Neo with twin 9-inch screens and running Windows 10X. 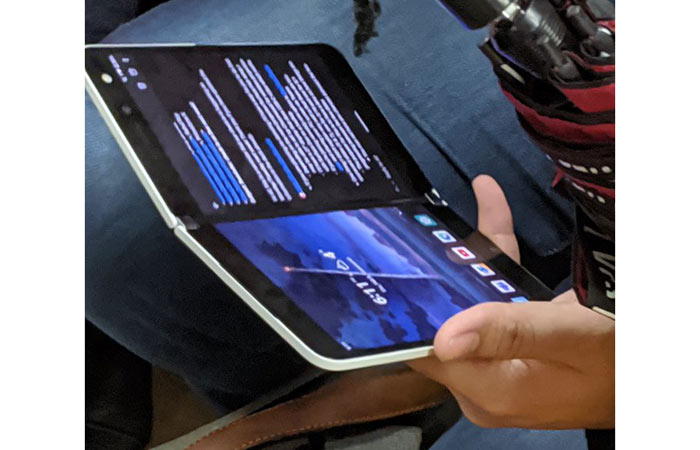 To recap on the Microsoft Surface Duo, as spotted on the SkyTrain, this device is based upon a pair of 5.6-inch displays which can be fully unfolded to create an 8.3-inch tablet. Microsoft doesn't seem ready to back folding screen tech, so can avoid pitfalls which affect that nascent tech, and probably keep costs down quite a bit. Users should enjoy greater reliability, more accessible pricing - but have to put up with a considerable gutter between the screens.

Other things we think we know about the Surface Duo hardware are that it packs a Qualcomm Snapdragon 855 processor, it has a 360 degree hinge, and it doesn't have an external/rear camera. However, the device spotted in Vancouver is slightly different to the one you can see in earlier Microsoft promos, like the video above. The version spotted in public looks like it includes a flash next to the internal camera on the top of the right-hand screen. 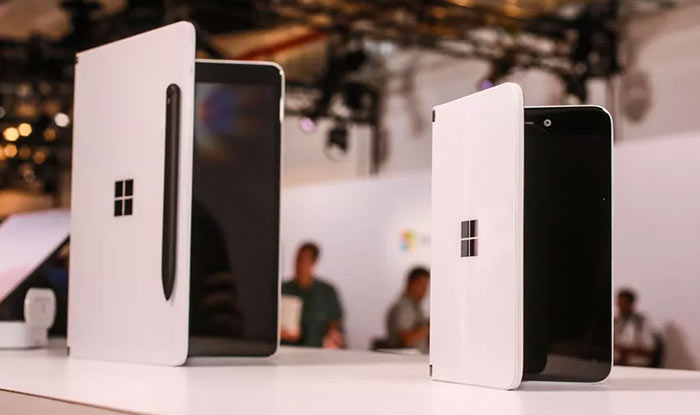 Microsoft says that the Surface Duo will be available to purchase by holiday 2020. A few days ago Microsoft announced its Build 2020 developer conference starting 19th May, so we might get some more information about the Microsoft Surface Duo (Android) and Surface Neo (Windows 10X) at this time.

Posted by Ttaskmaster - Fri 07 Feb 2020 15:21
Staged social media marketing or not, which I suspect it is given the Twitterati source, I still like seeing fun ideas like these.
I miss my old Psion, though…
Posted by daddacool - Fri 07 Feb 2020 16:10
This is the first bit of tech that's had me excited since I got my Insta360 One X. I'll be happy enough if I can use it in landscape with the second screen as a touch keyboard, like the Lenovo Yoga Book. I'll be happier still if MS manage to get enough devs to utilise the second screen properly.
Posted by six_tymes - Sat 08 Feb 2020 00:16
I'm in for one if the reviews are OK.
Posted by iworrall - Sat 08 Feb 2020 10:06

Ttaskmaster
I miss my old Psion, though…

Ask your favourite search engine about “Planet Computers Gemini” - You might be pleasantly surprised!
Posted by deepblue08 - Sun 09 Feb 2020 06:30
The success of Surface Duo depends solely on how well it is received by the developer community. They did a smart move by going the Android route, I have hope.