Microsoft released its latest set of financial results last night, after the stock markets closed in the US. Overall the results were good, and after-market stock prices have responded accordingly (up about 4 per cent). All three of Microsoft's business segments saw revenue uplifts in the reported quarter. However, the weakest performance was in the consumer facing 'More Personal Computing' which only managed a 2 per cent gain in revenue. Under this category Windows, and cloud services did well, Surface revenue was up a little, but dragging the segment down was the Xbox content and services revenue, as per our headline.

The results for the quarter ending 31s December 2019 are dubbed by Microsoft's accountants 'FY20 Q2', in case you might get confused by any quotes and charts in the report. Overall Microsoft revenue was $36.9bn, an increase of 14 per cent, and its net income rose to $11.6bn, an increase of 38 per cent. Let's have a look through the results, segment by segment.

This operating segment brought in $11.8bn, up 17 per cent this quarter. Official highlights are provided in the slide below. 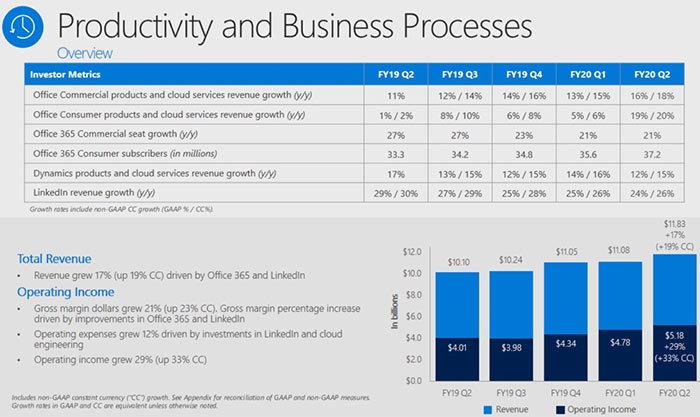 This is a very positive set of results for Microsoft in Productivity and Business Processes. Microsoft says chief revenue drivers were Office 365 and LinkedIn, but you can see gains across all the components of this segment.

Intelligent Cloud revenue was up $11.87bn, up 27 per cent, driven by server products and cloud services. Azure revenue was up an impressive 62 per cent.

Probably the most interesting Microsoft business segment to HEXUS readers, the More Personal Computing segment was positive overall with revenue up by 2 per cent in the quarter. However, the constituent parts of MPC showed highly variable performance. 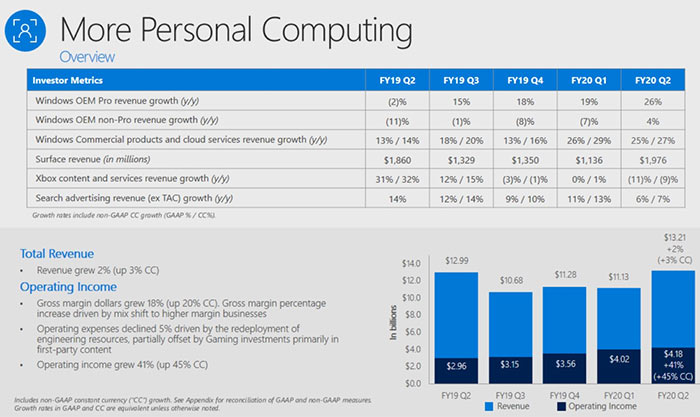 Windows OEM Pro revenue was a bright spot in these results, as was Windows commercial products and cloud service revenue. As you can see above, Xbox content and revenue growth let the side down in a very noticeable way, with revenue down 11 per cent in FY20 Q2. However, this slide was part of a wider gaming revenue decline of 21 per cent, as you can see in the slide below.

Looking ahead in this segment, Surface is expected to continue to grow slowly as Microsoft executes its plan to introduce foldables and other concepts to consumers later in the year. In gaming Microsoft expects low single digit declines to continue for now, until the launch of the Xbox Series X. Talking positively, in a post-results conference call Satya Nadella said that "xCloud is off to a strong start," and that a new record for Xbox Live monthly active users was again set this quarter.

31 Everything we know about the Dyson CoVent ventilator

McKinsey says Covid-19 will be under control in East Asia, and declining in Europe, by then.

From tomorrow only citizens and official residents will be allowed to return to the island.

shaithis
I wonder if their own game pass has just been a way for people to negate a large cost of MS exclusive titles? Sign up for one month, play the game through and then unsub….or wether their is a larger decline in the XBox ecosystem?

Could also be the usual eb and flow when a new console is on the horizon…. most hardcore gamers will be fully aware of a new console ‘coming soon’

Also didn't MS have less releases over the Christmas period than usual?
Posted by KultiVator - Thu 30 Jan 2020 15:13
Take the lower figures with a pinch of salt… COD Modern Warfare 2019 has, reportedly, been the most played online game this whole console generation. Millions of gamer hours have been sucked up by this one title alone, hence the recent record-breaking number of concurrent Xbox gamers online.

The huge success of COD 2019 has been a major factor in denting sales across other gaming titles & subscriptions over recent months (including MS GamePass), as gamers seek to team up with their friends and grind through the addictive online progression system.

If I hadn't pre-paid my GamePass many months ahead, I might well have taken a break from the subscription service myself, to focus just on COD for a spell.

The next generation of consoles will be arriving at an interesting time and with some interesting launch titles after Microsoft's big round of studio acquisitions.
Posted by cheesemp - Fri 31 Jan 2020 14:07
I've switched 99% of my game spending to just game pass (both PC and Xbox One S). Not interested in online - just playing through single player so its a bargain for me - there is always something new I want to play. I also don't feel guilty playing something for an hour and uninstalling. Microsoft are getting far more of my cash than before. Definitely more interested in a next gen xbox than I was.