We sometimes ask our readers to spec a PC base unit at a particular price point. £2,000 represents a really decent amount of money that ought to buy you a high-quality unit that's great for content creation, gaming, and just about everything else. Would you go AMD or Intel for the CPU, AMD or Nvidia for the GPU, and just how would the storage be arranged? Decisions, decisions.

PC Specialist has taken on the two-grand challenge with a base unit that appears to tick many of the requisites. Headlined by a liquid-cooled Ryzen 9 3950X and offering gaming thrills and spills via a GeForce RTX 2080 Super card, let's take a closer look at the Scimitar MK1. 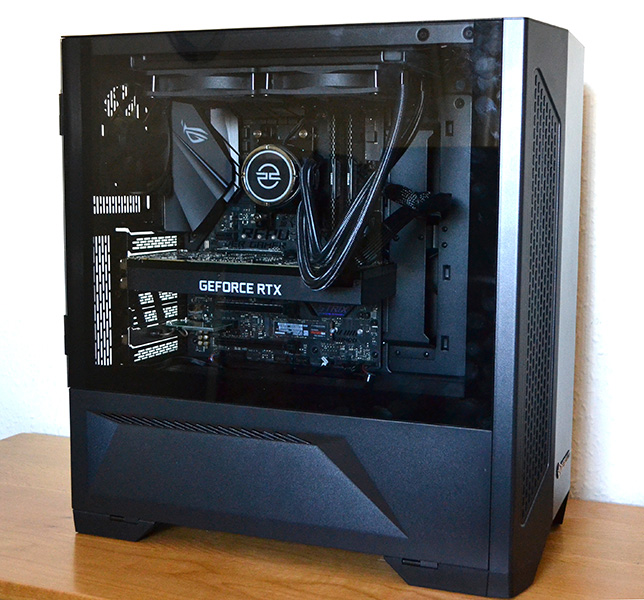 PC Specialist goes for the gamer vibe by using a Lian Li LanCool II chassis that has a number of pros and cons. It's big, solid and features RGB on the front and side that's controlled by a couple of buttons on the front panel. Available in multiple configurations, the Scimitar uses the base model that does without optional front USB Type-C support. That's a bummer for a £2K PC, of course, but making it worse is that the relevant cut-out remains, blocked off by a rubber stopper.

Sleek lines are helped by having a hinged side panel that can only be opened by flipping down the PSU shroud cover, and as you can see, the clear panel is particularly partial to showing up fingerprints. 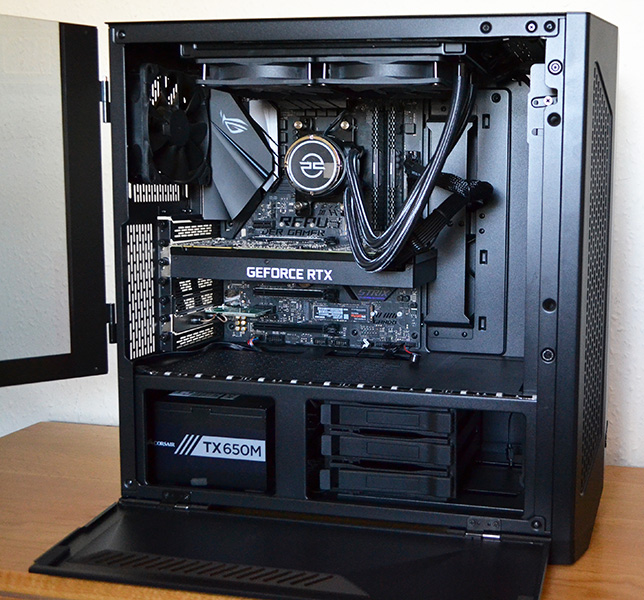 Flipping it open reveals PC Specialist's component choices and handiwork. The non-overclocked Ryzen 9 3950X is kept in check by a company-branded version of ID-Cooling's Frostflow 240mm all-in-one liquid cooler whose fans run at 1,400rpm even when the system is idling. That's too much when there's adequate air ventilation from front to back, and we'd recommend the Scimitar be reprofiled to produce far less noise when doing not very much; you'll see exactly what we mean later on.

The Palit GeForce RTX 2080 Super X matches the 1,815MHz core boost and 15.5Gbps memory of the reference card, though it's without a backplate or what we'd term premium cooling. What's more, for some reason, PC Specialist employs 6+8-pin plugs when the card has two 8-pin connectors. Allocating a retail £1,400 for the CPU and GPU necessitates paring back the specification elsewhere. This is most evident in the motherboard, where the system uses an Asus ROG Strix B450-F Gaming which doesn't support forward-looking PCIe 4.0 available from the CPU.

That's a shame on a few fronts because it precludes baked-in WiFi - PCS gets around this by installing a card in a spare PCIe x1 slot - and the use of the latest, super-fast NVMe drives. Instead, a Samsung 970 Evo Plus 500GB serves as the boot drive, augmented by a 2TB mechanical spinner. Paying attention to detail, we'd prefer if the M.2 drive had a basic heatsink in place. Being a relatively budget offering, the board also misses out on USB 3.2 Gen 2 (10Gbps) and the faster 3.2 Gen 2x2 (20Gbps). We'd argue that allocating an extra £50 overall would bring X570 chipsets into play, complete with PCIe 4.0 and faster USB. 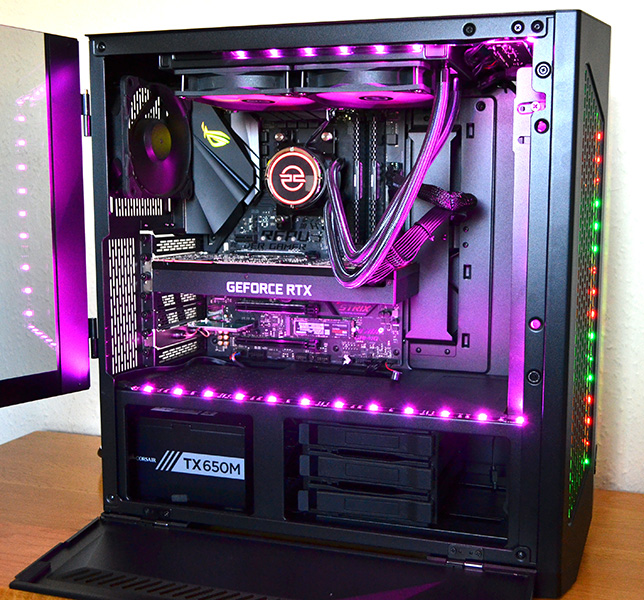 16GB of Corsair Vengeance is the usual go-to solution for a decent build, though do be aware the dual-channel pack operates at a modest 3,000MHz - opting for, say, 3,600MHz costs only a few pounds more, though inevitable stock issues may be the reason why faster memory isn't included.

Cabling is generally tidy thanks to the chassis' compartmentalisation, while the 650W Corsair PSU is more than stout enough for this specification. Bullguard is the only major bloatware on an otherwise streamlined install of Windows 10 home.

Getting the calculator out shows one can purchase these exact components and software for around £2,000, meaning there's no financial benefit of going down the build-it-yourself route, plus you miss out on the three-year warranty - one-month collect-and-return, one-year parts, and three-year labour.