Corsair's relentless release cycle may have slowed due to unforeseen global events, but it is once again picking up pace ahead of a fourth quarter that promises to be jam-packed with gaming hardware. Kicking off a new wave of peripherals, Corsair is today returning to the fore with a flagship keyboard, the K100 RGB.

A price tag of £230 places it firmly in the enthusiast category - the keyboard alone costs almost as much as a next-generation Xbox Series S - but top-end solutions tend not to come cheap, and Corsair reckons its latest "delivers unparalleled performance and features." 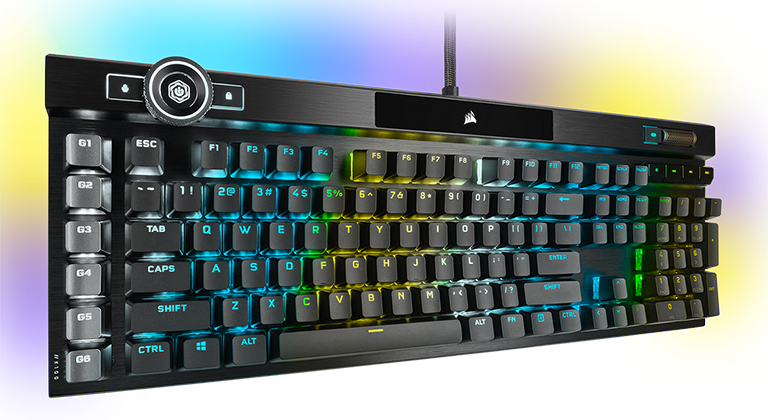 From the outside, the 470mm x 166mm x 38mm K100 RGB is instantly recognisable as a Corsair keyboard, though there are enough tweaks to help the new addition stand out alongside its predecessors. The dial, which we'll come to shortly, is the most obvious change, but there are other, more subtle alterations, too. The classic sails logo at the top, for example, now resides in a translucent cutout that is also home to macro, mute and win-lock indicators to the left, as well as num, caps and scroll lock indicators to the right.

Build quality remains solid throughout with zero flex and PBT (polybutylene terephthalate) double-shot keycaps constructed with 1.5mm-thick walls for extra stability. As you'd expect, RGB lighting plays a key role, and in addition to dynamic per-key illumination, Corsair has LEDs lining the keyboard's top and sides, resulting in a 44-zone configurable 'LightEdge.' Plenty of colour, though it's a shame the keycap font is still pushed to the upper half of the keys to maximise the effect, resulting in 4$€ being squeezed onto the same row on the #4 key of a UK layout.

Elsewhere, Corsair's updated branding sees the company name highlighted vertically down the centre of the palm rest - I find it a tad distracting and would prefer it horizontally in the bottom-right corner - and the product name is tidily etched as //K100 on the bottom-left corner of the brush-effect aluminium top plate. As far as looks go, it's a striking bit of kit and the sort of gear you'd expect to see on the desk of a YouTube influencer.

Let's talk about that wheel, or iCue Control Wheel as Corsair likes to call it. The K100 RGB isn't the first keyboard to add such functionality but Corsair's implementation does work reasonably well. Using iCue as opposed to Windows 10's built-in wheel support, the dial has four preset modes: backlight brightness, media jog, media skip, and macro recording. Each mode is visualised through an assigned backlight colour, and the button at the centre of the wheel is used to switch from one mode to the next. 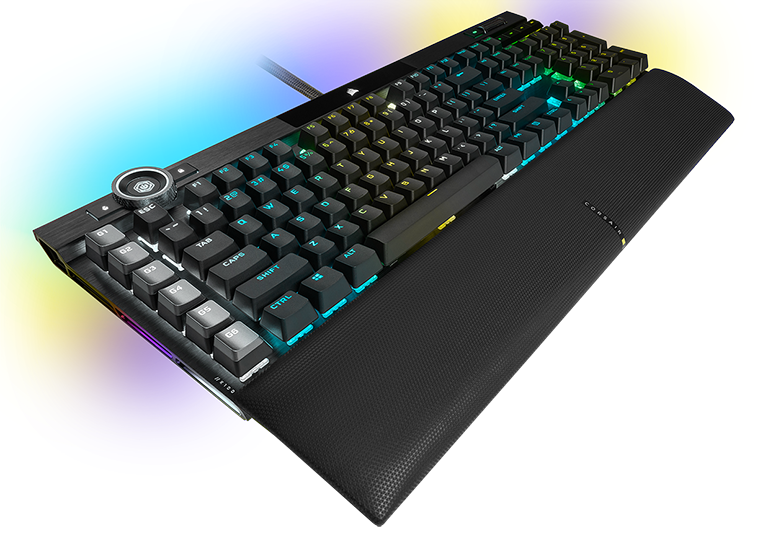 Remembering which colour represents each mode takes a little getting used to - there's a helpful option in iCue to ensure the colour remains active irrespective of other effects - yet once you get to grips with it the wheel does serve a purpose during everyday use. Get over that initial learning curve and there's scope to add additional functions. Four other preset modes include switch application, horizontal scrolling, vertical scrolling and zoom, and users also have the ability to add custom modes that can assign any predefined hardware action to wheel left and wheel right.

Customisation opportunities are plentiful, however the way in which the wheel is physically accessed is somewhat restricted. The wheel isn't pronounced enough to serve as an easy-to-reach knob - low height and close proximity to Esc and F1 make it awkward to turn between thumb and index finger - and as such I've become accustomed to using it as another scroll wheel. The bit that protrudes from the top of the keyboard works well beneath the index finger of my left hand, though it would make sense for the wheel to be located as far into the top-left corner as possible for improved accessibility.

As far as first-gen implementations go, Corsair's wheel is a welcome addition, and it isn't the only bit of upgraded hardware. The keys are using exclusive Corsair OPX optical-mechanical switches that require 45g of force to actuate and use a beam of infrared light to detect keystrokes with zero debounce. Actuation distance is measured at 1mm, from a total of 3.2mm of travel, and we're told to expect a lifespan of 150-million keypresses.

Add to that Axon Hyper-processing technology, a 'purpose-engineered real-time operating system' running on the keyboard's underlying SoC. Optimised to react quickly and more efficiently, Axon paves the way for a 4,000Hz polling rate (a 4x increase over current Corsair keyboards) while managing 20 layers of hardware lighting effects saved to the 8MB of onboard memory.

We're not attuned enough to notice the difference between 1,000Hz and 4,000Hz when actually gaming, but that doesn't change the fact that this is Corsair's most capable keyboard hardware to date, and all of the usual value-adds are present. A column of half-a-dozen grey-tipped G-Keys line the keyboard's left side for quick access to any recorded macros, there are contoured, textured and grey-tipped keys included in the bundle for FPS and MOBA layouts, and dedicated media keys haven't been forsaken at the expense of the wheel - they're still located above the numpad, directly below the volume scroller and mute key. 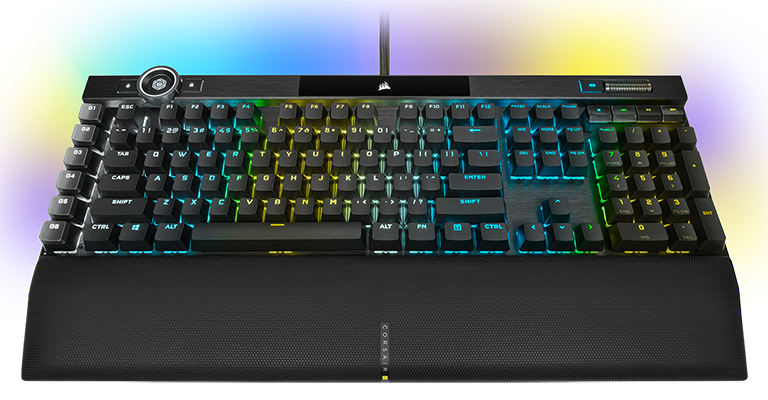 Plenty to appreciate, yet even at this price point there are a couple of niggles. The K100 RGB still occupies two USB 3.0 Type-A ports on the host PC via a split 6ft braided cable, and the passthrough port on the keyboard itself remains rooted to the older USB 2.0 standard. Corsair tells us that in order to meet faster USB 3.2 requirements, the connecting cable would need to be noticeably thicker, less flexible and shorter in length. The firm's internal feedback from consumers suggests that these negatives would outweigh the benefits, but we're curious to hear your thoughts; would you prefer a USB 3.2 port on the keyboard at the expense of a shorter, thicker cable?

Moving on, we aren't completely sold on the bundled full-length palm rest, which attaches to the keyboard using a pair of magnets. The memory-foam cushion is admittedly luxurious, but with the keyboard raised on its back feet, the palm rest doesn't sit flush to the surface and wobbles noisily during use. The combination works best with the keyboard laid flat, and while we're nitpicking, it's a shame the mute, profile and windows lock keys are low-profile with a greatly reduced travel distance compared to every other key.

What's handy is that Corsair has ensured that a good number of K100 RGB features are available without having to install any additional software. Users can cycle through predefined lighting effects using shortcuts from FN+1 through to FN+0, and even macros can be recorded on-the-fly by holding the wheel key until the macro indicator begins flashing. Of course, if you do want maximum customisation, you'll need to install Corsair's iCue utility, and possibly Elgato Stream Deck, too.