We're spoilt for choice when it comes to peripherals here at HEXUS HQ, so the fact that I use Corsair's Ironclaw RGB as my preferred gaming mouse is testament to the quality of the device. Launched back in January as a go-to solution for righties with large hands, the mouse isn't particularly fancy - it's wired and features just the seven buttons - but it's sculpted profile makes it one of the comfiest gaming peripherals I've used.

I didn't anticipate retiring the device anytime soon, but here we are just five months later, and Corsair has a superior sibling dubbed the Corsair Ironclaw RGB Wireless. The name alone reveals that wireless connectivity is the big change, but there are a couple of other significant upgrades that could also be of interest, so let's dig in. 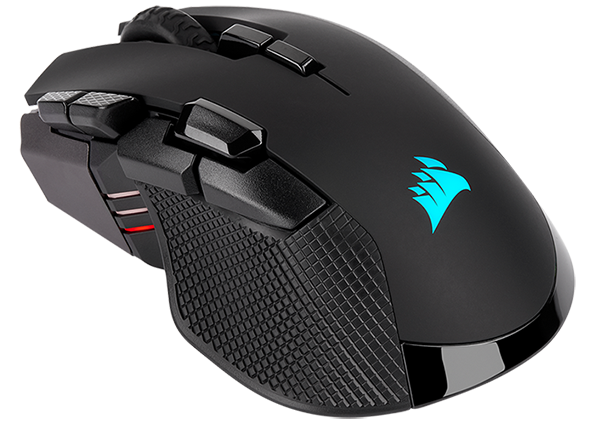 First and foremost, there's an inevitable price premium attached to the wireless mouse, but the £70 price tag isn't as bad as we'd feared. A modest £16 increase over the regular mouse isn't off-putting, and in a crowded marketplace, the Ironclaw RGB Wireless is one of the most competitive wire-free solutions in its class.

Knowing better than to meddle with a winning formula, Corsair hasn't altered the overall shape, which is great news for those who favour a slightly larger mouse. Dimensions come in at 130mm x 80mm x 45mm, and the form factor is in my estimation close to perfect for right handers with long digits who prefer a palm-style grip. Textured sections on both sides provide good grip, though for the wireless model the rubberised portion on the right has shrunken in size; it's still comfy for your pinky, while giving the ring finger a little more freedom.

A more obvious change revolves around the buttons, which have grown in number from seven to 10. I'm of the opinion that too many buttons can make a gaming mouse feel cluttered, so I'm pleased to find that Corsair's additions enhance the overall experience while maintaining comfort levels. All three extra buttons are located to the left side of the main Omron-backed clickers; two nearer the front; plus a third sandwiched between the forward and back thumb buttons. The third button had me fearing accidental clicks and unwanted friction, but it's positioning is spot on, and the forward and back buttons have also grown in size, making them easier to activate during the action.

Top marks for layout, but do be aware that the default assignments are a little different to the norm. The buttons behind the scroll wheel now switch between profiles, while the two new buttons nearest the index finger have taken over DPI duties. I'm still divided when it comes to the clickable scroll wheel - the notched mechanism is good but the textured finish feels overly coarse - and the LED indicators on the left side, while still useful, now have to juggle a multitude of signals. The three lights are used to indicate charge status, DPI stage, profile selection and wireless connectivity status. Making sense of the multi-coloured blinks takes some getting used to, but just about everything is easily customisable through software.

Another unexpected change is the implementation of a third lighting zone at the front of the mouse. This extra bit of glow augments the backlit scroll wheel and Corsair logo, but we're a tad surprised to see more illumination on the wireless model, as having the LEDs enabled takes a hit on battery life. According to Corsair, you can expect up to 16 hours of use when connected via 2.4GHz wireless with standard lighting. Disabling the illumination extends battery life to 24 hours, and if you switch to Bluetooth, the best-case-scenario for longevity is 50 hours of usage from a single charge. A full recharge takes roughly two hours using the supplied 1.8m braided USB cable, but do note that the built-in 850mAh lithium-polymer battery is non-removable, meaning no way to protect against degradation further down the line.

The key talking point, of course, is the availability of three modes of connectivity; wired, 2.4GHz wireless and Bluetooth 4.2. Corsair's implementation of 2.4GHz WiFi, dubbed Slipstream, promises a range of up to 33ft and a sub-1ms point-to-point latency via the small bundled dongle. It's fast enough for us not to be able to tell the difference between wired and wireless modes, and the availability of Bluetooth is handy for hassle-free migration from, say, your gaming rig to your work laptop, where higher latency (>7.5ms) is less of an issue.

Alternating between 2.4GHz and Bluetooth is as easy as flicking the switch on the underside of the mouse, where you'll also find the same customised version of PixArt's PMW3391 optical sensor as the existing Ironclaw RGB. Supporting DPI adjustment from 100 to 18,000, the sensor ships with three stages pre-configured to 800, 1,500 and 3,000, and users can customise sensitivity in 1 DPI increments. Precision is excellent, and while gaming we've struggled to identify any flaws with the sensor.

Everything points to a good mouse made better, however there is a downside we've yet to discuss. As you'd expect, the addition of a built-in battery, more lighting and three extra buttons has had a knock-on effect on weight, which climbs from 105g for the Ironclaw RGB to a rather hefty 130g for the Ironclaw RGB Wireless. It hasn't escaped our attention that we identified the wired mouse as being a little too light, and we're now nitpicking to the extreme by labelling the wireless variant as heavy. 120g would perhaps be the sweet spot, but if you like your mouse to feel particularly nimble, Corsair's wired model remains the safer bet.