Nvidia came out swinging with the Ampere bat by launching a trio of RTX 30-series graphics cards recently. We took a good look at the underlying architecture and the RTX 3080 Founders Edition in the launch-day review. It was no secret that whist handsome in the benchmark stakes and based on the performance GA102 die, it wasn't the fastest gaming Ampere around. That honour fell to the GeForce RTX 3090. Let's take a closer look at the behemoth in table form.

You may recall that the GA102 die is a silicon monster. Comprised of 28.3 billion transistors with a 628.3mm² footprint and built on Samsung 8nm process, it carries 84 streaming multiprocessors (SMs) that each contain 128 Cuda-capable cores. That's 10,752 shaders all told, but like previous generations, Nvidia leaves a little wiggle room for its top-tier regular card. The RTX 3090 uses 82 out of those 84, offering 10,496 shaders, 328 Tensor cores and texture units, 112 ROPs, 82 RT cores, and a 384-bit memory bus connecting to GDDR6X operating at 19.5Gbps. The absolute full-fat GA102 is likely to be the as-yet-unannounced Titan model, left in the wings in case AMD's upcoming 'Big Navi' is better than expected.

RTX 3090 is certainly no poorer cousin of probable Titan, mind, as a 1,695MHz boost frequency combines to offer over 35TFLOPs of compute and almost 1TB/s of memory bandwidth. Those numbers compare favourably to the RTX 3080 by offering 19.5 percent and 23.2 percent more on those two metrics, respectively, but what really sets the RTX 3090 apart is its 24GB framebuffer.

Let's be clear. Having 2.4x the onboard memory pool - the same as RTX Titan from the 20-series - doesn't readily help in gaming as titles are tuned to use 11GB and below. Rather, Nvidia advances the same argument for RTX 3090 as Titan; the massive framebuffer is useful in rendering applications that make liberal use of large datasets within card memory, rather than spooling them out to much slower system RAM and hampering time to completion. Applications such as OctaneRender, AutoDesk, Blender, and DaVinci Resolve are put forward for the RTX 3090/Titan argument. Gamers, on the other hand, are beguiled by the promise of being able to play in 8K60 through adoption of this silicon might and DLSS technology, though such monitors are rarer than retail RTX cards right now. 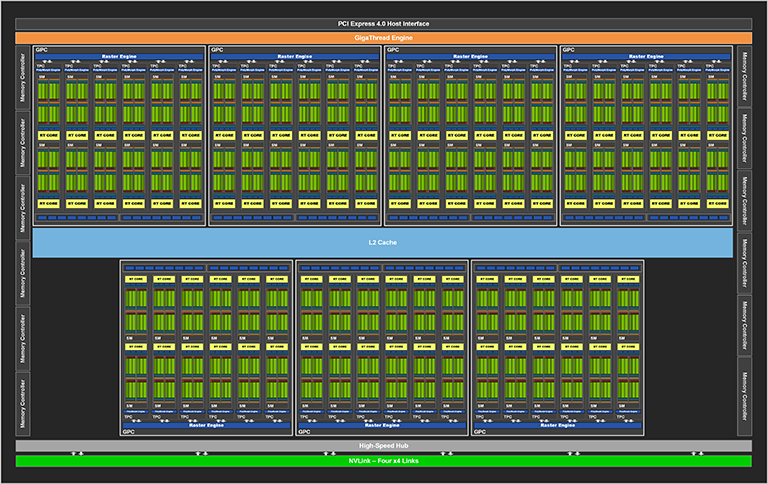 Oh, and in case you missed it, unlike the other two Ampere cards, RTX 3090 can also be teamed with another board for SLI usage through third-generation 112GB/s NVLink connector present on every board. Sounds good on paper, but we reckon the experience will be poor given the lack of resources games developers are investing in multi-GPU optimisations.

Having more of everything that matters pushes the power consumption out to 350W, up from the RTX 3080's 320W. That's no biggie, and Nvidia recommends a 750W PSU as a minimum. Going faster on the core, memory and providing 2.4x the footprint escalates price to $1,499. That's a 114 percent increase of the '80. Nvidia is acutely aware of two things: that those who hanker for the absolute best will pay for it, and stock is sure to be so limited that demand far, far outstrips supply. Nvidia could probably charge double and still sell what we expect to be a meagre allocation.

Nvidia is taking the same tack as all recent launches. There's a good-looking Founders Edition plumbed with the specifications reported in the table above, and a host of partner cards from the likes of Gigabyte, MSI and Asus using a reference board design paired with company-specific coolers that purport improved thermals and acoustics.

With that in mind, we're investigating the Gigabyte GeForce RTX 3090 Gaming OC's credentials.