Intel understands that it needs to do more in the mainstream CPU space following AMD's impressive Ryzen revival. The smaller company typically offers more cores and threads for the same outlay, but it also has the high-end enthusiast space covered with the Ryzen Threadripper goliaths.

And the situation is arguably more difficult for Intel because it has suffered from a lack of supply over the last year. It's only now that most Core models are readily available, so it's worth looking at what's happening in the volume end of the market - sub-£200 - and evaluate which company offers the best overall bang for buck. 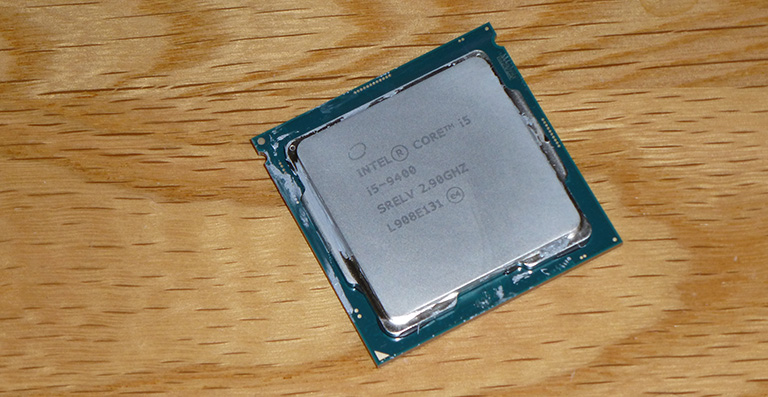 To this end, Intel released a number of 9th Gen core processors in January, supplementing the champion 9900K from October 2018. Today, we're taking a closer look at the Core i5-9400.

Before we give this chip a dollop of analysis, it's interesting to see that Intel also has a number of IGP-less processors that are, for all other intents and purposes, identical to the standard models featuring UHD 630 graphics. They're priced identically, too, at least in quantities of a thousand units, and ship with identical TDPs, so we wonder why any enthusiast would go for them and miss out on potential goodness of Quick Sync Video and inherent ability to run in a system without a dedicated graphics card.

The best guess is that these F-suffixed processors are aimed at system integrators who always ship their base units with a dedicated video card in place. We'd also imagine the buy-in pricing to be lower than 'normal' parts, helping SIs hit agreeable price points that compete well with AMD Ryzen systems.

Intel's Core i5-9400, meanwhile, does very little on the spec. sheet to differentiate itself from the last-gen 8400. Both are based on the third-generation 14nm++ process, share the same IGP and memory capability, cost the same, though there's a very minor increase in frequency. In fact, it could easily be classed as the Core i5-8450 and no-one would be the wiser.

It's a shame that Intel has moved the needle so little in the 15 months between generations, at least as far as the Core i5 family is concerned, though we do note that AMD's latest Ryzens also keep the same core/thread topology as their predecessors. At least AMD jumps to a smaller manufacturing process, hikes the supported memory speed and adds about 10 per cent more performance.

Speaking of the competition, AMD offers twice as many threads as Intel, which ought to leave the Core i5 in the proverbial dust in heavily multi-threaded benchmarks. The real question is how AMD fares in light-load and gaming tests. If the Ryzen pair gets close, recommending the Core i5 will become naturally difficult.

Let's jump to the benchmarks and find out.