Fractal Design's Define 7 chassis is well liked here at HEXUS HQ - it went on to serve as the foundation for our 2020 test platforms - but the enclosure's silence-optimised profile isn't for everyone. Concerns were raised about a potential lack of airflow, and if you favour low temperatures above all else, you may have elected to wait it out for the inevitable Meshify makeover.

That case, dubbed Meshify 2, arrives today priced from £120 and gives the polished Define 7 foundation an airflow injection that enthusiasts have been clamouring for.

The signature angular mesh frontage synonymous with the Meshify line makes a return, and it's as divisive as ever. Some love the modern design, while others find it odd. I quite like it, though I do still prefer the understated elegance of Define 7's solid front door. Still, Meshify 2 is going to deliver improved cooling performance, and if you're a fan of the front panel, you'll be pleased to learn that Fractal has taken the time to refine its latest implementation.

That angular front fascia now sits on a hinge, allowing it to be pulled open for quick access to the front fan rails. Better still, the full-height nylon filter inserted behind the front cover is easily removable should you really want to maximise airflow, and the top I/O ports are mounted directly to the chassis, meaning the entire front panel can be pulled away with no wiring to contend with. Speaking of I/O, the central power button is flanked by audio jacks and USB 3.1 Gen 2 Type-C on the left, plus reset and two USB 3.1 Gen 1 Type-A on the right. A decent selection, though that's two fewer USB ports than the Define 7, and if you're choosing between the mid-tower models, note that Meshify 2 isn't lined with sound-dampening material on its front or side panels.

Looking beyond the exterior alterations, it is for the most part the same underlying chassis that we know and appreciate. We'd encourage readers to revisit our Define 7 review as both chassis have a lot in common, but as a quick recap the dual-layout interior has room for up to a 285mm E-ATX motherboard and can be configured either for lots of cooling or lots of storage. For the former, there's ample space at the front of the case for a reservoir and radiator - two removable inlays at the end of the PSU shroud offer good flexibility - and if you're planning a server-type build, the plate to the side of the motherboard tray can be moved forward to allow for a further nine 2.5/3.5in drives via optional trays.

Whichever layout you choose, there's a long list of helpful touches that elevate the user experience. The top cover, top filter and cooling bracket, for example, are all removable, providing excellent access to the interior during the build process, the side panels are bottom-hinged and easily removable by pulling the top-rear tab, and an integrated Nexus+ 2 fan hub can manage a trio of PWM and half-a-dozen three-pin fans from a single motherboard header. 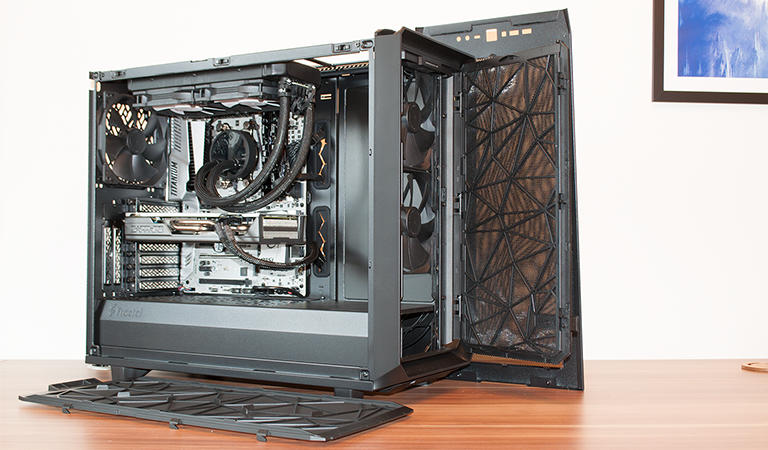 Dimensions of 542mm x 240mm x 474mm are a smidgen shorter than the Define 7, yet as you'd expect, Meshify 2 is equally capable when it comes to component support. A CPU cooler can measure up to 185mm in height, graphics cards can extend up to 467mm, there's an option to mount the GPU vertically via a riser kit (sold separately), and three 140mm Dynamic X2 fans are included as standard.

Choose to expand on the default setup and you'll find nine fan mounts in total, three 120/140s up front, three 120/140s in the roof, two 120/140s on the bottom, and a 120/140 at the rear. Enough for either a 420 radiator up top or 360 in front, and there are decent storage provisions, too. You get two dedicated 2.5in sleds fixed to the rear of the motherboard tray, two 3.5in trays in a removable cage at the end of the shrouded PSU compartment, four bundled 3.5in trays for use in the aforementioned storage layout, and a bundled multibracket, which can convert any unused fan position to an HDD, SSD, pump or reservoir mount. You don't, however, get a 5.25in optical bay, which we suppose is to be expected given the airflow-optimised frontage. 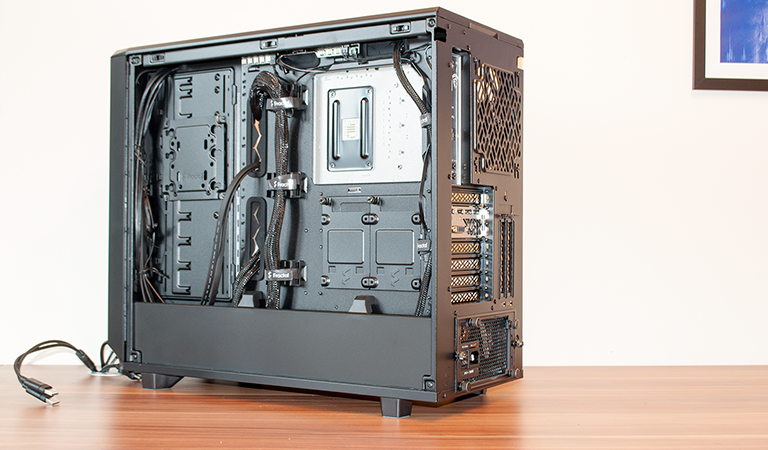 We've built into our fair share of cases, and Fractal's current framework is about as good as it gets. Cable management is excellent with 30mm of clearance around back, an included cover to hide any excess in the PSU section, and Velcro ties in all the right places. There's also no RGB lighting, which while disappointing to some readers, will serve as music to the ears of those who favour reduced cable clutter.

Meshify 2 is essentially the excellent Define 7 re-styled with an emphasis on airflow, and in keeping with the original, there are multiple colour choices available at launch. A basic all-black model with no glass side panel fetches £120, while windowed models are priced at £129 and come in black, grey or white, with either dark or light-tinted glass. Let's now see how much of a difference the Meshification makes to real-world performance.