Which is the best mid-tower chassis on the market today? Depends what exactly you're looking for, but as an overall package, we're inclined to give the nod to Fractal Design's Define 7. Such was our appreciation of the case that we chose to use it as the foundation of our 2020 Test Platforms. We have no regrets; swapping components on a frequent basis is a breeze, build quality is top-notch and it is genuinely satisfying to work with.

Define 7 is our go-to enclosure for a high-quality build, but those who favour a more compact rig may have guessed that a smaller model would be on the way. The Swedish firm has a history of introducing petite variants of existing cases and is today continuing that trend with the aptly-titled Define 7 Compact. 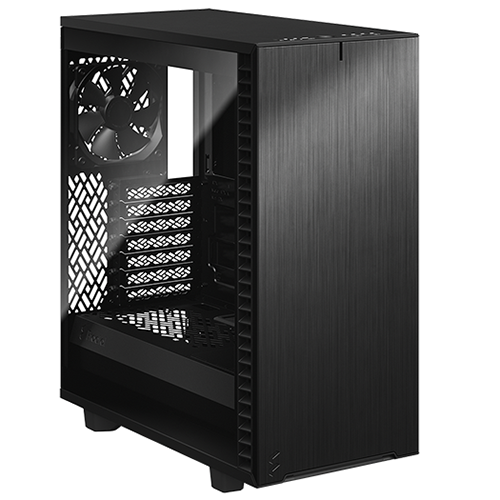 A smaller frame sounds ideal for those who have space concerns or don't need the large interior of the regular model, but cutting back on size does result in the jettison of certain features. We expected the Compact to come with a couple of trade-offs, but it turns out there's more missing from the spec sheet than anticipated. The number of drive mounts has been cut in half from eight to four, there's no 5.25in optical bay, available fan mounts drop from nine to seven, there's no integrated fan hub, and the ability to vertically mount a graphics card has also fallen by the wayside.

Given the condensed feature-set, pricing needs to be attractive and Fractal starts the D7 Compact at £97 for a base model with a solid side panel, or £107 when equipped with either a light or dark tempered glass panel. That's a 30 per cent saving, and though hardened enthusiasts may still be inclined to go for the fully-fledged model, we reckon there's plenty of interest in smaller builds. Will your next PC employ lots of hard disks, an optical drive or a vertical GPU? If not, the D7 Compact will free up space, and the £43 saved could be invested elsewhere.

You might also argue the smaller frame will look sleeker - the regular D7 can look somewhat vacant without elaborate liquid cooling - and the good news is that build quality is comparable between the two. The steel frame is suitably rigid, the side panels retain the quick-release, top-latching and bottom-hinged design that we've grown to love, and the front I/O panel goes untouched. That means a large central power button flanked by a pair of audio jacks, reset, two USB 2.0, two USB 3.0 and a USB 3.1 Gen 2 Type-C.

And it's not as though the D7 Compact can't handle a high-spec rig. On the contrary, there's room for either a Mini-, Micro- or regular ATX motherboard, your power supply can measure up to 165mm in length (250mm without hard disks), graphics cards can extend up to 341mm and CPU cooler height tops out at 169mm. Drive support, meanwhile, is spread across a two-bay 2.5/3.5in cage at the end of the PSU bay, and a pair of 2.5 SSD sleds fixed to the rear of the motherboard tray. The former can be removed entirely, while the latter can be relocated to the top of the PSU shroud.

Fan mounts are in decent supply, too. Fractal offers three 120s or two 140s in the front, two 120/140s in the roof, a 120 at the rear and, with the drive cage taken out, a 120 at the bottom. In terms of radiator support, this arrangement allows for up to a 240 rad up top, and thanks to removable inlays at the end of the PSU shroud, either a 240, 280 or 360 in the front. Plenty of upgrade potential, but only two Dynamic X2 three-pin fans are supplied as standard, a 120mm rear exhaust and a 140mm front intake. 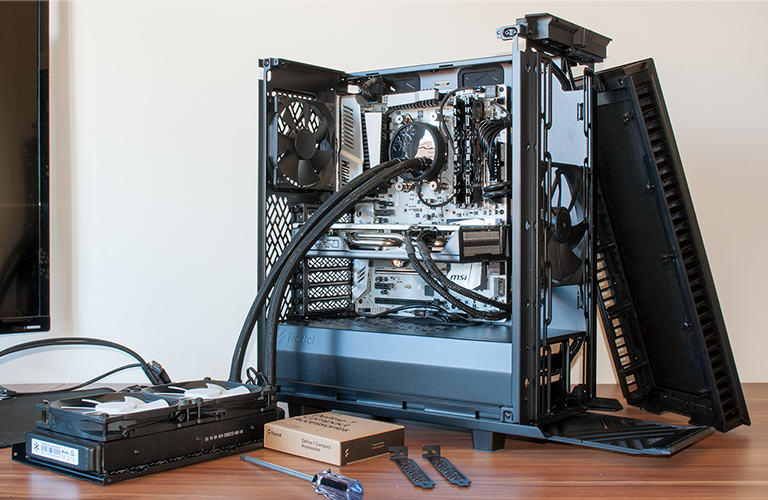 Working with the case is almost as enjoyable as its regular-sized counterpart, and that is thanks in part to the excellent open-top design. The radiator tray, mesh dust filter, and steel top cover all come away with ease, providing a level of access that proves beneficial during the build process. Those up-and-over cables are certainly simplified, and the extra touches available to the regular D7 are present here. The solid top, front and side panels are each lined with sound-damping bitumen, there's good filtering throughout, and the bundle includes an interchangeable ventilated top cover if you need the airflow.

Why only almost as enjoyable? Well, while the Compact does plenty in a smaller profile, we personally favour the extra breathing room of the dearer Define 7. There's less clearance for cable management around back, meaning you have to be extra tidy to ensure the quick-release side panel doesn't pop off on its own accord, and you do notice the constraints in specific areas. The cable holes in the top of the PSU shroud, for example, are partly obscured with the supply in situ, forcing us to route the HD audio cable the long way around. 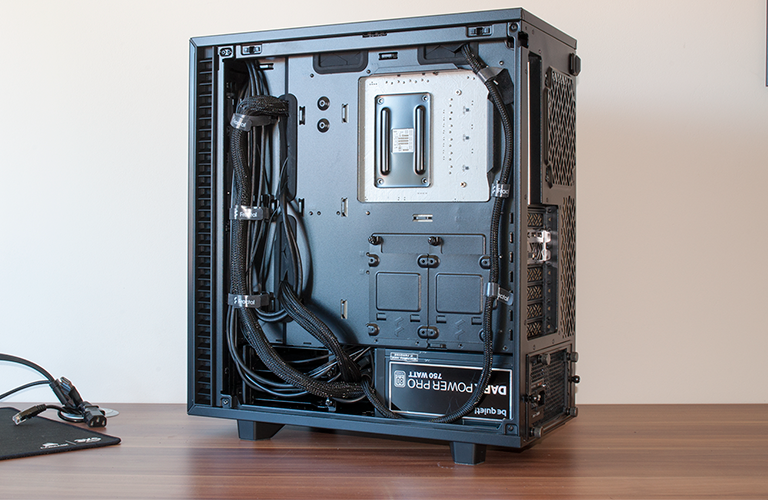 There are still plenty of Velcro ties to help keep things tidy, and we like the fact that the Define Series continues to prioritise sleek aesthetics and low-noise operation. You won't find any gaudy RGB lights here, though nitpicking somewhat, it's a shame the Compact doesn't come in any colour other than black; the white interior available to the regular Define 7 really works well, and we hope that colour scheme is brought over at a later date.

A smaller model inevitably isn't as all-singing, all-dancing as the regular Define 7, but this is nonetheless Fractal's most-capable Compact ATX chassis to date, and a meaningful upgrade over the 2016 Define C. Let's run the benchmarks before coming to a conclusion.