We've tested a lot of chassis here at HEXUS HQ in the past few years, and while plenty are deemed decent enough, those that truly impress have been few and far between. In the mid-tower space, the be-quiet! Dark Base 700 was the last chassis to win our Editor's Choice award, and that was almost two years ago.

There's certainly no shortage of choice, but with the arrival of RGB lighting and eye-catching glass, there's a sense that many of the well-known players are sacrificing overall quality in favour of aesthetics. Fortunately, if you prefer a case that's solid, well-thought-out and designed to last, we've unearthed another gem in the form of the Fractal Design Define 7. 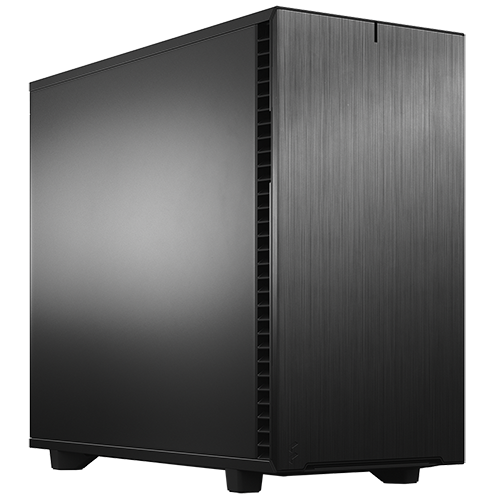 The Define Series has been a favourite for many years, yet recent iterations have felt somewhat tired, and Fractal needed to be bolder in bringing the chassis up to date. Flashy variants such as the Vector RS and Define S2 Vision were a sideward step, and Define 7, priced from £145, has turned out to be the case we really wanted.

Get it out of the box and first impressions are positive, with the reassuring 13.5kg weight helping convey the feel of a premium product. With others employing thinner materials in order to cut cost, it is satisfying to find the Define 7 is solid throughout; even the steel back panel - a soft spot for many cases - is rigid with no obvious sign of flex.

Build quality is excellent and we appreciate that Fractal has gone about its visual refresh in a tactful way. 7 is instantly recognisable as a Define Series product, yet there are important tweaks that make it look like a 2020 solution. The I/O panel, for example, is no longer installed in a plastic inset, and instead sits flush with the smooth top panel. Better yet, it is outfitted with a large power button, a pair of audio jacks, reset, two USB 2.0, two USB 3.0 and a USB 3.1 Gen 2 Type-C. Five front-facing USB ports is nice to see, and the upright power LED that became a bit of an eyesore on older Fractal enclosures is now set back deeper behind the door, making it less distracting.

Remember the somewhat cumbersome ModuVents on the top of previous Define Series chassis? They're all gone, as the sleek top panel now comes off in its entirety - more on that later. These changes give Define 7 a streamlined outlook, and the front door, topped with a brushed sheet of aluminium and finished with a classy Fractal logo in the bottom corner, now uses a magnetic latch and floating hinge for smoother operation. As you'd expect, door orientation can easily be swapped from right to left, and the front, top and side panels are all lined with sound-dampening material.

I quite like the understated aesthetic of our all-black review sample, but as before, there are plenty of variants for those seeking a little more flair. Fractal will be introducing models with either a light or dark tempered glass side panel, priced at £155, and you'll have a range of colours to choose from, too, including grey, white, and black with a white interior. We've yet to see the two-tone colour scheme in the flesh, but the pictures sure do look good.

Define 7 does a good job of modernisation on the outside, and it's when you start to work with the chassis that you realise the interior is every bit as good, if not better. Getting inside is effortless thanks to top-latching and bottom-hinged side panels that pop out with a gentle tug of the grips on the back, and whatever sort of build you're planning, we're confident in stating that Define 7 is almost certain to have you covered.

Dimensions of 547mm x 240mm x 475mm make it a somewhat long enclosure, but that space is what makes the dual-layout design possible. In the standard 'open' layout (pictured), you get maximum room for cooling paraphernalia, but if you're leaning more toward a server-type build, the plate to the left of the motherboard tray can be moved forward into a 'storage' layout.

Who still uses hard disks, might you ask? That's a good question, and if you no longer see yourself using many 2.5in or 3.5in drives, you may well prefer to free up space on the desk with a shorter case. On the other hand, it's nice to always have the option, and Define 7 offers storage possibilities that few other mid-tower chassis can match.

In its default layout, the case can accommodate two 3.5in drives in the metal cage near the end of the PSU compartment, two 2.5in SSDs on the removable trays behind the motherboard panel, and either a 2.5/3.5in drive on the bundled 'multi-bracket' that can fix to the back of the storage column or convert any unused fan position to a pump or reservoir mount.

Need more? Switch to storage layout and you can make room for up to 19 storage devices (15 x 3.5in and 4 x 2.5in), though you will need to buy additional trays/brackets to make it happen. Half-a-dozen 3.5in trays are included in the bundle, and in case you were wondering, there is a 5.25in optical bay, too, which now has its very own dust filter when not in use.