It's hard to go wrong with a Fractal Design chassis. Build quality tends to be good, the feature-set is usually comprehensive, and their dependability is built around the fact that you know what you're going to get. A commendable formula, but the core of what's good about a Fractal enclosure doesn't cater to builders who crave wow factor, and when we reviewed the Define S2 back in October, we came away feeling as though the firm's signature aesthetic was starting to show its age.

We needn't have worried as the plan was always to introduce a jazzier variant that takes the Define S2 foundation and adorns it with more glass and, of course, lots of colourful lighting. Enter the Define S2 Vision RGB, launching today priced at the princely sum of £225.

That price tag ringing alarm bells? It did for us too, particularly when you consider that the Define S2 upon which the Vision is built was readily available for £99.99 during the Easter sales. Choosing the trendier sibling is a very pricey prospect, but PC component manufacturers evidently understand that consumers are willing to spend over the odds for all things RGB, and it has to be said, the Define S2 Vision is rather lush at first glance.

Expanding on the single tempered glass panel of its predecessor, this 2019 upgrade adds glass to the front and top, as well as to the rear side panel, to complete the overall aesthetic. It is a very modern look, and the quality of the glass feels excellent while the dark tint gives the case a mysterious vibe that contrasts perfectly with the RGB accents. The one caveat is that the front section housing the I/O ports and side vents remains plastic; we appreciate Fractal wanting to keep familiarity between cases, but at this price point we'd have preferred an all-metal build.

Still, the purpose of the Vision RGB is to be Fractal's most eye-catching chassis to date, and it certainly accomplishes that. What's handy is that there's also a 'Blackout' variant for those who love glass but can't abide RGB lighting. This alternative model swaps the four 140mm Prisma AL-14 PWM ARGB fans in favour of non-backlit Dynamic X2 GP-14 PWMs, jettisons the other RGB accessories, and lowers the entry fee to a more palatable £185.

We'd encourage readers to revisit our evaluation of the Define S2 to learn more about the chassis' core layout, but given the premium, there has to be more to the Vision RGB than colourful fans. Dig deeper and you do begin to notice some useful upgrades. Firstly, the number of bundled fans has increased from three to four, and the front mounting rails are now neatly hidden behind the GP-14s, giving the trio of 140mm intakes an almost floating aesthetic that looks rather smart. There are also removable mesh filters lining the side intakes, but while we expect performance to be good, Vision RGB's frontage clearly favours form over function; you wouldn't line a chassis with glass if airflow is your primary concern.

Turns out Fractal Design understands this predicament as there are bundled provisions for improving airflow. By default, the top glass panel, lined with a Prisma ARGB LED strip, looks particularly swish but offers zero ventilation. Those wanting to install a radiator in the roof of the case will want to swap the glass lid for the optional cooling bracket that's included in the box. This supports three 120/140 fans and includes a fill port, but the plastic top vent doesn't look as good as the luxurious glass.

Interestingly, the tweaked mounting rails at the front mean that a 420mm radiator can no longer fit in the roof. Hardly a deal-breaker, mind, as the S2 Vision RGB can still house a 360/280 in the front, a 360/280 in the roof, as well as a 240/140 at the bottom. And if you are intent on an elaborate cooling loop, the tweaked PSU shroud now includes mounting points and tubing pass-through holes for a reservoir or a bottom-mounted radiator. 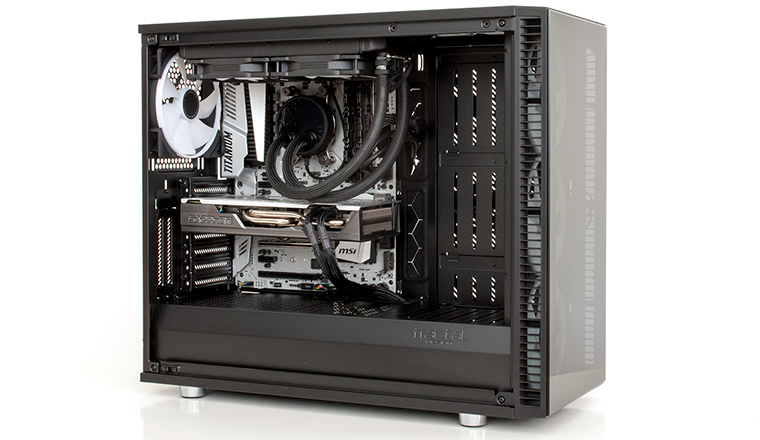 The changes don't stop there. Fractal's integrated fan hub has been upgraded to a Nexus 9P that supports up to nine PWM fans (the older Nexus+ allowed half-a-dozen three-pin fans plus a trio of four-pin) and, in case your motherboard lacks dedicated RGB headers, a SATA-powered Adjust R1 RGB Controller is at hand to cycle between lighting modes and effects.

Plenty to appreciate, yet is it enough to justify the £225 fee? We're not so sure, particularly while the regular Define S2 can be had for under £100. Price is ultimately the major sticking point, but if you're willing to splash the cash, the Vision RGB is Fractal's most fashionable enclosure, and it retains a highly versatile layout that handles a modern high-end build with minimal fuss.

The 543mm x 233mm x 465 mm frame supports up to an E-ATX motherboard, a 7+2 expansion slot arrangement allows for a vertical graphics card (albeit via an optional riser), and storage opportunities are plentiful thanks to five metal trays behind the motherboard; three for mechanical disks, two for SSDs. The 2.5in trays can be relocated to the top of the PSU shroud if you prefer, and though we don't imagine many users will make use of all three 3.5in trays in this day and age, they're nonetheless useful for hiding excess cable clutter. 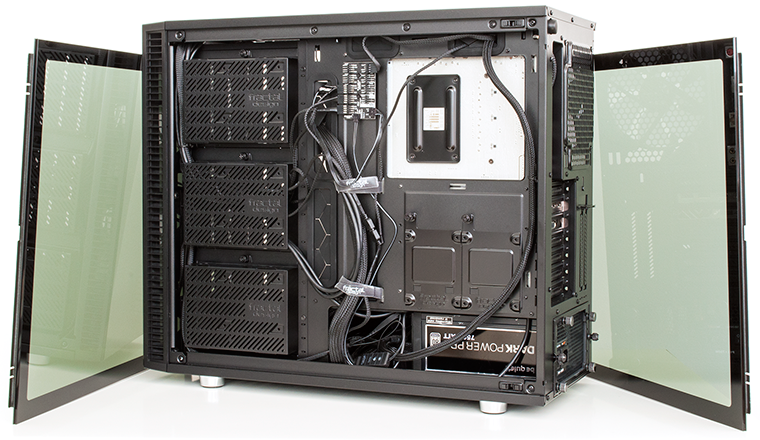 Fractal gets most of the upgrades right, however there are a few shortcomings that have carried across. The cable for the front Type-C connector is still frustratingly short, and the quick-release button for the top panel doesn't like the glass all too much; it seems the windowed panel is too heavy to be lifted up by the mechanism, so you may need to help it on its way by reaching into the case.

As you'd expect given the Define S2 underpinnings, this is inevitably an enjoyable enclosure to work with. There are rubber-grommeted cable holes in all the right places, we love how the seamless side panels pop into place - you don't technically need to install the thumb screws on the back if you don't want to - and the bottom of the case is lined with a full-length pull-out filter. Cable management could get tricky due to the RGB fans, but Fractal helpfully includes a splitter that can be used to daisy-chain all four fans, and the LED strip, to a single header. It takes little effort to create a very sleek-looking build, but let's now see if performance is up to scratch.