Deepcool may have started dabbling in the premium end of the PC component market, but what we love most about the Chinese manufacturer is its ability to offer mid-range products at bargain prices; the £29 Lucifer CPU cooler from 2014 instantly springs to mind.

Fast forward to today and the firm still has a growing catalogue of budget-friendly solutions, including Matrexx Series chassis that have a nifty habit of aligning product names with the MSRP. Last year's Matrexx 55 offered most of the essentials for £55, and the 2019 Matrexx 70 promises a little more finesse for, you guessed it, £70.

The chassis is expected to arrive at UK stores sometime around the middle of May, and while other enclosures in the Deepcool range are intent on adding as many features as possible, Matrexx 70 is stripping things back for the sake of "simplification and liberation." Sounds like your usual marketing fluff, but we can sort of see where the manufacturer is coming from. We imagine a lot of builders prefer to choose their own component configurations, so why bother bundling lots of fans, RGB lights and associated controllers? Matrexx 70 ships with only one fan (a rear exhaust) and there's no RGB lighting to speak of.

Keeping things basic puts an even greater emphasis on the chassis' quality, and at the £70 price point we reckon that Deepcool gets most of the essentials right. It's a sleek-looking piece of kit, and the all-black steel frame complements the tinted tempered glass accents rather nicely. Considering the price, there also happens to be a fair amount of glass. Matrexx 70 ships with large glass panels on both the front and component side, and there's a third surprise addition in the form of a glass top to the PSU shroud. This removable element doesn't enhance functionality in any way, but it's something we've not seen before, and it looks trendier than we'd expected, particularly when component lighting reflects on it, giving the interior a more expansive feel.

We're satisfied with overall build quality and the 475mm (L) x 228mm (W) x 492mm (H) mid-tower frame has ample scope for a high-end rig. Motherboard support ranges from Mini-ITX right the way to E-ATX (there are plenty of cable holes to cater for the latter), and there's decent storage accommodation in the form of a dual-bay hard-disk cage at the end of the PSU compartment and four dedicated SSD mounts. Two of these are at the front of the case, alongside the motherboard where 2.5in drives can be shown off, and the remaining two take the form of removable sleds attached behind the motherboard tray.

Matrexx 70's specification is decent, and as you might imagine, there's plenty of thought given to third-party cooling. Both the front and top of the chassis can accommodate up to three 120/140mm fans, making it easy to slot in a couple of extra-large radiators, and the top mounts are offset to minimise interference with motherboard components. The case can be made to sparkle when outfitted with elaborate coolers and lots of RGB fans - Deepcool's own build video shows it off to good effect - however while we like the do-it-yourself approach, there are a few areas in which Matrexx 70's foundations could be improved. 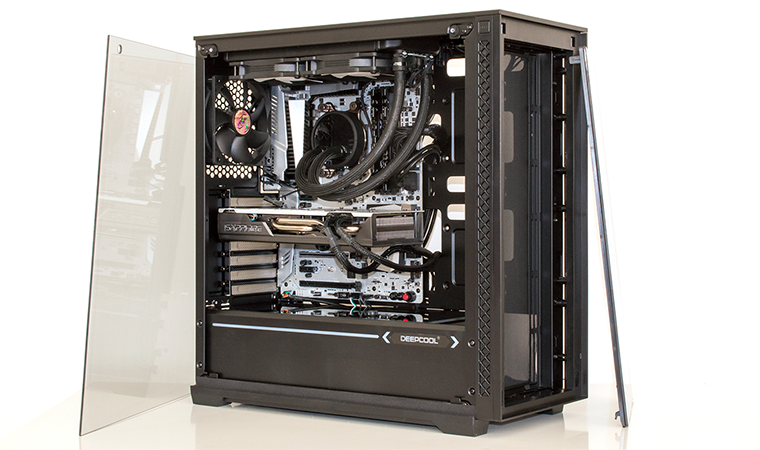 Firstly, the bundled rear exhaust is a basic 120mm blower powered by either a three-pin header or Molex. Secondly, there are no rubber grommets on the cable-routing holes, which is always a downer when you're trying to keep things ultra tidy. And thirdly, the front dust filter is cheap and fiddly. The top of the chassis is lined with a magnetic mesh cover, while the bottom features a full-length pull-out filter, but up front it's a thin sheet of mesh that is held in place by 10 tabs that are cumbersome to put in place. We'd have a preferred a rigid filter on the front, too, though in truth, given that the glass front limits airflow to the slim mesh-lined vents on the sides, we reckon end users could do away with the front filter without losing too much sleep.

While we're nit-picking, we're also not entirely sure about the transparent Deepcool branding across the side of the PSU shroud. The idea is to put an RGB strip behind it, but Matrexx 70 doesn't come equipped with the strip as standard, and if users choose not to add one, it looks somewhat odd having transparent branding that's intended to be backlit... but isn't. Speaking of illumination, while the chassis is dark for the most part, the I/O ports are surprisingly bright. Lining the top-right side of the chassis, the selection includes a large power button, two USB 3.0, one USB 2.0, audio and microphone jacks, plus a reset button. Nothing out of the ordinary, however the blue backlight is more vivid than we'd like, and can be distracting depending on how close you sit to the chassis. 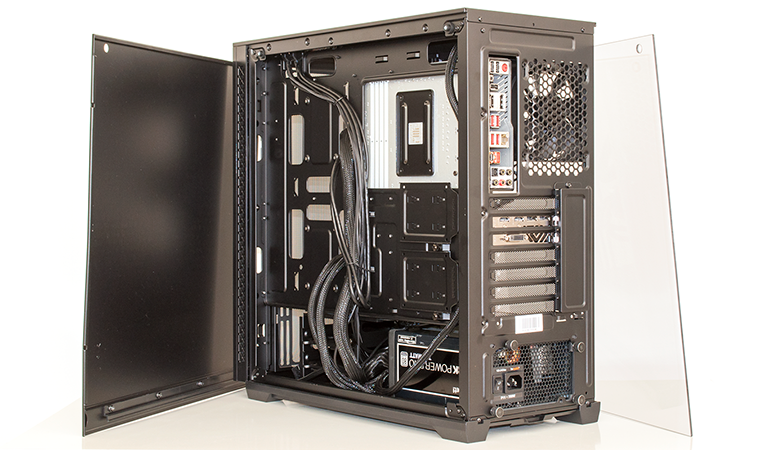 There are a few small tweaks that Deepcool could make to elevate the Matrexx 70, yet it remains a sleek-and-simple foundation for a powerful build. We like the fact that the side panels slot into inserts before being fastened at the top via thumb screws - no awkward alignment issues here - and the front panel is removed at the press of a button. It's all easy to work with, though we were amused to find the protective film on our review unit's front panel was sandwiched between the glass and plastic rails, making it horribly difficult to remove. A cock-up at the factory on this very early sample, we presume.

Still, all things considered, it's a nice case to build into, with tool-free elements in most of the right places. Having the best part of 30mm behind the motherboard tray is decent for excess cabling, and there are plenty of tie-down points, but do make a bit of effort as too much bulk can cause the rear side panel to bulge in the middle. We encountered few issues installing our AMD Ryzen test platform, and the finished product ultimately looks more expensive than the Matrexx 70 price tag would suggest.