The Samsung SSD 980 series is starting to appear at retail outlets in Europe, as well as in an official product page on its Thai site. This appears to be Samsung following up its Samsung 980 Pro PCIe 4.0 NVMe SSD series with a range of more affordable devices which have undergone various key specification snips to reach down to lower price points.

Samsung hasn't officially launched these 'non-Pro' SSD 980 drives but ComputerBase.de found some listed at various European retailers. Happily there are enough specs shared by the various sources to make sense of the new SSDs – though some might be unhappy about the scale of the cutbacks, hopefully the actual retail pricing will strike the right balance – you pay your money and take your choice. 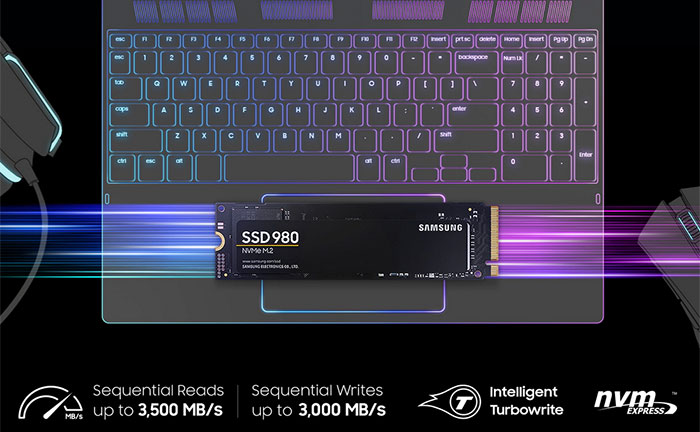 First, one of the major cuts from Samsung SSD 980 Pro to SSD 980 is the lack of DRAM cache on the new cheaper models. This spec snip can have a big hit on IO performance as of course DRAM is much faster than the NAND, and the cache can, in theory, help to reduce NAND wear.

Another big spec change here is that the Samsung SSD 980 uses a PCIe 3.0x4 interface (instead of PCIe 4.0 x4). This change has a big impact on max transfer rates, as you will see in the comparative spec table below.

The max transfer and IOPS figures for the Samsung SSD 980 are much reduced compared to the Pro version. However, many other base features of the drive remain the same; the same NAND, and even the same endurance ratings and warranty.

Retailers are expecting stock of the Samsung SSD 980 devices by the end of the month. Samsung should be officially announcing these drives shortly on its global news blog.

Posted by kalniel - Fri 05 Mar 2021 12:43
Hmm, rebadged 970 Evo+?
Posted by 3dcandy - Fri 05 Mar 2021 13:04
For many those speeds will be more than adequate. Lack of dram is a bigger problem. I'm suprised that the Pro is stuck on nvme 1.3 though
Posted by Rob_B - Fri 05 Mar 2021 13:05
Relative speed cut in half but realistically are the targeted users going to notice? I'm still on SATA SSDs so even going to this would be a huge increase and I probably wouldn't be able to tell, I'm probably also someone who would notice vs a ‘normal’ PC user.
Do ‘normal’ users even notice the lack of DRAM?

Rob_B
Relative speed cut in half but realistically are the targeted users going to notice? I'm still on SATA SSDs so even going to this would be a huge increase and I probably wouldn't be able to tell, I'm probably also someone who would notice vs a ‘normal’ PC user.
Do ‘normal’ users even notice the lack of DRAM?

Seems like these have a market and for the ~10-20% price difference I'd be totally OK going with the non Pro!

Oh you can tell alright…. makes everything better, faster, smoother
Posted by CAT-THE-FIFTH - Fri 05 Mar 2021 13:26
When you copy over files,etc its noticeable. Samsung SSDs also tend to be overpriced so its quite likely NVME SSDs with DRAM caches from WD,etc will be probably available for similar money or less.