SSDs are significantly more popular than HDDs, with the flash-memory based storage devices creating clear blue water between its sales units vs HDD units sold in 2020. However, in terms of exabytes shipped, HDDs continue to outpace their more modern solid state cousins and for the first time ever have shipped over a 1,000 exabytes (1 zettabyte) in total during the last year.

TrendFocus has looked at 2020 (as well as Q4 2020) in its latest report on the PC storage market. I've compiled a table with the important numbers for the year, below.

The obvious difference between the SSD and HDD storage market is that the latter devices have on average a much larger storage capacity. The average SSD according to TrendFocus data is 0.62TB, with the average HDD coming in at 3.92TB. Although there were fewer HDDs shipped than the year previously, the average capacity has grown enough to mean that the exabytes shipped figure is up by 13 per cent over the year, and for the first time ever reached beyond 1,000 exabytes or 1 zettabyte.

The continued demand for large capacity HDD storage comes mainly from enterprise servers rather than the PC market where significantly fewer HDDs are being used.

In its report TrendFocus also shared Q4 data with the sales volume split between the various vendors like Samsung, WDC, Kioxia and so on. Those are actually the top three SSD suppliers with 26.1 per cent, 20.3 per cent, and 10.9 per cent of the market by units sold, respectively. Samsung is even more dominant in exabytes shipped, with 32.8 per cent of the market by this metric. 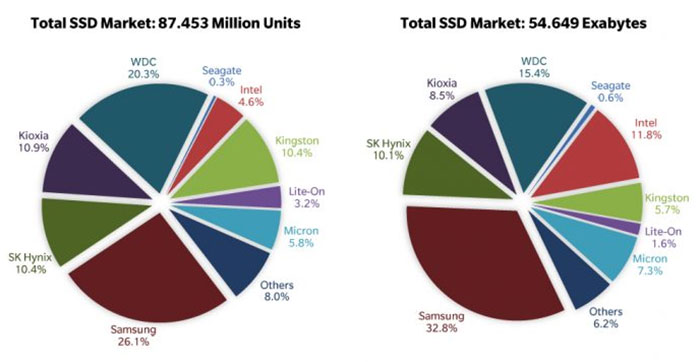 then a search and it's Toshiba

which is what Kyoxia is too
Posted by LSG501 - Tue 16 Feb 2021 11:34
So the ‘average’ capacity for both is around the £100 price point…. which I'd say is true for most people I know. Anything after that just doesn't work out as ‘balanced’ in terms of price versus capacity imo.

I'm shifting to primarily ssd only on the pc (nas is still hard drives due to capacity) and while I'm keeping 1 or 2 hard drives in the case they're only for ‘archival’ purposes.
Posted by CAT-THE-FIFTH - Tue 16 Feb 2021 12:02
Most systems sold with boot drives use an SSD now. But for longer term storage,HDDs tend to be used,and these are purchases done over a longer period,as they are chucked into storage arrays.
Posted by rave_alan - Tue 16 Feb 2021 12:36
Hdd is becoming vhs of this decade