Samsung has taken the wraps off its latest line of consumer SATA SSDs. The new Samsung 870 EVO SSDs introduce the latest Samsung controller and flash NAND to this product line. The result is that the 870 EVO consumer SATA SSDs deliver "38 per cent higher random read performance speeds up everyday computing tasks and 30 per cent improved sustained performance," according to Samsung's in-house testing.

The new 870 EVO "delivers a compelling mix of performance, reliability and compatibility for casual laptop and desktop PC users as well as Network Attached Storage (NAS) users," said KyuYoung Lee, vice president of Memory Brand Product Biz at Samsung Electronics. Lee also hinted that these might be the last new SATA SSDs from Samsung, and it is true that you can't really get anything faster attached via SATA III spec connections. 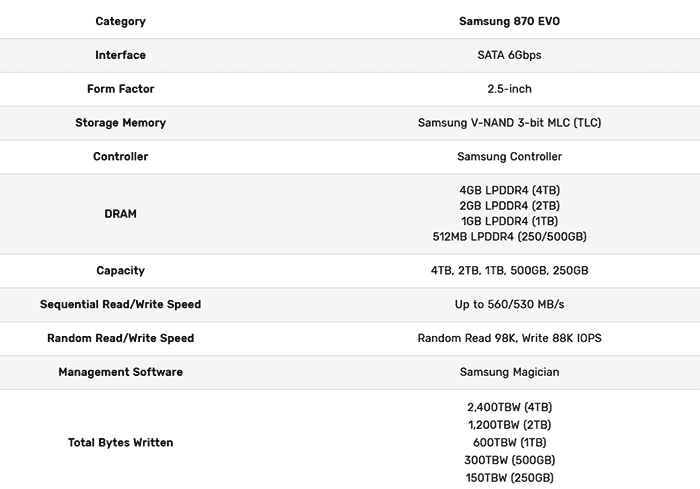 Above you can see the full specs table of the Samsung 870 EVO range. No specific details are given about the 'new' controller, but Samsung says the flash storage chips are its own V-NAND 3-bit MLC (TLC) components. Thanks to the component choice users will benefit from the maximum SATA sequential read and write speeds of 560 and 530MB/s, respectively. Furthermore, the DRAM caches, large variable SLC buffer, and the drive's Intelligent TurboWrite technology helps maintain its peak performance levels.

You can see in the table that the TBW endurance rating varies per drive capacity, but the whole range gets a five-year warranty. You can manage and monitor these drives using the supplied Samsung Magician software. 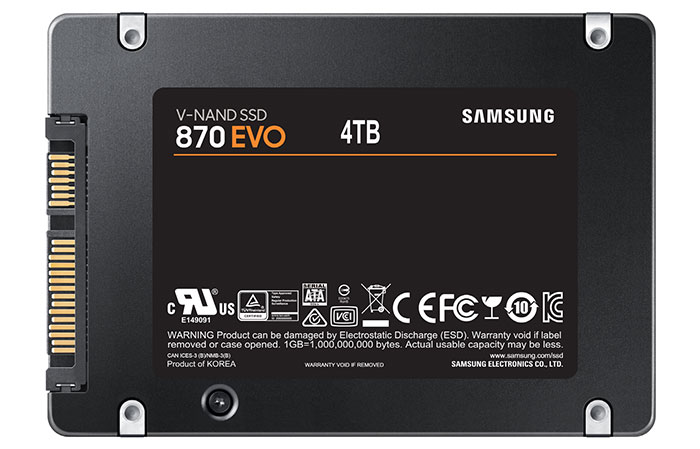 Did Samsung say this? I genuine imagine I'd find it difficult to tell the difference between an 860 and this :/

Yeah I doubt most people would notice it in those instances (can't say I noticed any difference between my 850 evo and 860 evo), however the up tick in random read/write could be beneficial in applications that go back and forwards with ‘random’ data to the drive… I'm thinking like a scratch disk or similar.

Having said that I do wish the price was a little cheaper….
Posted by Core2Extreme - Thu 21 Jan 2021 06:00
I'd be curious to read a review with comparisons to the 850 Evo and 860 Evo. It's plausible to me that random read and write improvements could make a difference in a SATA SSD. First because unlike sequential speeds, even on high end SSDs these rarely saturate SATA bandwidth, and also because I've seen the impact in some workloads such as code compilation.