Phison has launched its second gen PCIe Gen 4x4 NVMe SSD solution. The new PS5018-E18 (E18) PCIe 4.0 controller is the successor to the popular E16, released in late 2019, and is claimed to be the first to break the 7GB/s barrier. According to in-house testing the new E18 controller enables at least 50 per cent data transfer performance improvements compared to the E16. 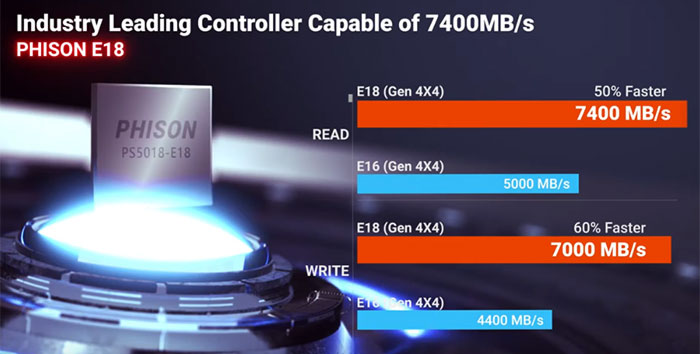 The headline performance that the E18 enables is; sequential read performance up to 7.4GB/s, and write performance to 7.0GB/s. Moreover, the eight-channel E18 can deliver up to 1 million IOPS and support SSDs up to 8TB.

In a press release about the E18, Phison boasted about its year and a half lead over competitors thanks to its foresight in partnering with AMD. In turn, AMD thanked Phison for its partnership and pushing for "new levels of storage performance across the entire PC landscape".

The PS5018-E18 is said to be ideal for gamers, content creators, and computing enthusiasts but at the time of writing we don't have any indicative dates for devices shipping with this controller.

Maybe when I next upgrade. Who knows.