Silicon Motion has launched a trio of new consumer SSD controllers. The portfolio has been created to cater for PCIe 4.0 NVMe 1.4 SSD device makers and consists of the SM2264 for performance, SM2267 for mainstream and SM2267XT for value DRAM-less client SSDs. 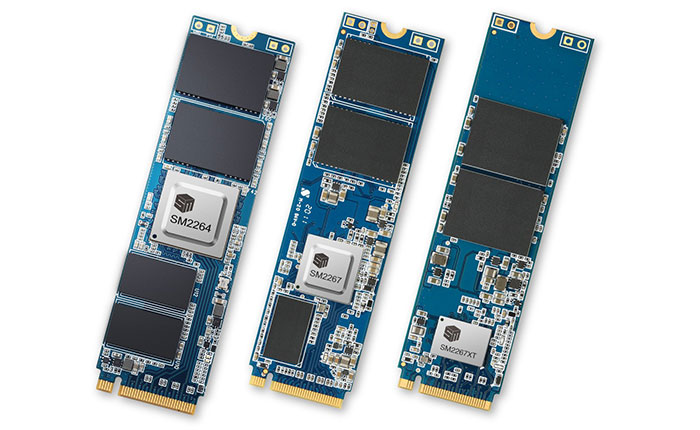 According to Silicon Motion the new controllers have been designed from the ground up with innovative hardware features implemented, and optimised to maker the most of the PCIe 4.0 interface. As well as the data transfer and access time performance benefits the designs boast, consumers will benefit from advanced error correction, as well as data path and EMI protections.

The premium offering in the lineup is the SM2264 which features a quad-core ARM R8 CPU with four lanes of 16Gb/s PCIe data flow and supports eight NAND channels with up to 1,600MT/s per channel. This controller is built on 12nm and enables high throughput, lower power consumption, and data protection while delivering sequential read/write performance of up to 7,400/6,800MB/s and random read/write speeds of up to 1,000K IOPs. Silicon Motion nots that the SM2264 is tested for the latest and next generation 3D TLC and QLC NAND and is also ideal for automotive, having built-in SR-IOV capability that provides direct, high-speed PCIe interface for supporting to up to eight Virtual Machines. Compare the specs of the SM2264, and its mainstream and value brethren, below.

As the new lineup of controllers has been announced they have already been selected by numerous leading PC OEM and SSD manufacturers for upcoming storage products. The SM2264 is currently sampling to leading customers, meanwhile the SM2267 and SM2267XT, for mainstream and value clients respectively, have entered volume production.

LSG501
Curious about the highest spec one (SM2264)…. wonder which brands will use it and if it's any good in ‘real world’ use.

I just find it amusing that it's run by a quad core ARM CPU. I mean I know these things need controllers, but needing a CPU to help feed a CPU data I'm finding quite ironic.
Posted by LSG501 - Wed 21 Oct 2020 17:08

Iota
I just find it amusing that it's run by a quad core ARM CPU. I mean I know these things need controllers, but needing a CPU to help feed a CPU data I'm finding quite ironic.

I'd say it's more about handling the throughput with pcie4 these days, not to mention they often seem to have built in encryption etc so having ‘dedicated’ hardware isn't actually a bad thing and ARM is likely a good platform to build around due to it being partially modular etc.

It's not just this one using an arm cpu either, the Samsung 970 pro uses a 5 core arm based controller and I wouldn't be shocked if newer ones from Samsung is using arm too, as I would suspect other brands.
Posted by DanceswithUnix - Wed 21 Oct 2020 19:29

Iota
I just find it amusing that it's run by a quad core ARM CPU. I mean I know these things need controllers, but needing a CPU to help feed a CPU data I'm finding quite ironic.

That seems fair enough, but it is the speed of these controllers that gets me.

I dug out my Atari ST recently for the kids to have a laugh at. 8MHz and 1MB of ram got me through university, and now my mouse has more computing power than that (and probably a sizable amount of ram as well).