Sabrent has launched an update to the HEXUS Performance Award winning Rocket NVMe 4.0 SSD in the shape of the Sabrent Rocket 4 Plus. The new device offers next level SSD performance according to the device maker with "revolutionary speed," and storage capacities up to 2TB. Sabrent even goes as far as claiming its Rocket 4 Plus is "the world's fastest NVMe SSD". 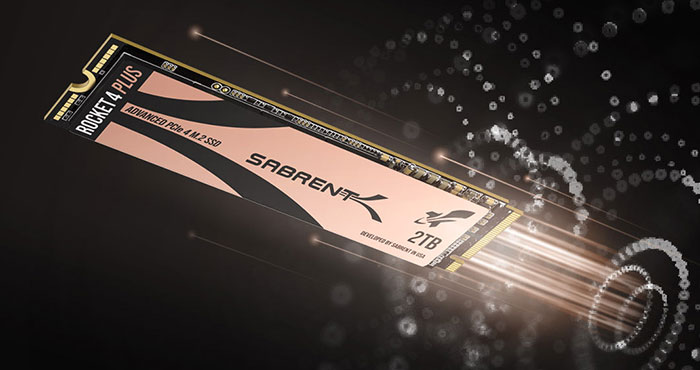 Headlining claimed performance metrics for the Sabrent Rocket 4 Plus are; a 7,000MB/s sequential read speed, and 6,850MB/s sequential write speed. These figures represent a double boost or better against the speeds possible with a comparison reference 'Normal PCIe 3.0 SSD'. Happily for Sabrent it is also matches the shiny new Samsung 980 Pro for reads but easily beat it for writes (the Samsung device's sequential write speed is 'just' 5,000MB/s). This weekend Samsung briefly listed its 980 Pro SSD before taking the listing offline.

The technologies behind the Sabrent Rocket 4 Plus are as follows:

It looks like Sabrent has spent quite some effort in concocting the 'custom heatsink' design for the Rocket 4 Plus. It is claimed to be compatible with both single/double sided M.2 2280 SSDs. As you can see from the exploded view of the construction the SSD memory chips are sandwiched by thermal tape and put into a U shaped aluminium tray. On the upper side Sabrent layers the following; an aluminium heatsink, copper heat coils, and a grooved heat spreader. 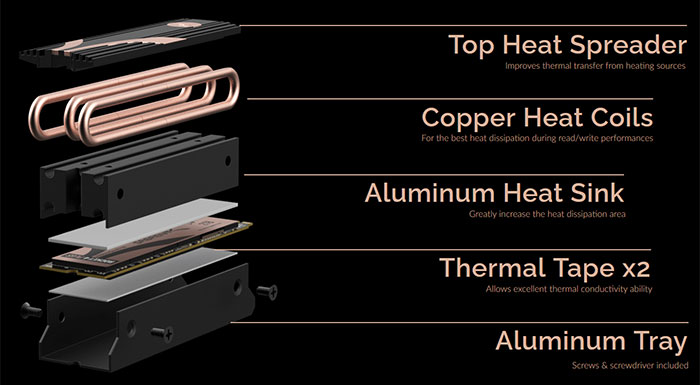 At the time of writing we don't have pricing and availability for the Sabrent Rocket 4 Plus but one can hope that it will retain the competitive pricing seen with previous models. Additionally, it may be possible to buy the Rocket 4 Plus sans-heatsink and save £10 or £20, if history repeats.

Posted by LSG501 - Tue 01 Sep 2020 12:24
I want to see a real world comparison between the ‘worlds fastest’ and it's competitors when being used as things like a scratch disk when doing things like photo/video editting, 3D modelling/rendering etc rather than just ‘benchmarks’… maybe an article hexus could consider doing….

Oh and that heatsink looks just perfect for fitting underneath your gpu where a lot of the nvme slots sit…./s
Posted by blokeinkent - Tue 01 Sep 2020 12:33
Look forward to some proper benchmarks on this. Sabrent make great drives but are often overlooked for some reason compared to the “usual players” in the game.
Posted by Corky34 - Tue 01 Sep 2020 12:34
No mention of the IOPS, personally that's more important for me than the overall ‘speed’.

rave_alan
5 gb/s, that is a lot, Windows will boot in 3 seconds.

I've got the previous top-end Rocket 4 drive from Sabrent - which already boots Windows 10 in ~3 seconds (so long as Windows Update is not applying changes!) - so this should up the game further.

Will be interesting to see the price point given the super-fast TLC Flash cells being used.