Team Group has launched a new line of 2.5-inch, 7mm thick, SATA SSDs for gamers. The Team Group T-Force Vulkan G series is available in 512GB and 1TB capacities and the maker boasts that it uses the latest 3D NAND flash memory and SLC caching. With regard to this new SSD and its 'gaming' claims, there is nothing in particular that makes this SSD a good or bad choice for gamers compared with rival non-gaming branded SATA SSDs.

Key specs of the T-Force Vulcan G gaming SSD are tabulated below: 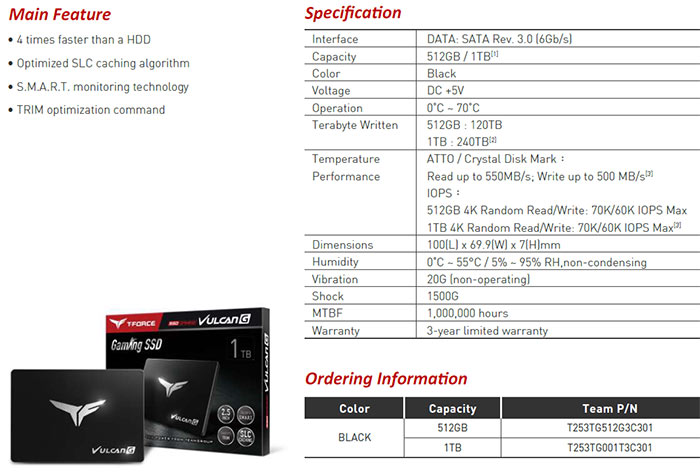 Above you can see that the performance of these SSDs is basically what you might expect of any affordable modern consumer SATA drive. Data read/write performance figures are very much in line with the affordable Kingston KC600 SATA SSD line, which HEXUS reviewed in December 2019. However, the Vulkan G falls somewhat behind in random read/write IOPs (the Kingston achieves 90K/80K).

Unlike many Team products, the Vulkan G is somewhat minimal - no aRGB, no 'water cooling' or graphene copper cooling tech. The firm has still made sure these devices look rather cool though. A T-Force logo is printed on the case with a diamond-cut pattern which provides a crisp premium overall look. So, Team Group are trying to maintain their gaming branding but do so at an much more accessible price point. How accessible? In an email to HEXUS the following MSRPs were shared: 512GB US$60.99, 1TB US$106.99. We don't have any word on availability but these will be available soon.

Pondering over previous Team Group launches over recent months one gets the impression the firm likes to add tech frills, and simply isn't shy of adding features to PC components which some might call gimmicks. HEXUS has reviewed its intrinsically good products, like the T-Force Delta Max RGB SSD with aRGB display, and Cardea Liquid M.2 PCIe SSD, which look great and will attract a certain customer, but those customers will have to pay a premium for style over substance.

Posted by Gentle Viking - Tue 11 Aug 2020 17:08
Who do SSD when you can do “ 4 times faster than a SSD ”
I doubt very much i will replace my one SSD when it die, any new drive will have to mount strait onto my motherboard.

Even if i just have room for 3 drives there, thats plenty for me, and overflow still go to old spinners here.
Posted by Ttaskmaster - Tue 11 Aug 2020 18:14

Because whatever replaces my HDDs will need to be both affordable and of equal capacity.
So until there's a reliable 8TB m.2 NVME available for, say, £150, it doesn't matter a jot how many times faster something is.
Posted by Gentle Viking - Tue 11 Aug 2020 20:03
Yeah i get it people moving big data, i just deal in chunks which i can move around at my convenience, usually to a spinning drive as after that i dont really need to access it much anymore.
1TB drives are plenty for my day 2 day stuff, even just 1 of those to be honest, i also just need 16 GB of RAM but i have 64 GB none the less.
And i am just on 64 GB as in all of the years where 8 would have been enough i have been at 32 GB
Posted by Xlucine - Tue 11 Aug 2020 23:06
It's nice to see an SSD launch for sensible prices
Posted by rave_alan - Wed 12 Aug 2020 00:22
There is a thing about gaming last 3 years - RGB+red+transparent cooling pipes. If gamer wants something with normal price, he has to sacrifice one of the “important” features, good that team group understands there is a public for hardware without cristmas decoration.