Cloud storage data centre company Backblaze has just published its review of 2017, with regard to hard drive reliability and related stats. The company ended the year with 93,240 HDDs in operation; that’s 1,935 boot drives, and 91,305 data drives. Since 2013 the company has been monitoring and reviewing reliability of the HDDs it uses and it has periodically, and generously, shared its findings for 2017 a couple of days ago via its official blog. 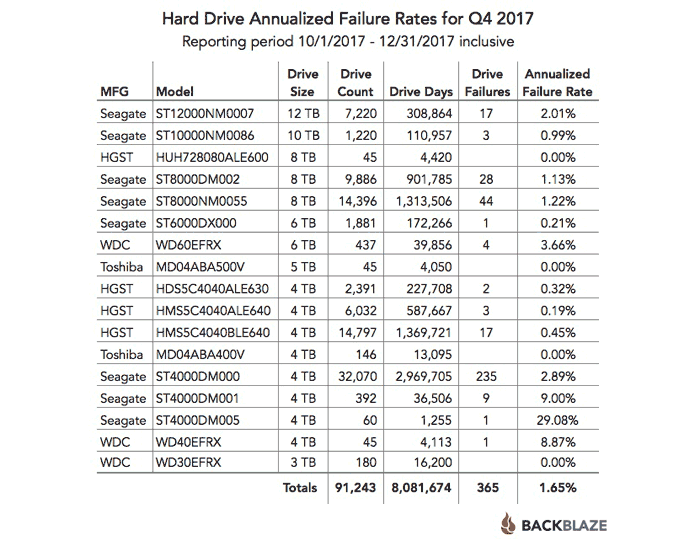 Above you can see Backblaze’s Hard Drive Annualised Failure Rates (AFR) for the most recent quarter. You will note that the AFR figures vary widely and Backblaze admits the figures can be volatile, “especially for models that have a small number of drives and/or a small number of drive days”. For example the Seagate 4 TB drive, model ST4000DM005, has a annualized failure rate of 29.08 per cent, “but that is based on only 1,255 drive days and 1 (one) drive failure”. On the other side of this volatility an 8TB HGST drive looks to offer enviable reliability, for example. 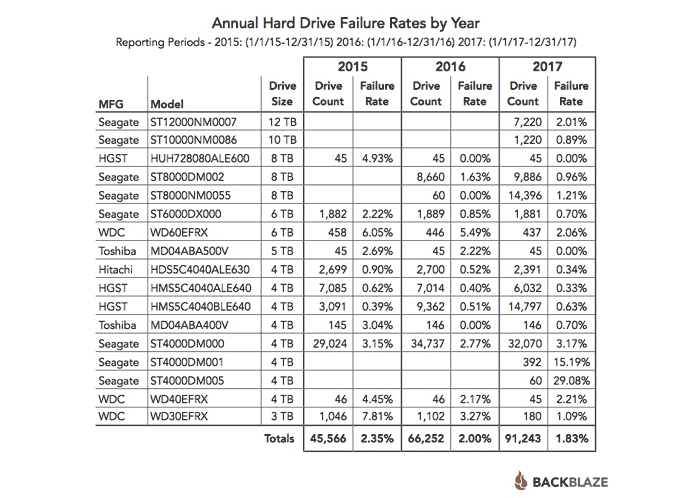 Backblaze has put together a longer term chart which is good to see as most of us expect an HDD to last many years. Above you can see annualised failure rates by year for 2015, 2016 and 2017. Weighing up this data Backblaze notes that 6TB Seagate and WDC models seem to be getting more reliable. The cloud storage company is most impressed, however, by its HGST/Hitachi 4 TB models, which delivered sub 1 per cent failure rates for each of the three years. These drives are “amazing,” gushed the Backblaze blog. 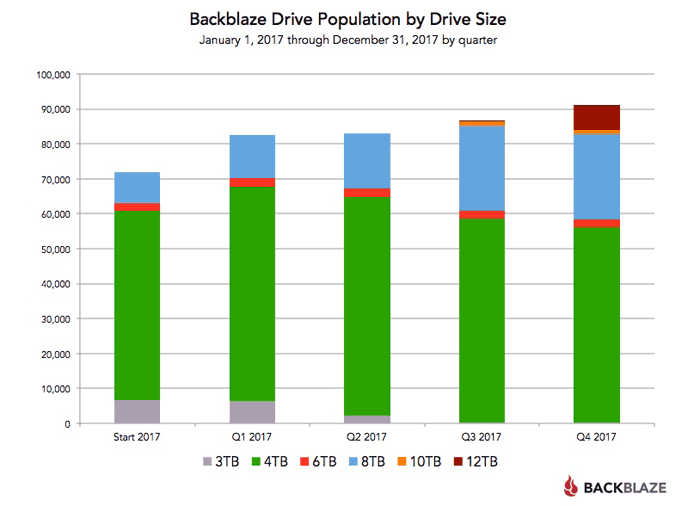 If you find the above facts and figures particularly interesting Backblaze is presenting a webinar ‘Backblaze Hard Drive Stats for 2017’ on Thursday 9th February, 2018 at 10:00 Pacific time. If you take part you will witness the Backblaze team dig deeper into quarterly, yearly, and lifetime hard drive stats – and more.

From my own server, i've had 15 8TB seagate drives running for over three years without a single failure - that's 16,000 drive days. Maybe I should publish my own stats?
Posted by DaMoot - Mon 05 Feb 2018 17:29
Consumer drives have been reliable for a long time. In 20 years, and dozens of hard drives, I've only ever had 2 failures. Only one of those was a catastrophic failure.

I've seen more failures at work in the past 12 years with my current company with so-called Enterprise-grade drives than I've ever seen in my personal and professional experience with consumer drives.

I think the takeaway is that yes, drives are extremely reliable for easily the past 15 years, and WD still isn't sure it knows how to make a reliable hard drive! lol
Posted by Ozaron - Tue 06 Feb 2018 10:00
My last WD Blue 1TB drive failed after barely more than a year (of light use) while having a virus scan run on it. Maxed out at around 260GB stored. Welp.
Posted by chinf - Tue 06 Feb 2018 11:42
I have a small population of 3.5" hard drives of varying ages, including Seagates, Samsungs, HGST and WD, and the worst performers have been the Seagates by a country mile.

Among my most recent failed drives were two Seagate ST2000DM001s which saw little use and barely lasted a year each before failing with very quick degradation, but my six ancient 160GB IDE Barracudas are still working fine though not used much anymore. I've had a 1TB WD Green slowly fail that was in constant use for several years and lasted well beyond warranty, and I've got several other WDs of varying ages and they're fine. No problems yet with my four 500GB Samsungs even though they're now pretty old.

Not sure if Seagate will fix their reliability before spinning rust becomes extinct.
Posted by shaithis - Tue 06 Feb 2018 11:50

chinf
Not sure if Seagate will fix their reliability before spinning rust becomes extinct.

I doubt it, the STxxxxDM001 drives have been around for a number of years now and have been shoddy since day 1, can't see that changing now.