On Friday, Microsoft published an update on Windows 11 minimum system requirements. It also released a new version of the PC Health Check (upgrade advisory) app for Windows Insiders. The information in the article was quite straightforward: it was helping a few older Intel CPUs over the minimum bar; and the new Health Check app would be fully up-to-date with the latest minimum specs, informative, and helpful in its feedback. 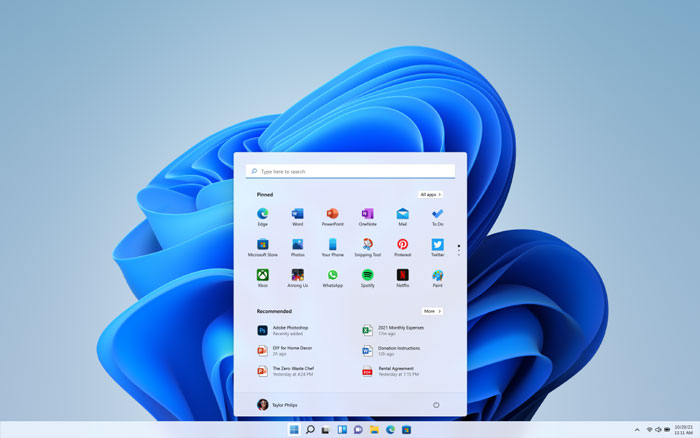 Continuing with the official Microsoft Windows Insider information that was revealed by the blog, the following Intel processors would be added to the approved list of 64-bit processors:

Microsoft noted that it had looked carefully at first gen AMD Zen processors, but they still didn't make the grade. It then re-iterated its Windows 11 design goals of reliability, security, and compatibility (twice) to back up its hardline decisions to rule out some relatively modern processors for full Windows 11 compatibility. 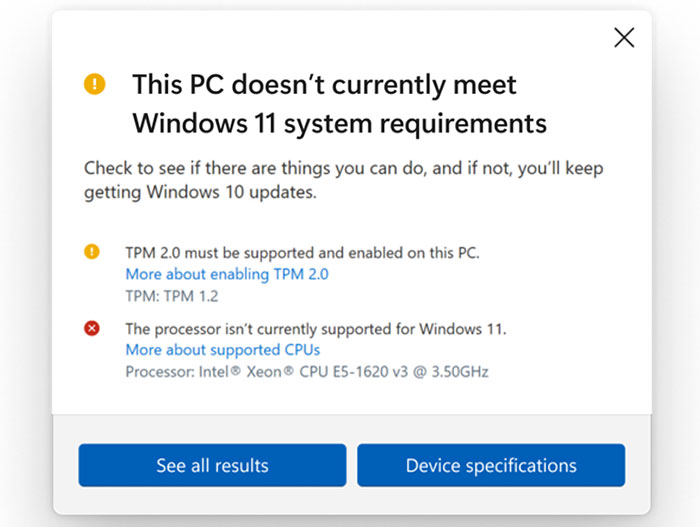 If the above was nice and clear – I tried to make it so – it starts to get a bit confusing now, as some Windows reporting stalwarts like Mary Jo Foley and Paul Thurrott found out that there will be a way to install Windows 11 on older PCs, with hardware thoroughly out of the bounds of the compatibility lists.

It turns out that Microsoft will let people running older unsupported processors install the final version of Windows 11 when it is released, via an ISO download. These PCs still must meet the general minimum requirements of TPM 1.2 enabled, 64GB minimum of storage, 4GB of RAM, and a 1GHz+ dual-core CPU.

There is a 'gotcha' to be aware of, though. Such unsupported PCs will exist in an "unsupported state" and may not be allowed access to Windows 11 security and driver updates via Windows Update. With so many threats faced online by PCs, this seems a bit dangerous, but just like these renegade Windows 11 users start with the ISO, perhaps they can get alerted to go and download important updates/patches manually.

Windows 11 final is expected to be released in October, with free updates for existing Windows users wishing to upgrade rolling out early next year. This should give Microsoft enough time to change its minimum hardware requirements another couple of times.

Posted by Ozaron - Mon 30 Aug 2021 11:22
I'm convinced there will be people who see that they won't have to deal with Windows Update as often and come to the conclusion that it's an improvement over the standard setup.

Don't think I would be one of them, but perhaps with a sturdy enough AV suite you could make it all work.
Posted by watercooled - Mon 30 Aug 2021 11:30
Ughh, assuming this isn't some sort of miscommunication, what were they thinking? Why on Earth would it be a good idea to allow people to use an OS if they're not going to get security updates? That's just asking for widespread trouble. Unless this is just a case of modifying the install media to force it to work.

Ozaron
I'm convinced there will be people who see that they won't have to deal with Windows Update as often and come to the conclusion that it's an improvement over the standard setup.

Windows Update can be its own worst enemy at times, but it's almost never a solution to just disable it. That's how we have ended up with prolific malware over the years. Plenty of the notorious, advanced malware of recent years have been completely inoperable on fully patched Windows installations.

Ozaron
Don't think I would be one of them, but perhaps with a sturdy enough AV suite you could make it all work.

watercooled
Ughh, assuming this isn't some sort of miscommunication, what were they thinking? Why on Earth would it be a good idea to allow people to use an OS if they're not going to get security updates? That's just asking for widespread trouble. Unless this is just a case of modifying the install media to force it to work.

I'm not exactly known for being a fan of W10 (and therefore, by extrapolation, hardly either a W11 or MS fanboy) but I think we have to give them a bit more credit than that.

It looks to me, from several different reviews but not having gone back to MS's own statements, that exact wording is important here, and nuanced.

As I understand it, MS haven't (now) simply suggested they're going to actively seek to block users with ‘unsupported’ hardware. They're just not going to go out of their way to facilitate it. They haven't said they won'tallow security updates to such users, merely that it may not work. much the same applies to updates. It may not work, but by inference, it also may work, and that it “may” not suggests they're not testing it either way.

It seems to come down to "We're intending W11 for hardware meeting <insert list> and if you are not on that supported list, then we simply haven't and aren't going to either test it, or expend effort to ensure it works. If it does, good for you but if it doesn't, don't come crying to us - it's unsupported."

And even as not exactly an MS fan, well, they can't support everything going back in time. They seem to be insisting on TPM 1.2, and from the perspective of future security, I have trouble arguing with that. If, in order to provide additional boot security, they must insist on that, then … fair enough. I mean, if the OS provides a route to bypass that, then that gives a route for hackers, malicious code, etc, to bypass it too. Maybe their stance on TPM is that it's been around for some years and, well, it's time to make life harder for the nasty and/or criminal element. Maybe someone will find a way to get W11 onto non-compliant machines, but MS seem to want no responsibility for anything that might happen as a result.

And users with non-compliant still have a couple of viable options, including switching to Linux, or just carrying on with W10 for another 4 years, until that goes EOL.

Overall, we're still in beta territory and I don't think we can conclude much about their final posiion until we get the criteria attached to actual product releases, not betas.
Posted by Saracen999 - Mon 30 Aug 2021 12:18

Windows Update can be its own worst enemy at times, but it's almost never a solution to just disable it. That's how we have ended up with prolific malware over the years. Plenty of the notorious, advanced malware of recent years have been completely inoperable on fully patched Windows installations.

Agreed. An educated “not quite yet” is one thing. Delaying a while is okay, provided it's understood that not doing so involves an element of risk from not patching potential weaknesses. It also involves not risking issues from errors in the patch itself, and that's a fine balance.

There is a danger, though, that some users will select “next week” indefinitely, and months later, are still saying “next week”. That said, it's MY machine, and if I'm daft enough to do that, it's my risk. The alternative, of MS over-riding my decision and installing anyway, whether I want it or not, ignores the possibility that I know the risks, but have a reason for refusing a given patch, perhaps because I already tried it and know it breaks something important to me.

Different users have diffeent levels of both expertise, and installed hardware and software. For non-techie users, forcing an install might be a good idea but for those that know what they're doing, it is very presumtuous of MS if they over-ride a decision to not install, and do it anyway. It isn't their system. They sota can't win, either way …. except by putting the “don't install” option somewhere that you have to be looking for it, really intending to find it, to find it.
Posted by watercooled - Mon 30 Aug 2021 12:28
Yeah I suspect ‘miscommunication’ is the more likely scenario here. I really can't see a way they'd be intentionally digging that hole for themselves.

Regarding TPM, I'm inclined to agree. However, there are systems that support integrated TPM but are unsupported regardless, so that's not the only requirement. Supporting e.g. Coffee Lake but not Kaby Lake is curious as they're both effectively Skylake at the CPU core level, and as far as I know the GPU/chipset features are also close to identical, so I wonder if there are other platform changes they are considering, or just wanted to draw an arbitrary line in terms of supported hardware?