Last week, HEXUS reported upon the news that ye-olde Big Picture Mode was going to be superseded by the new Steam Deck UI – throughout the Steam universe. This seems to be Valve's understandable reaction to the warm welcome it got for its Steam Deck promo material featuring the new UI. It makes sense to provide a unified Steam UI across multiple devices and the web, of course.

In an update delivered to the Steam Client beta version for PCs on Thursday, we got a clearer view of the direction of travel of the Steam client in the coming months. Briefly, the Steam client has been updated with useful improvements in its; downloads page, library, Steam Input functionality, and more.

Some of the most useful beta updates are to be found in the downloads page section of the Steam UI, as highlighted by PC Gamer. This section now includes the Storage Manager, accessible via the Steam Downloads > Settings > Steam Library Folders. A sample screen showing the Storage Manager is shown below. 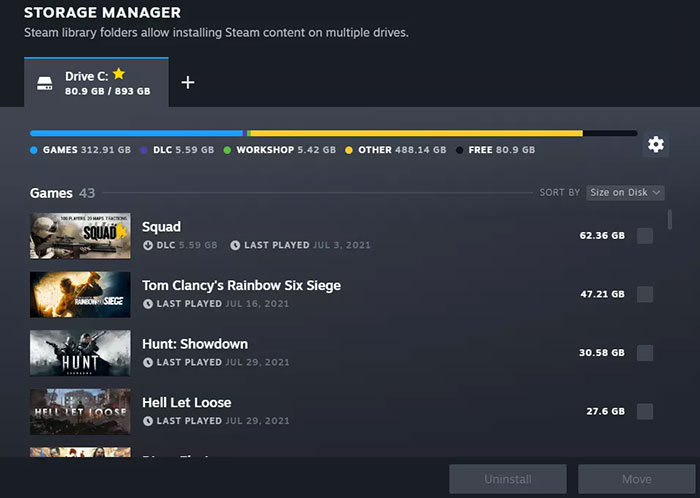 Each drive you use to house elements of your Steam library now has its own tab, and there is an easy click option there to move games between drives. I sometimes move games between my SSD and HDD, depending on whether I am playing a title often or not (I need to upgrade my SSD capacity). I guess storage management will be very useful to some Steam Deck users, to help with SD Card juggling.

Valve says that various download types in its Downloads Manager are now colour coded. Additionally, individual game download progress will include a display of the total progression completed for the download or update. It is noted that, previously, "the progress bar would only display the downloading content progress but not the disk allocation process, which would make an update to appear completed when it was not". Another useful change is that part-completed downloads are greyed-out, with a percent complete figure by the progress bar. Last but not least, the downloads queue is now fully orderable using drag and drop.

Other Steam Client changes include CPU optimisations to minimise the hit on your CPU when using Steam Input. The release notes also say that the current set of PowerA Xbox Series X controllers are supported now. If you are a Linux or SteamVR user there are updates for you, which you can check out at the link above.

Making the Steam client and its UI better looks a timely activity in preparation of Steam Deck launch, but is also a useful tool to combat PC competition from the likes of Epic and GOG, to firm up Steam as the PC Gamers' preferred store.

Ttaskmaster
If it's not games or DLC, what's that 488GB of ‘Other’ all about?
Is there that much guff and cosmetic junk in a typical Steam install?

As it's the C: drive it should be pretty obvious.