Maxon has released an updated version of Cinema 4D, its professional 3D animation rendering application. The new release is notable as being the first such tool to natively support the new Apple M1-powered Macs, which were announced earlier this week.

Alongside the release of Cinema 4D (R23) comes Cinebench 23 which relies on the latest Cinema 4D rendering engine for its hardware evaluations, comparisons, and benchmarking. Cinebench is very popular in the PC hardware testing community as it utilises the same professional 3D rendering tech as the Cinema 4D application and thus mirrors a real-world content creator use case, it takes advantage of modern processor features and technologies, and it is free for anyone to download and use. As with the related 3D rendering and animation application, this benchmarking software natively supports Apple's newest Macs powered by the M1 chip. 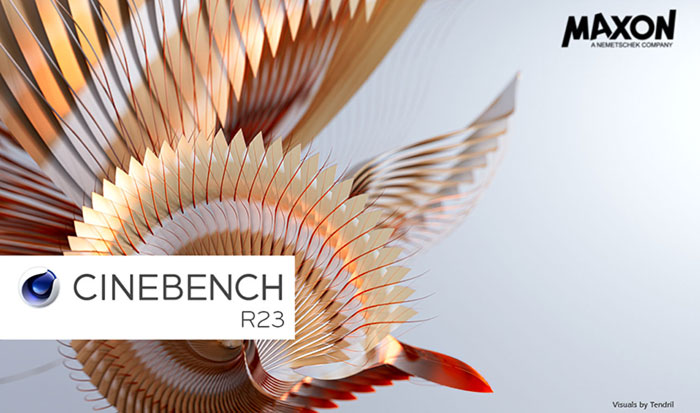 "For more than a decade, Cinebench has been the go-to tool for hardware manufacturers and industry analysts to evaluate system performance," said David McGavran, Maxon CEO, in an email to HEXUS. "Cinebench R23 delivers the most accurate and stable results for the latest hardware, including Apple’s recently announced M1-powered Macs, ensuring users are operating on the highest performing systems for demanding content creation and rendering workloads."

Further changes in Cinebench 23 that are worth pointing out include; distributions use the latest updated compilers, a minimum runtime is activated by default, more stable and accurate results are provided for high-performance systems, the application will run its test for a fixed 10 minutes period rather than until a scene rendering completes, and single core testing is now available without manually enabling the 'Advanced benchmark' option. It doesn't support GPU accelerated rendering, so is useful for CPU testing only.

Importantly, please note that benchmark scores from Cinebench R23 runs can't be meaningfully compared with scores from earlier versions of the software. On the topic of the results, please minimise any background tasks to get the best result. Systems with unsupported processors or lacking enough RAM to complete renders won't be able to run the benchmark, says Maxon. 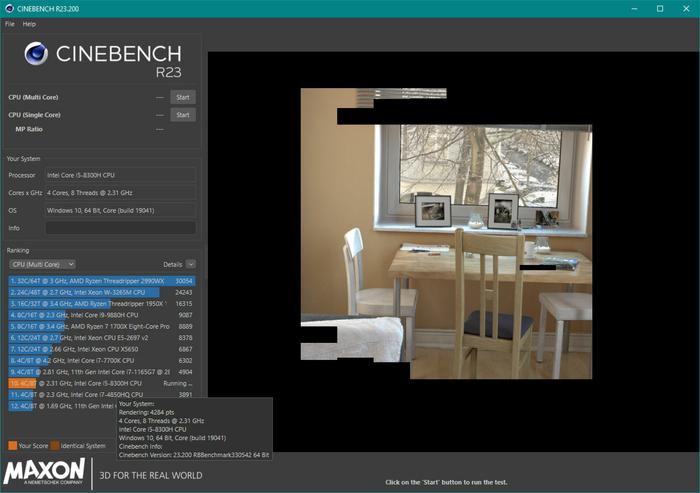 My Dell XPS 15 laptop with Intel Core i5-8300H processor got rather hot under the collar over the 10 minute multi-core test duration and scored 4,284 points. It completed the scene render a little over three times. I can't find any Cinebench R23 Apple M1 results at the time of writing but many folks have already tested their x86 PCs and Apple Macs.

I am currently learning Blender now, has come on leaps and bounds since the interface change and comes with features top end apps would love to have. Ie fluid/smoke/fire simulation.
Posted by 3dcandy - Thu 12 Nov 2020 16:54
8251 points Ryzen 7 2700 whilst working!
Posted by DanceswithUnix - Thu 12 Nov 2020 18:49
NOT an M1 result

There are supposedly Apple development kit scores leaked, so not the M1 something rather slower but still interesting. 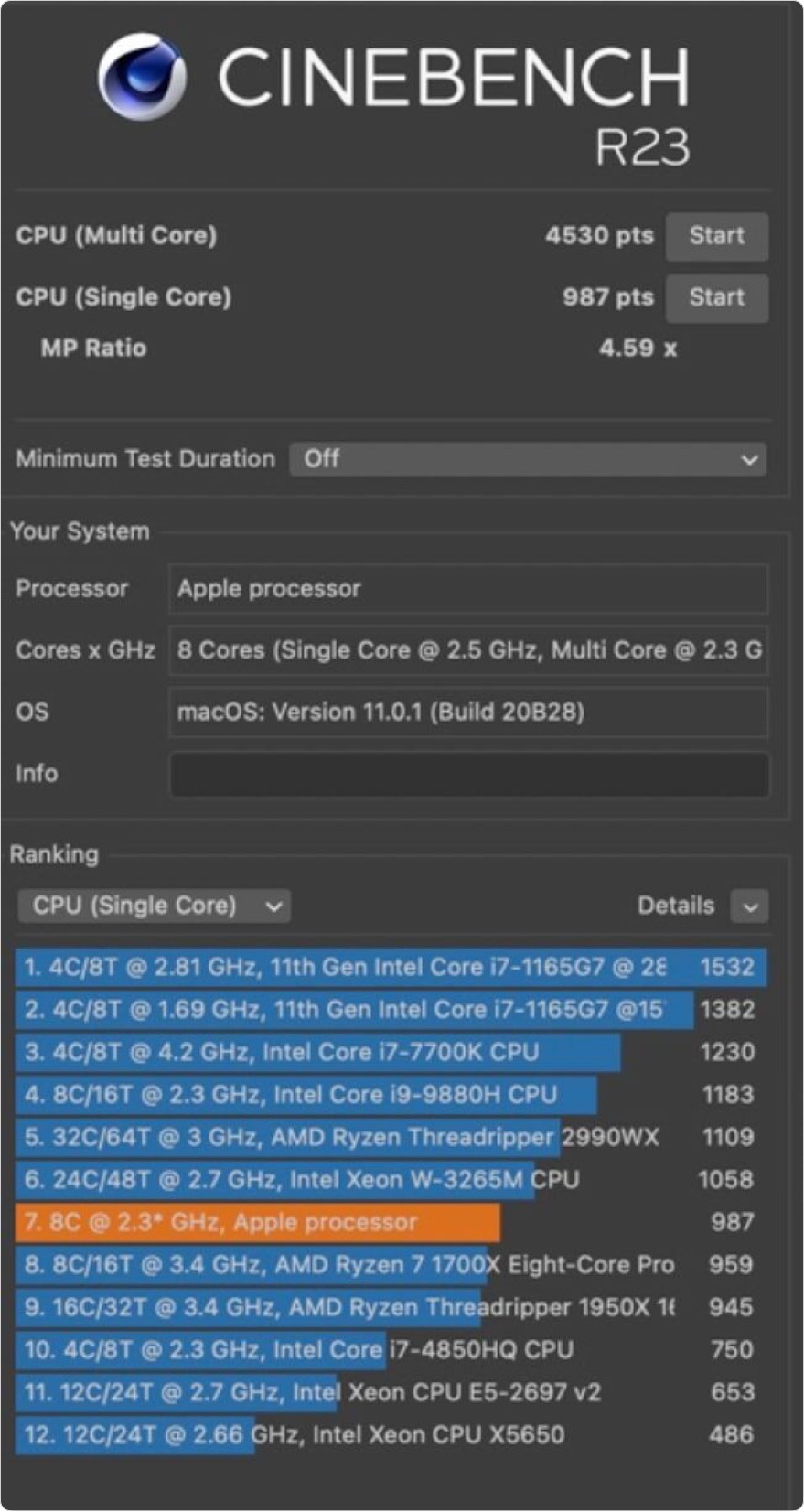 DanceswithUnix
NOT an M1 result

There are supposedly Apple development kit scores leaked, so not the M1 something rather slower but still interesting.

Makes you wonder why whoever posted it, didn't include any relevant information….
Posted by DanceswithUnix - Thu 12 Nov 2020 20:15

ohmaheid
Makes you wonder why whoever posted it, didn't include any relevant information….

You mean the stuff that would identify who had broken their NDA that says they must not benchmark the dev kit?