You are here:
Software Industry News

The source code for Counter Strike: Global Offensive and Team Fortress 2 has started to appear online, available to the public via various sites, portals and repositories. Apparently, the leaked code is from late 2017 and was released to game development partners at that time. In reaction to the news, some community servers have whisked themselves offline - fearing remote code execution flaw exploits might be incoming. However, Valve believes the code leak to be of no great concern in 2020.

Valve's official CG:GO Twitter account responded to news of the source code leak quite quickly. It summed up the situation as below:

We have reviewed the leaked code and believe it to be a reposting of a limited CS:GO engine code depot released to partners in late 2017, and originally leaked in 2018. From this review, we have not found any reason for players to be alarmed or avoid the current builds. 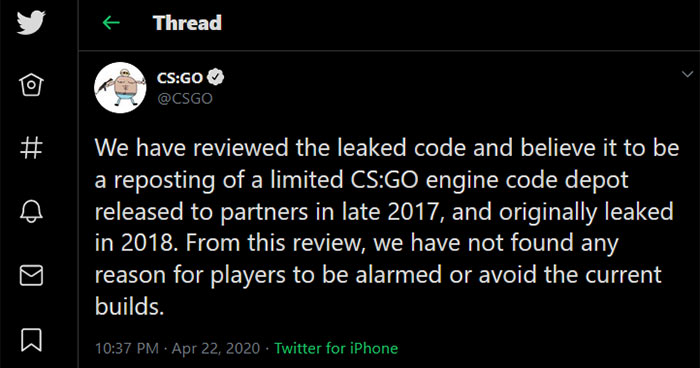 It went on to recommend gamers stick to the official servers "for greatest security" for the time being. Then Valve shared an update saying it would continue its investigations:

We will continue to investigate the situation and will update news outlets and players if we find anything to prove otherwise. In the meantime, if anyone has more information about the leak, the Valve security page describes how best to report that information.

SteamDB developer Pavel Djundik responded to reports of the leak yesterday evening by playing down any serious or cheating threats that it might precipitate. Djundik thought that the code might reveal some "better understanding of some mechanics and neat trivia, maybe some exploits," but would otherwise be of "very little" help to cheat developers.

Posted by Luke7 - Thu 23 Apr 2020 18:41
I think Mark Tyson may have been looking for an excuse to post that first image for quite some time…
Posted by aniilv - Fri 24 Apr 2020 02:14
Was quite a stretch in the first place that a 3 year old source code leak would somehow instantly mean people will steal all your money from your bank account.

aniilv
Was quite a stretch in the first place that a 3 year old source code leak would somehow instantly mean people will steal all your money from your bank account.

Was even more funnier when backtracking started.

It's source code, the game has changed alot in 2 years, but most of the code is still the same, until Source 2 (although portions of this are implemented now).

So there are still many possible vulnerabilities.

I don't suspect those who find exploits will make them public. Rather they'll use them for their own benefit. I suspect Spurce 2 will be implemented before any thing serious is discovered though.