One of the key pillars of next gen PC systems is going to be the introduction of DDR5 memory support. JEDEC released its final specification for DDR5 last July, and it wasn't long until SK hynix was producing DDR5 DRAM ICs. In December Team Group became one of the first PC component makers to outline its DDR5 memory module release plans, and much more recently Asgard launched its DDR5-4800 RAM modules for Intel Alder Lake platforms.

Without the DDR5 supporting platforms publicly available we just have to take JEDEC et al's word for it for now, with regard to the benefits that will be delivered. However, Chinese electronics company Longsys, owner of the Lexar brand since 2017, has launched its first DDR5 memory modules and simultaneously publicised a raft of performance data using well known benchmarks like AIDA64.

Longsys has launched its 288-pin ES1 DDR5 UDIMM memory modules at 6,400Mbps in 16GB and 32GB sticks, both with CL40 timings. Accompanying this news it shared some memory tests taken from a development board featuring Intel's Alder Lake-S ADP-S CRB, and running Windows 10 Pro x64 OS. 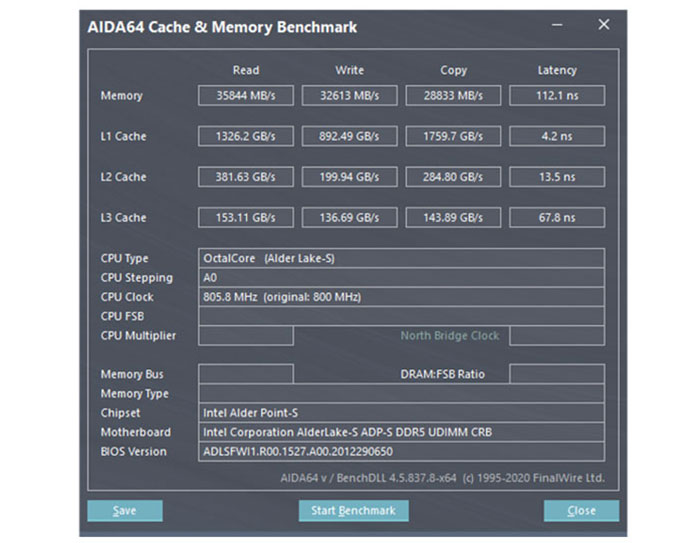 Two test suites were used by Longsys to assess and compare its DDR5 performance. Firstly in the Ludashi test, the memory scored over 190,000 it is claimed. That is more than double the benchmark score for Longsys DDR4 32GB C22 (91,575 points). As for AIDA64, I've put the results comparison below in tabular form. Results are good all round in AIDA64, except for the added latency.

A slight fly in the ointment of the above results is that Longsys shows BIOS screenshots of a DDR5-4800 module in use, but its benchmarks are said to be of a system packing a DDR5-6400 module. One might also expect the low clock speed of the Alder Lake ES (800MHz) to have an impact on all types of system benchmarks. DDR5 modules will eventually appear with speed up to DDR5-8400 or better and capacities up to 128GB each.

It won't be until Alder Lake-S and its supporting platforms are out later in 2021/early 2022 that we can hope to have DDR5 packing systems under test in the HEXUS labs.

HEXUS
That is more than double the benchmark score for Longsys DDR4 32GB C22.

Probably 3200cl22, since that's JEDEC. 3200cl16 in a current platform will get ~45gb/s read/write/copy so the testing platform isn't producing competitive numbers. They might be accurate in terms of comparing DDR4 vs DDR5, but it might not be!
Posted by Gentle Viking - Wed 17 Mar 2021 15:56
I am shooting for DDR5 in the next board / CPU / RAM upgrade, but it will probably end up as a whole system upgrade ( minus case and PSU / keyboard /mouse / screen )