G.Skill continues to push the capacities, speeds, and latencies of its memory kits with the new introductions to the glitzy Trident Z Royal family today. It has announced the release of new "extreme-speed DDR4 memory kits that push 16GB and 8GB modules up to DDR4-4400 with a low latency of CL17-18-18-38 across the board". To construct these modules G.Skill has utilised Samsung B-die ICs. 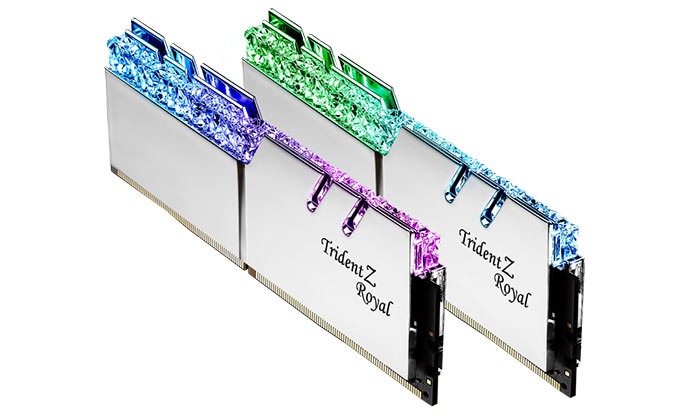 The focus today is on the Trident Z Royal 32GB (16GBx2) capacity kit. G.Skill asserts that 32GB if becoming the standard for gaming and performance PC builds, so this kit is a good choice as part of a new system spec. On a 4 DIMM slot board it would leave 2 slots for future expansion too. The new kit upgrades specs across the board, crows G.Skill, with improved memory frequency speeds, module capacity, and memory latency figures.

A table below sets out the specifications of the new Trident Z Royal 32GB (16GBx2) DDR4-4400 CL17 capacity kits. They feature at the foot of the table.

G.Skill says that customers will be able to get their hands on its new memory kits in Q3 this year, via the usual distribution partners.There is no word on pricing yet though.

HEXUS has reviewed G.Skill Trident Royal memory kits several times previously; these are aimed at Intel platforms. If you are an AMD Ryzen user you are steered towards its Trident Z Neo kits.

Posted by Ttaskmaster - Fri 12 Jun 2020 14:28
Has anyone actually bought these? I've only seen a couple of YouTubers use them in throwaway test builds, because they were free samples.

I like RGB, but the vajazzled look is a bit too far unless the rest of your build also resembles a magical crystal garden…
Posted by pastymuncher - Fri 12 Jun 2020 19:05
C17 at 4400mhz is excellent albeit at a whopping 1.5v!! The look of these kits is just terrible though. It's bad enough that they are RGB but to bling them up with this tacky looking crystal finish is just awful. How about some sticks at these speeds with decent plain heatsinks for those of us that don't want our pc's looking like a 80's fairground arcade?
Posted by sinhaomar - Fri 12 Jun 2020 19:29
Cool! Really has anyone bought it?
Posted by Friesiansam - Sun 14 Jun 2020 11:22

pastymuncher
How about some sticks at these speeds with decent plain heatsinks for those of us that don't want our pc's looking like a 80's fairground arcade?

I could go with that but, I'm not wasting money on ridiculous RGBling that I don't want to see and never will see, once the case is closed.
Posted by Gentle Viking - Mon 15 Jun 2020 16:02
Well im no fan of RGB either, but that factor was not a factor here as the my RAM at least in the speed class i wanted ( 3600 mhz ) was cheaper than non RGB RAM.