Humble memory can sometimes be overlooked in a system. But buying the right sticks yields ongoing benefits for multiple builds, be they Intel or AMD.

The recent talk of DDR5 on next-gen platforms is just that. Right now, DDR4 reigns supreme and will continue to control the lion's share of the total desktop market well after DDR5 makes it bow.

G.Skill wants the enthusiast to consider its top-bin memory for that upgrade or premium build. The firm's Trident Z Royal Elite is available in 44 configurations based on module size, latency and speed. Of most interest to us is the recently released DDR4-3600 touting lovely, tight CL14 latencies.

Available in silver or gold trim, capacities range from 16GB (2x8GB) through to 128GB (8x16GB) for HEDT systems. As we like to run a 1:1 ratio for memory controller and DRAM, having the lowest possible latency plays well, hence this kit's introduction.

Our sample kit is known as the F4-3600C14D-16GTESA. Doesn't mean all that much until you factor in the CL14-14-14-34 timings at those 3,600MHz speeds. This combination requires the operating juice to be bumped up to 1.45V - the higher end of the enthusiast scale - but no fan is needed or included. Instead, G.Skill uses tried-and-trusted Trident Z heatspreaders sandwiching the crystalline light bar we've seen a few times before.

The Elite visual differentiator is the rather cool heatspreader design. Ridged chrome triangles reflect light at multiple angles. The effect is especially decent if there's plenty of RGB in the system already. Even if that's not the case, the bar's RGB ensures there's a decent amount of illumination. Be warned the modules love fingerprints, so G.Skill wisely pops in a cleaning cloth.

Think of these as materially reskinned Trident Z sticks. You'll be able to use them in a wide range of motherboards, from AMD B550 to Intel Z590. G.Skill has a handy QVL list on its site but we expect any decent enthusiast board to handle them easily. Operation is a simple matter of installing them, activating the XMP in firmware, and then booting into the OS. The sample modules worked first time on our Z590, X570 and B550 boards.

We'd prefer the fin sections to disappear, leaving the crystalline light bar to do more of its RGB stuff. Standing at 44mm tall, it's worth measuring up as to whether they may foul the most overbearing air coolers. Many will use this memory with AIO watercooling which effectively negates this potential issue.

It's normal to pay a very handsome premium for that last morsel of performance. These modules retail at around £220 for the 16GB pack, compared to, say, £90 for an identical capacity touting DDR4-3200 speeds at CL16 timings. The prosaic truth is no-one is producing 3,600 CL14 memory cheaply, so whilst the Royal Elite is undoubtedly expensive, its performance peers are too. Bottom line is that you're not looking at this pack if value is of any real concern. 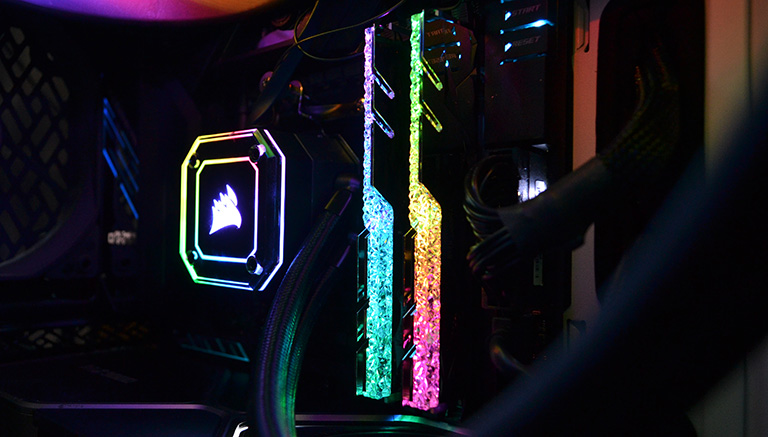 Firing them up in our AIO-equipped test system brings illumination to life. Colours and effects are controlled either by G.Skill's utility or, as we prefer, the motherboard's own program. To that end, the Asus Aura Sync works perfectly on the X570 Formula motherboard.

Let's now run some numbers and see if the Royal Elite can jump to the top of the performance charts.