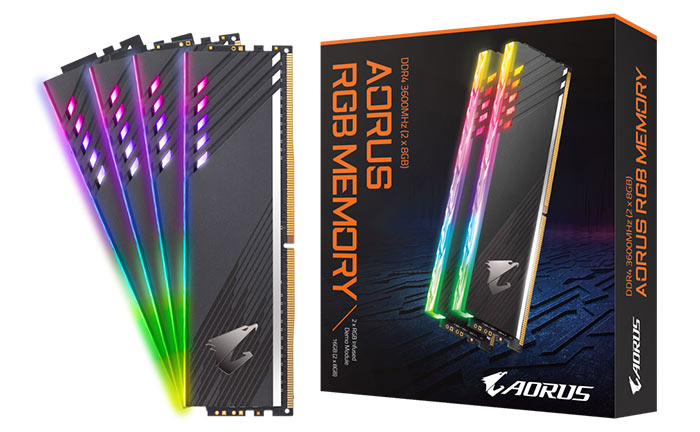 To recap on the prior offering you can head on over to the HEXUS review of the first gen Aorus RGB Memory 16GB DDR4-3200 (GP-AR32C16S8K2SU416R) kit. This reviewed kit offered DDR4-3,200 speeds and 16-18-18-38 timings allied to the usual enthusiast-level 1.35V. A HEXUS approved award was given to the memory kit thanks to the quality construction, appealing light diffusion, and use of Samsung B-die ICs but we thought the kit was literally outshone by Corsair RGB memory modules that had been in the labs previously. 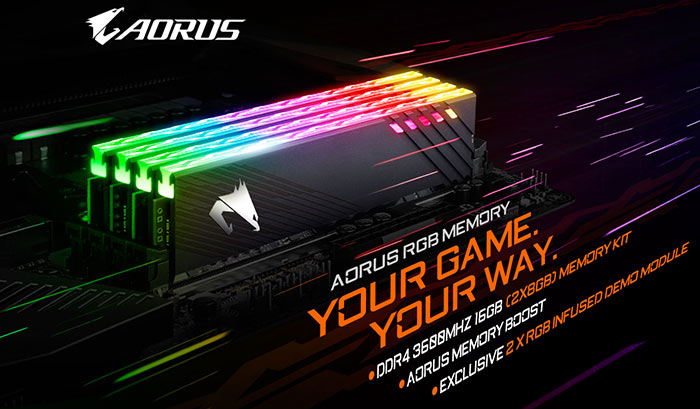 Gigabyte's new modules run at DDR4 3600, however one must note the timings of 18-19-19-39, with greater latency. Doing my sums (using clock speed and CAS latency figures) it seems like the real-world latency of these modules is very similar to their predecessors - about 10ns. Gigabyte mentions that performance can be improved further. On Aorus Z390, X570 motherboards, and XMP enabled on the new BIOS, "users can activate the Memory Boost function and boost their memory frequencies to 3733 MHz without tweaking the timing," it says. That is about a 4 per cent uplift in memory read/write performance. 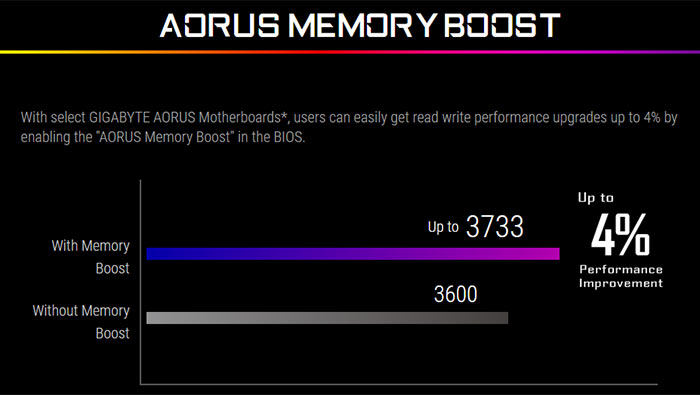 Moving onto the lighting improvements claims, Gigabyte says the new modules (and dummies) include a greater number of built-in RGB LEDs. In our review of the first gen parts we noted that five RGB LEDs were situated behind the memory module diffusers. Second gen modules have 12 RGB LEDs "for a more fluid and robust lighting display". Furthermore, the new modules carry over the light modes from the previous gen and add a "new Wave2 rainbow lighting effect," that can sync with other components. Lighting is controlled by the Gigabyte RGB Fusion app. 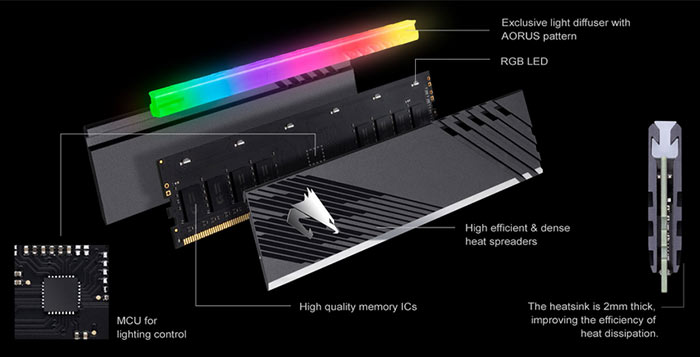 Gigabyte says the new second generation Aorus RGB Memory kits will be available soon. For a guide, the previous gen 16GB DDR4-3200 kits including two 'demo modules' currently sell for about £130, so you will pay a premium to this price.

Posted by Gentle Viking - Mon 11 Nov 2019 15:05
Uuuuu 12 LED's i only have 5 i think in my meager G skill RAM.
And with 48GB installed i am only able to run it at 3300 MHZ as i cant bother with tweaking it further using the little “knobs” in bios.
Posted by Millennium - Mon 11 Nov 2019 15:09
RGB DDR has been considerably more expensive in recent deals than non RGB. We can expect to see a lot more soon in the high end!
Posted by Gentle Viking - Mon 11 Nov 2019 18:08
That was not the case here, even with the first expensive kit i got, also it made no sense to only get DDR4-3200, so i went with the DDR4-3600.
I am not sure if this are still the case now that prices have moderated them self a little.
At first i even dident want RGB, but i figured no one force you to have it on, so RGB was not ruled out.
Posted by Strawb77 - Mon 11 Nov 2019 18:53
“users can activate the Memory Boost function and boost their memory frequencies to 3733 MHz without tweaking the timing,”

does that hold only for this ram or can it work on others?
Posted by Gentle Viking - Mon 11 Nov 2019 19:59
You always have some headroom on ram too, this is what overclockers tap into to boost their system.
Though i have always used enthusiast RAM, but all have been able to run faster than SPEC, maybe not a whole lot, and that's part of overclocking fun to find out how much you can do and still maintain a stable system.
My current system though i run the RAM lower than its SPEC speed of 3600 MHZ, that number i could only do with 15 and 32 GB or RAM, adding 16 GB more to put me at 48 GB mean i had to run it slower as the CPU cant handle that speed with that much RAM.
Its also why overclocking in serious are only done with modest amounts of RAM.
I have tried to run my RAM around 3400 MHZ but that's just too much and the computer boot with a lower fallback RAM speed.
But 3300 MHZ it have done for a week or 2 now with no issues what so ever.

Of course some times you get a lot further if you relax the timing numbers a little, but this need a lot of trial and error to see what numbers change work the best VS what speed you get out of that.
So you go in and out of bios to make changes and then run benchmarks to see if / by how much things get better, and if the system can handle the load.

I dident get around to see if my 3600 MHZ ram could go faster than that, i was happy running it at that speed as i don't really bother much with overclocking anymore.
But i seem to recall tests of my RAM taking them a bit over 3600 MHZ but i cant recall if that was with the stock timings and maybe only a slight voltage increase.