You are here:
Monitors Software News

If you are a multi-monitor user that uses DisplayPort connected monitors with Windows 10 you might have been a bit irked by the way the setup works, especially when it wakes from sleep. Now Microsoft has revealed that it has been working on this problem, and a solution is available to Insiders in OS build 21287 or above.

Recently I have been using multi-monitors a lot, in my case I am plugging a monitor into my laptop for more working space, and occasionally to the TV for content consumption. I've found the way Windows remembers the screen preferences arrangements for the two external displays I regularly use quite pleasing. However, I wasn't aware of any irksome behaviour with DisplayPort, as my laptop only has HDMI.

A recent Microsoft blog post explains that some people experience an "Annoying Unexpected App Rearrangement," with multiple DP monitors. The glitch appears to happen when you wake such a system from sleep and are then faced with application windows that "have unexpectedly moved to a different location of the monitor (sometimes clustered on one screen)". Obviously this can grind on some people's nerves as they have to re-drag application windows to the original, intended positions pre-sleep. 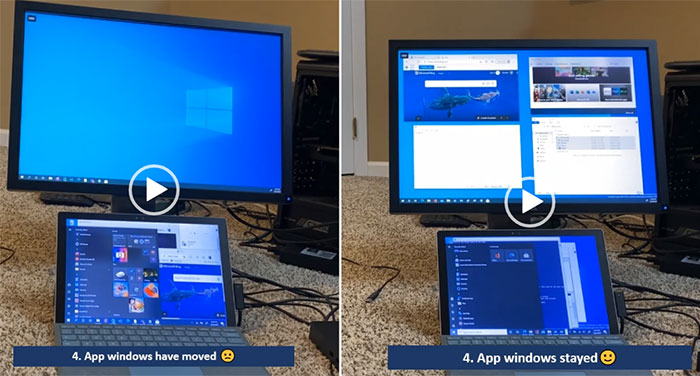 Microsoft says that DP connections are specifically affected by this issue due to Rapid Hot Plug Detect (Rapid HPD). Microsoft's work to mitigate desktop rearrangements due to Rapid HPD are now available in the Windows Insider Preview. It is looking for feedback about its fix before it gets into the general user release of Windows via an update.

If you are using multi-monitor setups in Windows 10 it might be worth a look at the modern PowerToys suite of tools which includes a window manager which makes it easy to save and recall efficient layouts for your workflows. A few hours ago Microsoft updated PowerToys to release v0.37.0 with further improvements to FancyZones.

Posted by Nifl - Fri 30 Apr 2021 13:34
Windows randomly appearing on different monitors when you (de-)attach a monitor has also been a quite annoying problem for a while now.

This is what happens when your QA slogan is “Ship now, fix later” or “Consumer = Tester”.
Posted by Corky34 - Fri 30 Apr 2021 13:53
Not that i expect Microsoft to read the Hexus forums but more of this please, fixing annoyances should have as much, if not more, priority than adding new features.
Posted by Steviepunk - Fri 30 Apr 2021 14:43
Very glad to see this… I've been complaining about this issue for many years, really not sure why this has taken so long to be addressed.

Guess this will finally bring an end to the need to use DP to HDMI adapters (and then tape over Pin 19 on the HDMI cable) to solve this issue!
Posted by ilh - Fri 30 Apr 2021 15:53
How about fixing the order of multiple instances of a program randomly changing in the taskbar? Does my head in when I know that the instance I want is in position X and then all of a sudden it's somehow moved to position y.
Posted by AndyM2012 - Sat 01 May 2021 12:45
I've been using IconShepherd to keep my icons where I put them, but Windows getting it right without needing help will be welcome.