Asus has set up a web page dedicated to helping its motherboard customers get ready for the launch of Windows 11. Though the header image declares "Ready for Windows 11" and features what appears to be some kind of certification sticker, if you read on it says that "a diverse range of Asus motherboards are ready for the latest Windows 11 Insider Preview build." The page goes on to list and link to its newest BIOS files, some marked 'under testing' but others are marked as final and ready for Windows 11. Surprisingly, some 'pretty old' motherboards are getting this Windows 11 update treatment…

Scrolling down Asus' BIOS updates page, you will see that the availability of Windows 11 supporting BIOS downloads is very extensive, and then you will hit a reverse coloured section featuring Intel 2000- and 100- series chipset motherboards. It explains above this section that "The following motherboards are compatible with Windows 11 under current testing. The upgrability is subject to the support from operating system or 3rd party driver availability." Nevertheless, one sees that there are lots of Asus Z270, H270, and B250 chipset motherboards with Windows 11 support. Depending on the board, you might find that support is described as full and final, or as a beta. 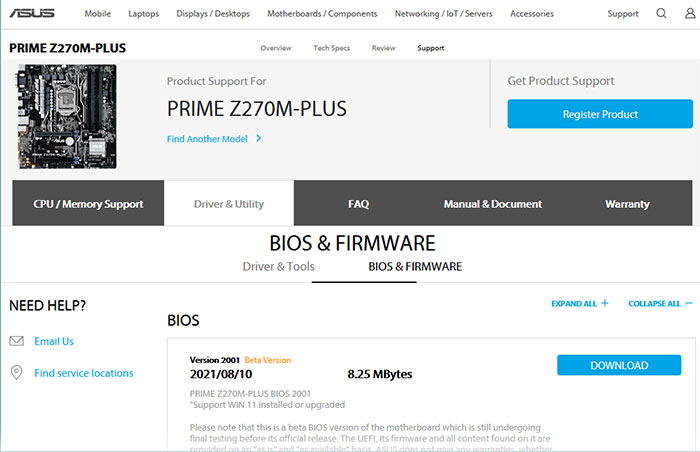 It isn't clear what Asus has done with these BIOS updates – it might simply have toggled the TPM on automatically for the listed boards. In Intel terminology, the TPM is described as Intel PTT in the BIOS menus, under advanced PCH/FW configuration, where available.

Last month, Microsoft executives taking part in an AMA session asserted that Windows 11 hardware requirements won't be flexed any time soon. We know that official minimum system requirements for the installation and usage of the upcoming OS include TPM 2.0, at least 4GB of RAM, 64GB of storage, and a display of at least 720p. For the processors, Microsoft's generational minimum specs were 8th Gen Core for Intel, and the Ryzen 2000 series for AMD. This CPU spec was relaxed for the release of the Insider Preview to include 7th Gen Core processors, and the AMD Ryzen 1000 series.

Microsoft says that it is working on testing and feedback, so it might include the older CPU generations as enabled for the Insider Preview. The Asus updates might be a sign from a big partner that these relaxations could stay, or even reach down to 6th Gen (both 6th and 7th Gen Core processors are supported by the Intel 200-series chipsets).

Posted by Tech49 - Fri 27 Aug 2021 15:34
I really hope they can include 6th Gen , Z170 Maximus VIII Hero support and new bios please.
Posted by Richh - Sat 28 Aug 2021 00:06
My main system is still quite happily running an 8700K on a Maximus VIII Hero, and will continue to be until Alder Lake at least, more likely RPL. It has a TPM installed, so it'll be interesting to see what happens when I eventually get round to trying a Win11 preview build.

Rubarb
Managed to get windows 11 running on an old i7 2600k and to be honest it ran ok, so I know all this tpm etc is just plain bull.
Just nicrosoft being microsoft.

You need to keep up! There's been articles stating that you'll have an iso for cpus/boards that are not directly supported.