It is no secret that Intel is ramping up preparations for the launch of its 12th Generation Core (Alder Lake) processors. Last week at its annual Architecture Day, Intel gave us some pretty deep info about Alder Lake and the technology behind it, due to hit the market starting sometime in October. It only really fell short in not providing any details of the SKUs, or pricing – but that is understandably being kept in reserve for launch.

Another considerable gap in our official knowledge of what new products Alder Lake will precipitate exists in the motherboard market. However, Twitter-based hardware hunter HXL has discovered a treasure trove of Intel chipsets listed inside the Intel Chipset Device Software Version 10.1.18836.8283 this weekend. 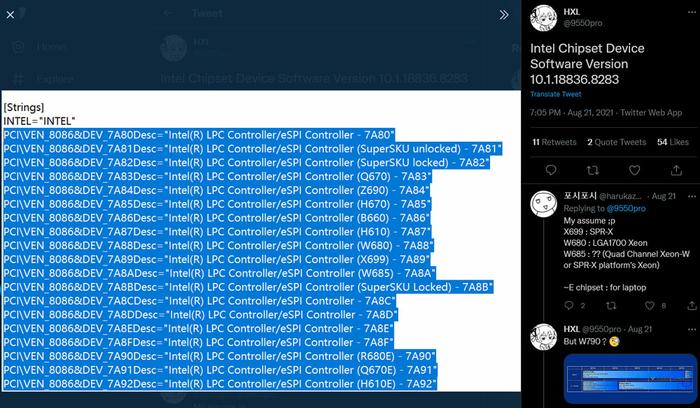 Above, you can see a lot of the chipsets/motherboards that we might expect from any generational launch from Intel, and a few more besides, cementing the idea that ADL is one of the biggest launches for Intel in years.

Quick to catch the eye are the X699, what would appear to be the HEDT successor to 2017's X299. HEXUS reviewed five different X299 motherboards from 2017 to 2019, if you wish to look back at these offerings and what made them attractive. As a quick reminder, X299 supported Skylake-X, Cascade Lake-X, as well as the first two generations of Intel Core i9 processors.

Intel also seems to have some workstation chipsets in the pipeline, with W685 and W680 chipsets mentioned in the driver. A mysterious R690E is also listed – but it is hard to extrapolate what that might be.

A more common or garden but still enthusiast level chipset that everyone must have been expecting is Z690. This will likely feature the headlining goodies of the upcoming platform, such as DDR5 and enough PCIe 5.0 lanes for a GPU, as well as Intel's latest and greatest wired/wireless connectivity/components.

Moving down in the pecking order, you will see H670, which will likely eschew OC support and snip some other thrills/frills. H670 has a laptop (Q) variant listed in the leak too. B660 will be a scaled back offering for mainstream/budget consumers, underpinned by the basic H610 chipset. Among the list, we can also see 'E' suffixed, embedded chipsets. 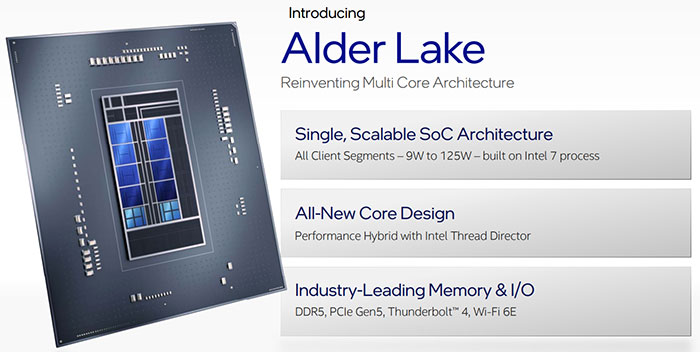 As a reminder, Intel is expected to launch the enthusiast Alder Lake 'K' processors first for desktop, so it is likely we will get to review them first, alongside Z690 motherboards.

Posted by Dashers - Thu 09 Sep 2021 15:18
Finally a potential replacement for my X99 Haswell-E platform. It's done me well, first platform with DDR4 support and we're now moving over to DDR5.

Although honestly, the only “problem” I have with it is no bifurcation support on PCIe so I can't put in multiple M.2 cards on one large slot without getting an expensive RAID controller too.