EVGA showcased the Z590 Dark back at CES 2021 in January, but it has only just got around to making this motherboard available. The EVGA Z590 Dark is now listed in the EVGA web store, and should be on its way to your favourite local retailer too. EVGA has priced the successor to the Z490 Dark at $599 / €519 before tax. 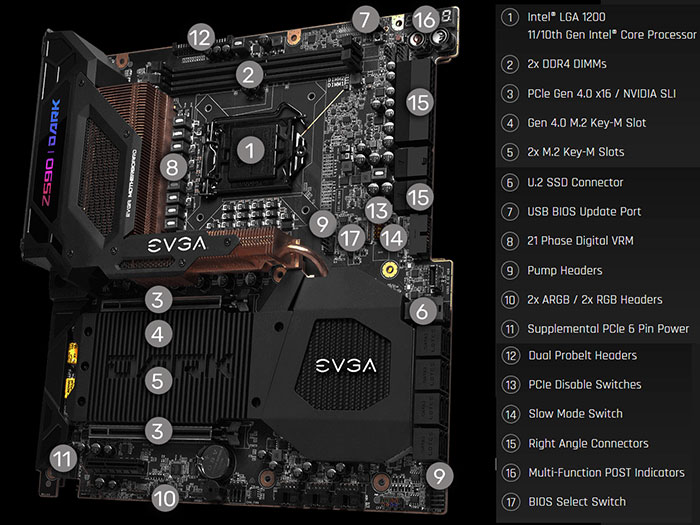 The EVGA Z590 Dark carries over typical features of the line, like the 90 degree rotated CPU socket, twin RAM slots on the upper edge of the board, and a large (21 phase) power section. Compared to the EVGA Z490 Dark, we have been given a new-look overall, plus revised heatsink / cooling designs for the VRMs, chipset, and M.2 slot areas.

It is quite late for EVGA to release this expensive board, for a soon-to-be succeeded socket. Perhaps readers are more interested in the heavily teased EVGA X570 Dark, which is due to be unveiled soon for AMD's AM4 socket processors. Moreover, EVGA is preparing an X570 FTW motherboard model for AMD users, which will probably be released at the same time.

Rubarb
Cough! how much !

To be fair, the Dark boards are *heavily* geared to the ‘overclock to the max’ crowd (for example, despite being a massive board, it only has 2 RAM slots, which is great for memory overclocking, but not so great if you want to upgrade RAM). Point is that if you're seriously considering this board as something you can use all of the features of, you've probably got an LN2 pot somewhere and the cost of the board is perfectly reasonable for what you're getting.

For almost everyone else though, this is not a good board, because you're paying for stuff you will never use - especially with turbo boosting on modern processors.
Posted by Saracen999 - Mon 19 Jul 2021 17:30

Rubarb
Cough! how much !

habilain's post explains a lot, but that was my first reaction, too. Well, a slightly …. fruitier version of that, anyway. :D
Posted by philehidiot - Mon 19 Jul 2021 17:45
Was thinking of getting one of these for the living room media centre PC. With all those heat sinks I won't need a fan.