We first heard about AMD's Smart Access Memory (SAM) at the launch of the Radeon RX 6000 Series at the end of October. In our reviews of the reference graphics cards which were 'released' on 18th November we talked a bit more about SAM, and checked for any differences it could make with the requisite hardware (RX 6000 GPU, Radeon 5000 Series CPU on an AMD 500 Series motherboard). In the games we tested the best results provided mid-teens percentage improvements with SAM turned on, a couple of games didn't see much benefit to SAM and Far Cry New Dawn actually saw a poorer minimum FPS. 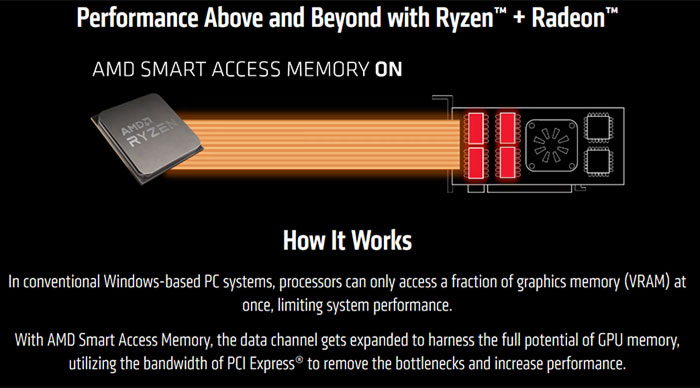 If you are lucky enough to have all the newest AMD hardware in your PC then you might be wondering about turning on SAM. MSI released a beta BIOS enabling the feature nearly a fortnight ago. Asus has done the same for its Z490 motherboards. Just ahead of the weekend Gigabyte released its latest BIOS updates for AMD 500 Series motherboards and they aren't described as a beta BIOS files, so more users might be happy to go ahead with the upgrade.

The latest BIOS version you will want to download and apply to test out SAM is in the bullet points below:

Gigabyte enables multiple upgrade paths and it recommends its own @BIOS or Q-Flash tools. The Q-Flash option even allows users to update their BIOS without even installing a processor, memory, or any graphics cards.

Once your BIOS is updated and you have restarted you can enter the BIOS settings (Advanced Mode) to turn on features such as SAM and Rage Mode. This accelerates games by allowing CPUs full access to the entire gamut of video card memory over the PCI Express highway. It is claimed to be a technique that removes certain memory bottlenecks but its response depends a lot on the game graphics engine.

Reports suggest that Nvidia is working on its own SAM implementation. AMD users with earlier CPUs/Chipsets would appreciate SAM on their platforms too.