AMD 'paper launched' its B550 chipset motherboards alongside the Ryzen 3 3300X and Ryzen 3 3100 processors a fortnight ago. Now the long-awaited mainstream chipset upgrade has been launched by the usual partners, with physical product releases scheduled for 16th June. As a reminder, B550 is the current gen replacement for B450 and brings a number of upgrades compared to that platform, such as; PCIe 4.0, USB 3.2 support via the chipset, and dual-graphics support.

Don't be surprised if the new ranges of motherboards from the AMD partners don't stray very far from the previous gen designs (besides the extras the chipset supports). And it must be remembered that now it looks like you won't need to upgrade from the AMD 400 series chipsets for Zen 3 CPU support, unless you really want to. That is a recent roadmap policy change AMD issued in the wake of the Ryzen 3 3300X and Ryzen 3 3100 processors reviews.

Asus has unveiled its range of B550 boards which are packed with attractive features. All include PCIe 4.0 M.2 and 16x slots, WiFi 6 (on ROG boards), 2.5Gbps Ethernet and USB 3.2 Gen 2 Type-C. Furthermore, the devices and components maker asserts that it has beefed up VRMs throughout the range, and the boards feature ProCool solid-pin connectors and increased DRAM speed. BIOS Flashback is provided for all the boards too.

Asus also wants to draw your attention to its AiMic Noise Cancelling technology on its new ROG and TUF boards, which was previously only a feature of high-end ROG Theta 7.1 and ROG Strix GO 2.4 headsets. This is now built into motherboards to provide clear and noise-cancelled, Ai-trained, mic audio.

Asus has listed 11 new B550 boards in its email to HEXUS but they aren't listed on the official website at the time of writing. More helpfully though, if you head on over to the Asus Edge Up blog it does have a lengthy set of details for each board. Sizes range from Mini-ITX, through MicroATX to ATX.

Gigabyte / Aorus B550 motherboards include the standard chipset goodies but adds special sauce by the way of up to Direct 16 phases of digital power design, with advanced thermal solutions, feature-rich I/O with a pre-installed I/O shield, the latest wireless connection, and Ultra Durable technology.

You can read more about the headlining introductions to the Gigabyte / Aorus B550 motherboards via the official news blog post and Gigabyte has already put up individual product pages for your perusal. I've linked the pages for the five new B550 motherboards in a bullet point list below.

MSI has rustled up 10 new AMD B550 chipset based motherboards. These add to the firm's existing MPG Gaming, MAG Tomahawk, MAG Mortar, MAG Bazooka, and Pro ranges. Again they deliver the key attractions of an AMD 500 series chipset to the mainstream - but this time with MSI tech sauce ladled on top. 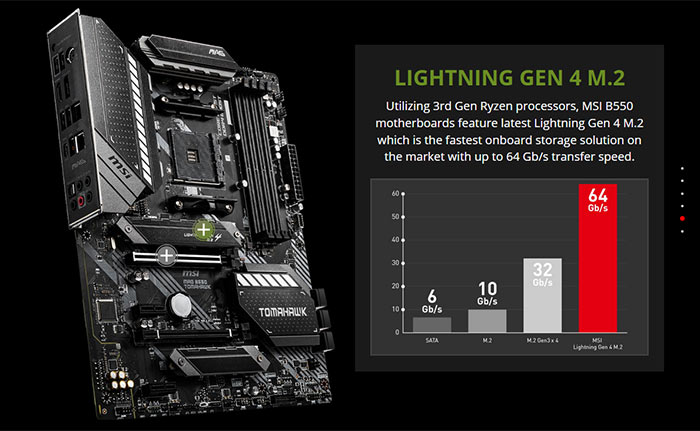 If you are interested in learning more about MSI's B550 offerings you will be glad to know that it has already listed most of its new boards. When I checked some of the pages seemed to be under construction though (using old product details for example).

Posted by rob4001 - Thu 21 May 2020 17:10
No chipset fan :)
Posted by Korrorra - Thu 21 May 2020 20:44
The best boards in terms of looks I've seem so far is the Asrock Extreme4 and some of the strix boards. Also the 1 Gigabyte shown is okay. I still dislike that stupid bird logo. Not liking any of the MSi boards. Then again if they have great VRM and performance… who cares. Now the price will be a factor also. Mostly I would tell people to try and wait for the next chipset launch of boards and cpu's. B550 chipset is the end of the line. If you need a system now though. You gotta do what you gotta do.
Posted by Percy1983 - Thu 21 May 2020 21:38
Just shows the support for \AMD now with how many boards they are making.

Seems a good way of cutting down the x570 without losing too much.

Still happy with my X570 board but may have got one of these if it was available at the time, will be interesting to see more testing on the VRMs and RAM support.
Posted by jimbouk - Fri 22 May 2020 02:08
Wonder how many will be at the budget end? Was looking at a £55 B450 mobo as bells and whistles ain't my thing - be interesting to see what these start from.

jimbouk
Wonder how many will be at the budget end? Was looking at a £55 B450 mobo as bells and whistles ain't my thing - be interesting to see what these start from.

I'm in much the same boat, itching to order a new uATX board but trying to hold off. I notice the Asus Gaming TUF board has a 2.5GbE port, I could be tempted by that.

But some of the B450 boards can be had so cheap…