AMD Ryzen 3 3300X and Ryzen 3 3100 processors became available earlier this month, and the long awaited B550 mainstream chipset was announced at the same time (due to release via motherboard partners from 16th June). With this fork of news came a blog post by AMD Senior Technical Marketing Manager, Robert Hallock. The post resulted in more column inches and comments than the new processors or motherboards could hope for, as people were struck by the confirmation that you will need a 500 series chipset or newer for Zen 3. 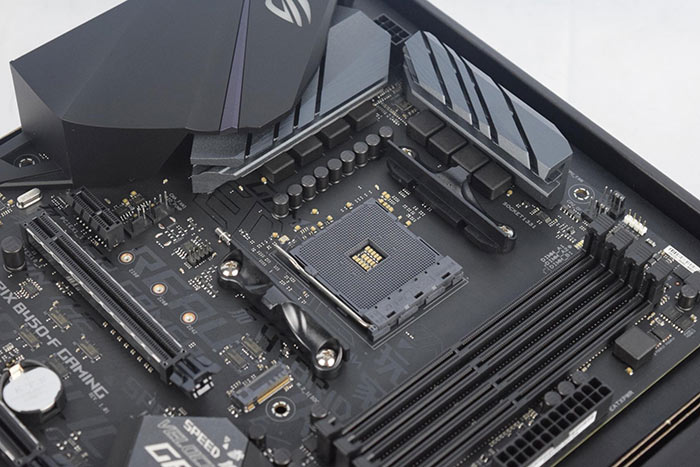 It seems that people had got used to the longevity of AM4 and its associated chipsets and felt that B450 and X470 boards were being put out to pasture rather early. As per my intro paragraph, no one can even purchase B550 boards yet - to ensure a cosy upgrade path to a Zen 3 core packing processor - and lots of mainstream buyers will have recently invested in B450 platforms.

This afternoon AMD is informing enthusiasts that it has had a rethink about enabling Zen 3 compatibility on AMD 400 Series motherboards. It has been picking through tech site comments, social media, and YouTuber hot-takes and decided to do something about the issue. The big news is that it has "decided to change course," and enable an upgrade path for B450 and X470 customers that adds support for next-gen AMD Ryzen Processors with the Zen 3 architecture. 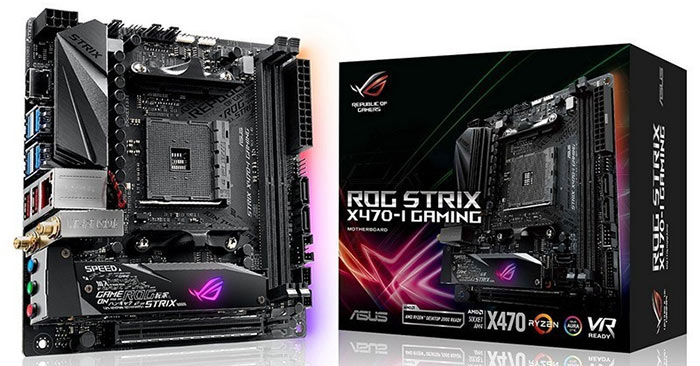 The previous technical blog post about flash BIOS capacity issues still holds true, says AMD, but it will work with motherboard partners, and implement some other measures to make sure Zen 3 gets support on 400 series boards.

Rather than interpret or condense AMD's seven bulletpoint upgrade path plan, it is reproduced verbatim below for your digestion:

AMD admits the decision is "very fresh" and that it might have some potential for mix-ups or pitfalls but will try and make sure any necessary updates are smooth, practical, and achieve the desired goal of the user. It will be ironing out wrinkles in the above process as they get spotted in further planning stages or arise. 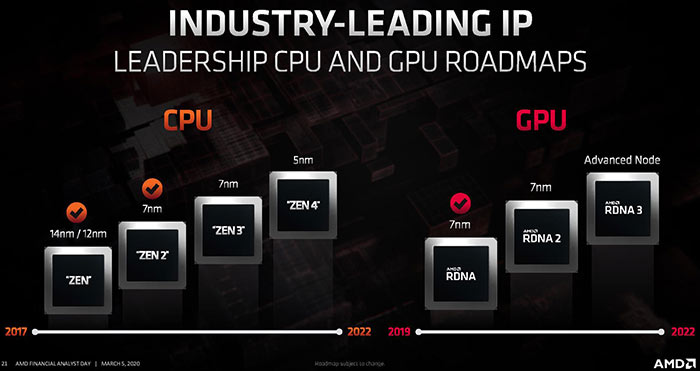 Is now too early to lobby for Zen 4 support?

When the first BIOSes that can enable Zen 3 processor support on AMD series 400 chipsets become available, AMD will follow up with further technical blog post(s) with more details and walkthroughs of upgrade processes. 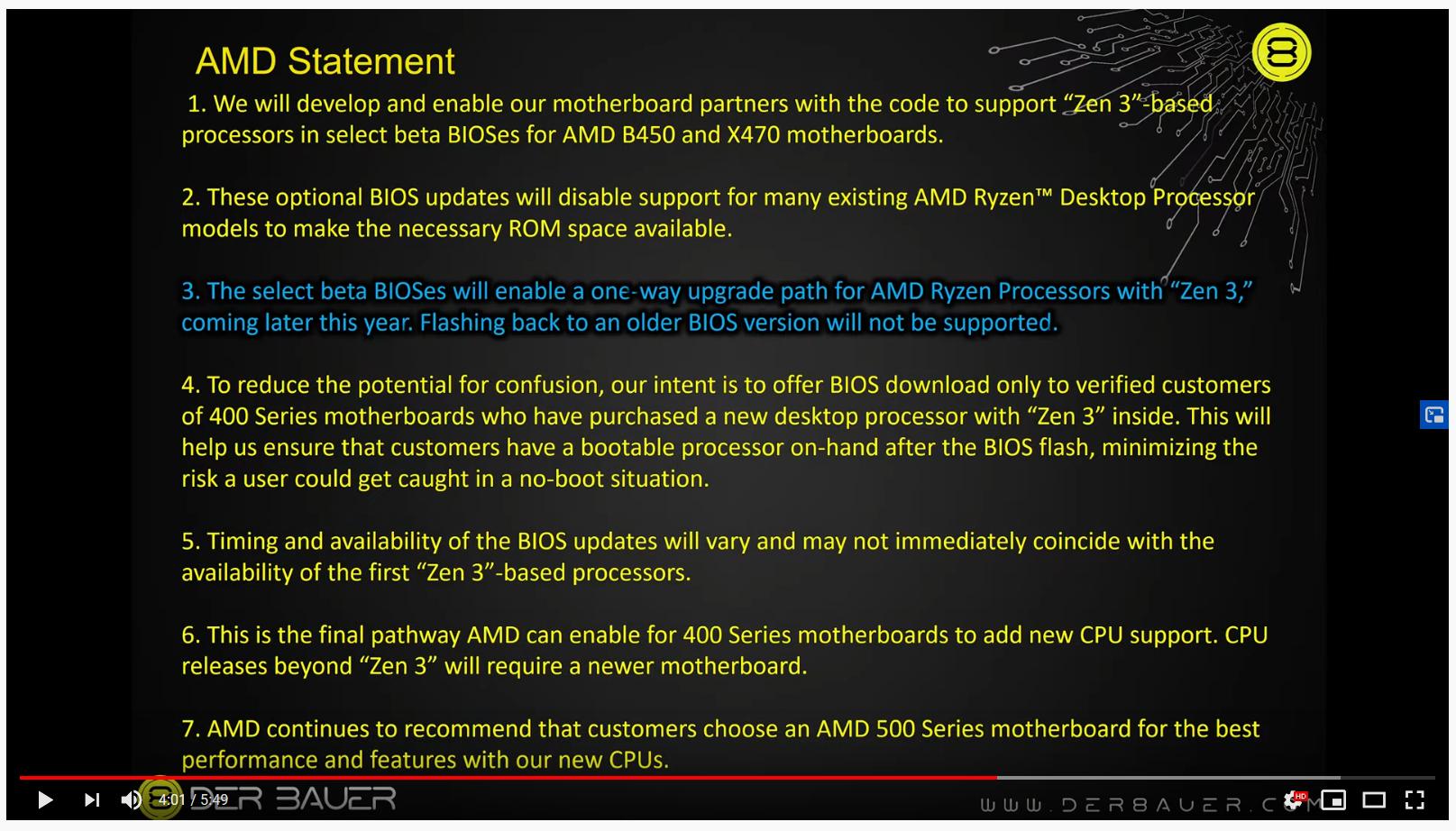 I was almost getting to the point that I wished AMD would just add an extra PIN to Zen 3 just to kill off the nonsense.
Posted by CAT-THE-FIFTH - Tue 19 May 2020 15:22

Kanoe
I'm not sure i agreed with all the negative press around this but it is a bonus the X470 board will support 4!!!!!!! generations of chips.

I was almost getting to the point that I wished AMD would just add an extra PIN to Zen 3 just to kill off the nonsense.

Well,if you look at Zen sales,they skyrocketed with Zen2,and the mainstream chipset was B450. X570 motherboards were £180+ and barely in stock for months. Most Zen2 owners were new users who upgraded in 2019. So it wasn't really nonsense for them,as they were stuck with the same generation. People who bought X470 in 2018,got two generations of CPUs.

The whole 3~4 generations argument was functionally pointless,as it assumed 100% of Ryzen buyers bought it in 2017,which is untrue.

Also people shutting up,achieves nothing,since things like GPP were dropped because of the backlash. AMD got the negative press,after it made statements mocking Intel in 2019,actively calling out competitors for being “bad” by forcing motherboard upgrades. This is partly a hole they got themselves into.

MSI apparently was not at all happy,as they had made massive investments into B450,more than any OEM,so were blindsided by the annoucement. They were going to lose big time as they sold the most B450 motherboards. Companies like Schenker who make custom AMD laptops with Clevo, were promised support for Zen3 in their Ryzen 9 3950X laptops,but were blindsided by it too. Those last two instances were not really fair for the companies involved.
Posted by kompukare - Tue 19 May 2020 15:29

CAT-THE-FIFTH
Excellent news!
Now the ball is in the motherboard OEMs court.

I'd like to think CAT single-handedly deservers a certain % of the credit for this!

Reading between the lines, I'd imagine that certain OEMs (MSI Max) should be able to get both working.
Since Zen is a SOC anyway, you'd have though there would have been some way for AMD to spec that boards should be able to run at a min setting (just enough to flash the BIOS) with even unannounced future CPUs.

Or just spec a really cheap ARM processor on the chipset which can do USB BIOS Flashback. Maybe the logistics and cost of having had to send out those AM4 loan CPUs during the Zen2 launch might incentivise AMD to come up with something like that for AM5.